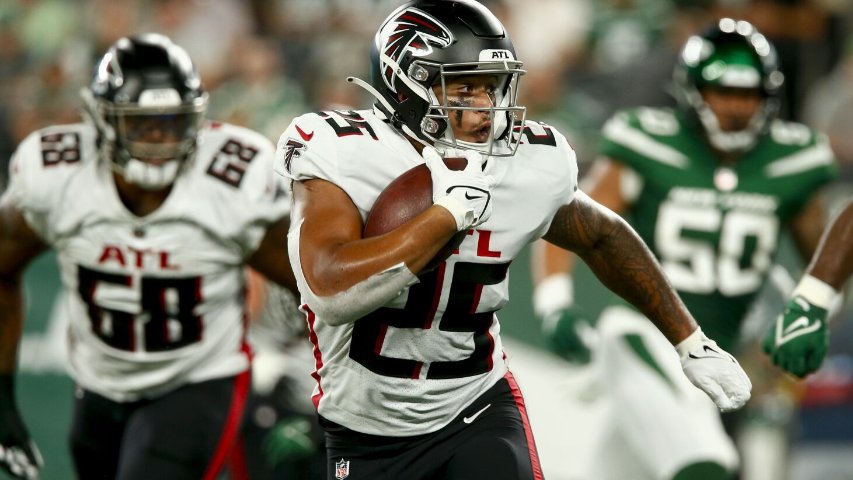 Confused about his inclusion here? Lawrence just had a terrible outing in Philly, turning the ball over 5 times in a rain-soaked loss. But that followed a pair of terrific outings for an offense that ranked among the league’s best through 3 weeks. Even after the debacle against the Eagles, the Jaguars still rank 12th in Football Outsiders' offensive DVOA, 8th in passing.

Jacksonville gets a nice rebound matchup in Week 5: a home date with Houston. The matchup numbers for QBs vs. the Texans don't look so hot, but Houston has benefited from facing the Bears and Broncos. The Texans D does rate better against the pass than the run so far, but sits just 16th in passing DVOA -- 27th overall.

So if that awful Week 4 gets Lawrence dropped in your league – or just keeps him available – don’t be afraid to grab him and consider starting him in Week 5.

We’ll see how long QB Tua Tagovailoa is sidelined, but we know he'll at least miss this Sunday's visit to the Jets. And that means at least 1 start for Bridgewater.

The veteran played well in relief of Tua on Thursday night, completing 14 of 23 passes for 193 yards, 1 TD and 1 INT in a little more than 1 half of action. Now comes a Jets defense that checks in just 29th in DVOA against the pass. The unit has already allowed 3-TD games to Lamar Jackson and Joe Burrow.

Bridgewater is good enough to put up some fantasy points in HC Mike McDaniel’s scheme and with WRs Tyreek Hill and Jaylen Waddle. He inherits an offense that ranks 12th in neutral-situation pass rate, according to RBSDM.com, and has passed more than "expected" in nearly all situations.

Allgeier racked up 84 yards on 10 carries in Sunday’s win over the Browns. Teammate Caleb Huntley matched his 10 rushes, but Allgeier worked clearly ahead in passing situations. That included running 8 routes (among 20 dropbacks) to lead Falcons RBs. Overall, he played twice as many snaps as Huntley and more than 3 times as many as Avery Williams.

Cordarrelle Patterson -- who entered that game with a knee issue -- has since had a "procedure" on the knee and landed on IR. Reports say the team doesn't expect him to be out too long, but Patterson will miss at least the next 4 games.

That not only gives Allgeier a chance to lead the backfield for that span. There's room for him to carve out a meaningful role even after Patterson returns. Atlanta shouldn't want its veteran hybrid handling as many carries as he did through the 1st 3 games.

This Sunday's meeting with the Bucs might be a challenge, but this year's Tampa defense sits just mid-pack in run defense. Clyde Edwards-Helaire just racked up 19-92-1 rushing against it.

The wide range on the bid recommendation leaves room for differing roster situations. If you're in rough shape at RB, then it makes sense to go higher for Allgeier. His opportunity is greater than most RBs who are or will be available the rest of the way. If you're in good shape at the position, though, we wouldn't go crazy trying to outbid your league mates. We're certainly not betting that the rookie turns into anything close to a league-winner.

With Javonte Williams done for the season, every remaining Broncos RB is in play. Melvin Gordon should already be rostered in your league and remains the best bet to lead the reconfigured backfield.

Gordon, however, dealt with a neck injury last week that cost him some practice time and left the field for a stretch in the loss to the Raiders. He also played a key role in that loss by fumbling for the 4th time already this season.

Boone emerged for playing time in Week 3 and wound up even with Gordon on that front in Week 4. He has just 78 career carries and 16 targets across 4+ NFL seasons. But Boone has averaged 5.6 yards per rush. He also caught 65 passes as a timeshare back in college and posted a 71st-percentile speed score as a draft prospect.

Denver has also added Latavius Murray in the wake of the Williams injury. So we'll see just how the playing time gets distributed. The quick turnaround for Thursday night's game against the Colts obviously helps the chances of healthy incumbents.

Here's what HC Nathaniel Hackett had to say about Gordon on Monday: "Melvin is a true pro. This is a guy that's been doing this for a long time. He's harder on himself than anybody. He's part of our team and we love the guy. He knows there was a mishap right there. It's a great opportunity for him to get back out in the field and prove himself. We're excited to be part of it and put him in great positions to be able to make plays. We'll watch him do some good things. We had our first touchdown, two weeks ago. I thought he ran real hard. He's running the ball, really well. He's going downhill, he's exploding through the hole and we want to see that continue. Like I said, he's a true pro and I expect for him to step up and have a great game."

Fresh off outproducing Mark Ingram in Sunday morning's loss to the Vikings in London, Murray found himself plucked off the Saints practice squad to address a Denver emergency. The Broncos, of course, lost Javonte Williams for the season to a double-ligament tear in his right knee.

Murray will at least open behind Melvin Gordon and Mike Boone, and Denver's quick turnaround for the Thursday night game in Week 5 gives him even less of a chance to carve out a role. But signing him away from a practice squad means the Broncos have to keep Murray on the active roster. So there's likely to be some role as soon as he's ready. And with just 94 career opportunities through 4+ seasons, Boone is far from a proven NFL commodity.

Murray ran for 57 yards and a TD on 11 carries in Week 4 and performed solidly for Baltimore's tattered backfield last season: 119 carries, 501 yards, 6 TDs, 4.2 per rush. The 32-year-old doesn't bring a high ceiling at this point, but he can get the job done when pressed into duty.

Doubs lost a fumble early in Sunday’s OT win over the Patriots. Frustrating, sure, but he redeemed himself with a 13-yard TD to tie the game in the 4th quarter. Doubs almost came down with another score later in the 4th but couldn’t hang on after hitting the ground.

The rookie’s 8 targets matched WR Allen Lazard for the team lead and marked his 2nd straight game with 8 looks. He also ran a route on 97% of Aaron Rodgers’ dropbacks.

Doubs is quickly working his way into the WR3 mix and should be owned in fantasy leagues of 10+ teams.

Gallup made his season debut on Sunday, exactly 9 months after tearing his ACL. He caught only 2 balls for 24 yards but scored on an end-zone target. Most importantly, he avoided a setback in the win over Washington.

Dak Prescott is expected to return over the next couple of weeks, so Gallup should begin to creep closer to the WR3 discussion. His upcoming schedule looks nice, too, with Chicago and Detroit arriving over the next month.

Jamison Crowder is expected to miss the remainder of the season with a broken ankle. That loss is key for McKenzie, who should absorb most of Crowder’s vacated slot snaps. The duo has combined for a solid 20% target share through 4 games.

We’ll just need to keep an eye on McKenzie, who’ll work through the concussion protocol. But even if he misses Sunday’s game vs. Pittsburgh, he should return for a huge Week 6 matchup at Kansas City. After that, Buffalo enters a Week 7 bye.

Only 20% owned in ESPN leagues, McKenzie belongs on a roster in 12-team PPR setups.

Outside of a 4th quarter explosion, Arizona’s offense continued to disappoint in Week 4 at Carolina. So Moore’s probably not turning into a league-winner for anyone’s fantasy football team.

Still, his 5 targets Sunday checked in 3rd behind Marquise Brown (11) and Zach Ertz (6) in his season debut — easily beating the mere 1 for Greg Dortch, who had served as the slot fill-in. Moore should at least be capable of approximating what Dortch did through the 1st 3 games. And his talent gives him upside beyond that. Note that he actually drew a downfield target from Kyler Murray, usage that HC Kliff Kingsbury forecasted over the summer. Moore saw only 4 deep targets (20+ air yards) all of last season.

Week 5 presents a tough matchup with the Eagles, but a friendlier Seattle defense waits in Week 6.