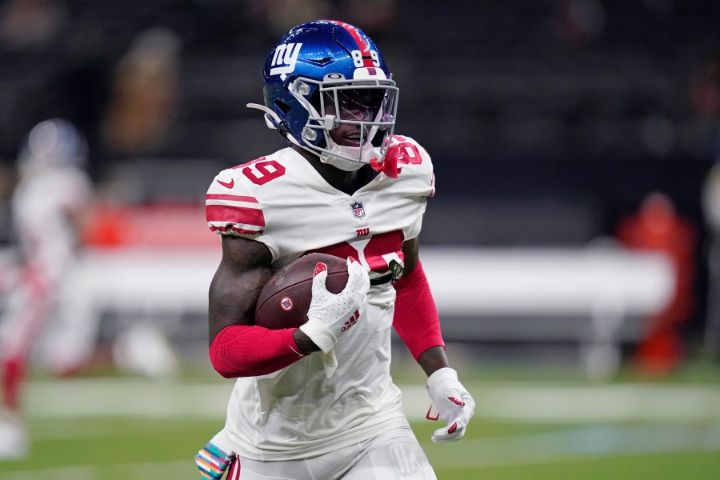 Heinicke predictably struggled against a tough Saints defense in Week 5. The sledding gets much easier in Week 6 vs. a Chiefs defense that can't stop anything. Kansas City has allowed 29+ points in all 5 games so far this season and ranks bottom 5 in adjusted fantasy points allowed to QBs. Remember that Heinicke finished as a top 13 fantasy QB in 3 straight games prior to Week 5.

RB Clyde Edwards-Helaire suffered what looked like a significant knee injury in Sunday night's loss to the Bills. We'll see about the diagnosis, but Williams figures to step in as Kansas City's lead back for however long CEH is out. Williams handled 6 of the 7 RB opportunities after Edwards-Helaire exited. RB Jerick McKinnon got the other and could mix in on passing downs. But Williams will be the Chiefs back to own in fantasy football. He's been solid in spot starts in the past, including 26 carries for 130 yards and a score across Kansas City's first 2 playoff games last year.

Update: Edwards-Helaire is expected to miss "a few weeks" with a sprained MCL. We now slightly prefer Williams to Devontae Booker going forward.

He operated as New York’s clear lead back after Saquon Barkley exited with his ankle injury. Booker turned 14 carries into 35 yards and a score, adding 16 yards and another score on 3 catches. The efficiency figures to be ugly, but volume will make Booker a lower-end fantasy option for however long Barkley is out.

RB Chris Carson missed Week 5 with a lingering neck injury and is uncertain for Week 6, HC Pete Carroll said Friday. Collins didn’t put up big fantasy numbers in place of Carson vs. the Rams on Thursday night, but the usage was solid. He played 71% of the offensive snaps, ran a route on 58% of pass plays, handled 15 of 20 RB carries and saw 3 targets. He’ll be a RB3 or flex play if Carson misses next week’s game vs. the Steelers.

Damien Williams opened Sunday’s game vs. the Raiders as Chicago’s lead back, but it quickly turned into a committee. Herbert ended up out-carrying Williams 18 to 16. The rookie also out-gained Williams on the ground, 75 yards to 64. Williams scored the only rushing TD and out-targeted Herbert 3 to 0. We can’t count on these guys combining for 34 carries going forward. But if Herbert continues getting about half of the work while RB David Montgomery is sidelined for the next 2-4 weeks, he’ll be a useful piece on fantasy rosters.

Despite his 6-78 line last week, Toney hit Sunday available in nearly 90% of ESPN fantasy leagues. He was even more productive in Sunday's loss in Dallas, hauling in 10 of 13 targets for 189 yards. He benefited from the absences of WRs Sterling Shepard, Darius Slayton and, eventually, Kenny Golladay. But Toney has simply been awesome the past 2 weeks. He was ejected for throwing a punch late in the Dallas game, so we’ll have to see if he faces any further discipline. But the rookie should be owned in most fantasy leagues at this point.

Patrick entered Sunday rostered in just 30% of ESPN leagues. He finished it with 9 targets, 7 catches and 89 yards in Denver’s loss at Pittsburgh. All 3 of those totals ranked 2nd among Broncos, as Patrick saw a 23.7% target share. It marked just the 2nd time Patrick has cracked 40 receiving yards this season but kept his season catch rate at a stellar 78.6%. Patrick isn’t always going to win on volume, but he can be a solid fill-in option now that bye weeks are starting.

His 6-75-1 line in today’s win over the Texans was his biggest of the season. But Henry posted 5-36 and 4-32-1 lines on 11 total targets over the previous 2 games. He’s pulled away from Jonnu Smith as New England’s top TE.

He caught all 4 of his targets for 55 yards in Sunday’s loss to the Cowboys. That gives Engram 11 catches on 16 targets over the past 3 weeks. More importantly, he watched RB Saquon Barkley and WR Kenny Golladay leave the game. WRs Sterling Shepard and Darius Slayton remained sidelined. We’ll see about those guys' statuses for Week 6 and beyond, but Engram could be in for big volume by necessity.

Njoku entered Sunday questionable with a knee injury -- and left it with 148 yards and a score on 7 catches. Njoku also posted a nice 3-76 line back in Week 1. But he totaled just 4 catches on 5 targets across Weeks 2 through 4. He’s not someone we can count on in fantasy lineups just yet. But it’s possible that today’s explosion earns him an expanded role the rest of the way.

He’ll start at least the next 3 weeks vs. the Steelers, Saints and Jaguars, with Russell Wilson out with his finger injury. Smith played surprisingly well in relief on Thursday night, completing 10 of 17 passes for 131 yards, a TD to D.K. Metcalf and an INT when Tyler Lockett fell mid-route. Smith added 23 yards on 3 carries. The passing remains questionable going forward, but Smith should continue adding value with his legs. He’ll be a QB2 option at least in that game against Jacksonville.

New England made RB J.J. Taylor a healthy scratch on Sunday and activated Stevenson for the 1st time since he lost a fumble in Week 1. The rookie mustered just 23 yards on 11 carries. But those 11 carries were only 3 fewer than RB Damien Harris, who suffered chest and rib injuries. We’ll see about Harris’ status and where this backfield goes from here, but Stevenson is worth a grab-and-stash in deeper leagues.

The stress fracture in RB Antonio Gibson’s shin is expected to linger all season. That could push Patterson into an expanded role at some point. The rookie put up massive numbers at The University of Buffalo and ranked 7th in the nation in missed tackles forced last year. Patterson is an intriguing stash if you have a roster spot to play with.

The rookie has stepped up over the last 2 games, catching 13 of 16 targets for 135 yards. With the Lions trailing in most games, St. Brown should continue to see plenty of volume.

In just his 2nd game with the Jags, Arnold led the team with 8 targets, 6 catches and 64 yards. With WR D.J. Chark done for the year, Arnold should continue to play a sizable role in this passing game.

Stepping in for Logan Thomas, Seals-Jones tallied 5 catches for 41 yards. His 8 targets ranked 2nd behind Terry McLaurin and represented a 19.5% team share. Thomas is expected to be out through Washington’s Week 9 bye, so RSJ will remain in the mix as a streamer. Next Sunday turns up a positive matchup with Kansas City.