The Texans and Giants each have edge questions to answer after placing key players on short-term IR this week.

First came Jonathan Greenard for Houston. He’s expected to miss 4-6 with a calf injury. That likely means significantly more playing time for veteran Mario Addison going forward. He made his season debut in Week 5 (before the bye) and played 64% of defensive snaps. Only Jerry Hughes played more among edge guys (1 more snap). Rasheem Green trailed them at 61%.

Green has gotten off to a nice start in his 1st year with Houston. The last game marked his largest snap share, but his playing time has been above 50% every week. And he delivered at least a half-sack in each of his 1st 3 games, with 5 total QB hits over that span.

Hughes has been boom/bust, with 2-sack games vs. the Colts and Bears but near-empty stat lines in the other 3 contests.

Addison hasn’t generally been a good bet for stats in his career, with limited tackles and sacks.

The Giants have also lost Azeez Ojulari to a calf injury for at least the next 4 games. That leaves Jihad Ward as likely a full-time player oppoosite Kayvon Thibodeaux today against the Jaguars. Oshane Ximines will factors in as well going forward, but he’s out today with a quad injury.

Thibodeaux – unsurprisingly – is the most intriguing player here. The 5th overall pick in this year’s NFL Draft has already climbed above 80% playing time the past 2 weeks. He notched his 1st NFL sack last time out and has 11 total pressures over the past 3 games.

Elsewhere on the Giants defense, Landon Collins will make his return. A career safety, Collins appears headed for more of a LB role in his return tour with the team that drafted him. We’ll see just how much playing time lies ahead. For now, try not to use any Giants LBs in IDP lineups. 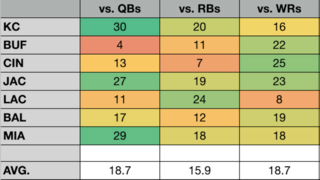