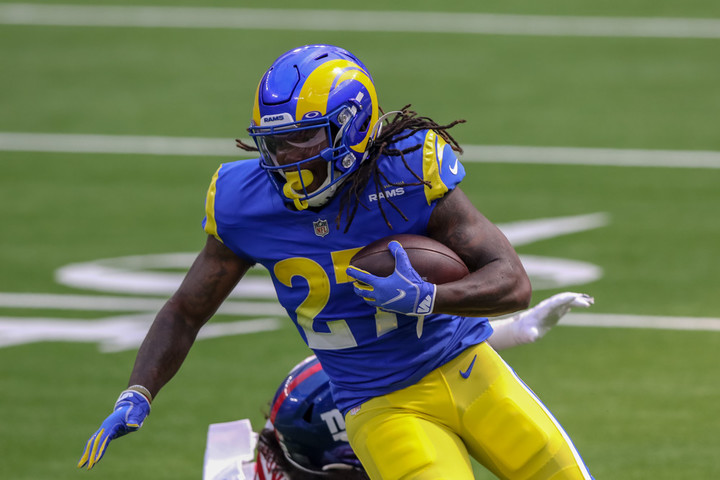 Lawrence comes out of a bye to face a Seahawks defense that was on the field for 68 plays on Monday night.

This is a Seahawks pass D that ranks 26th in Pro Football Focus’ coverage grades; 21st in pass rush grade. They’ve sacked the QB at the league’s 7th lowest rate.

On a macro level, Seattle’s allowing the 2nd most yards per game. And they rank 23rd in passing yards per attempt allowed.

You get it. Sunday sets up as a nice matchup for Lawrence, who’s rushing upside adds extra appeal. He’s hit 6 rush attempts in 3 of his past 4 outings.

Now, if we can just get Geno Smith to put some points on the board...

Henderson was arguably the biggest bust of Week 7. Despite a sweet matchup vs. Detroit, he posted a season-low 7.6 FD points.

The good news? He handled an elite 91.3% of Los Angeles’ RB opportunities. That followed a trend that’s afforded Henderson 18+ opportunities in 4 straight.

Houston obviously supplies another excellent matchup. They’re bottom-8 in fantasy points allowed to the position, while the Rams enter as massive 14.5-point favorites. Their implied total is a whopping 31.25 points.

Patterson's workload turned a corner last time out vs. Miami.

He posted 16 touches to just 4 for Mike Davis. That one turned up 13.1 FD points, his lowest output since Week 1.

Carolina doesn’t supply an ideal matchup. But Patterson’s dual-threat role makes him ideal for cash games. Note that C-Pat has hit 12+ opportunities in 5 straight outings. And his 2 highest touch totals have come over the past 2 games.

The Bills are implied for a slate-high 31.5 points. Diggs has hit 10 targets in 3 of his past 4, and now he comes out of a bye with TE Dawson Knox sidelined. Fire up the former Viking in cash.

Mike Evans will have his hands full on Sunday. Primarily seeing shadow coverage from Marshon Lattimore, here’s how the veteran WR has fared against the divisional foe (courtesy of colleague Jared Smola): 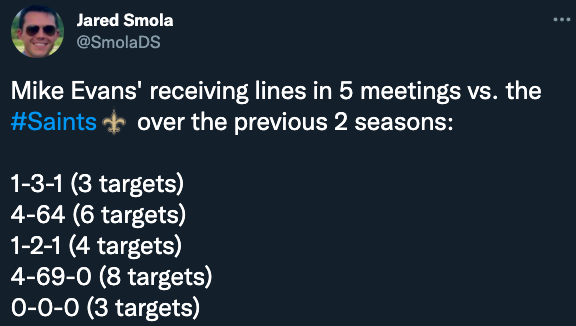 That development — plus the absence of Antonio Brown — figures to help funnel targets Godwin’s way. He already enters this one with 11 targets in 2 of his past 3 games.

Allen’s generally disappointed this season. He’s sitting on just 1 TD despite 39 catches and 8+ targets in 5 of 6 games.

The TD luck should turn around soon, though. His 9 red zone looks have been topped by only 7 WRs. And with Justin Herbert’s high level of play — he’s PFF’s 10th graded passer — it wouldn’t surprise me if Allen’s scores suddenly come in bunches. At $6.9K, he’s just a bit underpriced for the volume and upside he provides.

This week is truly one of a kind when it comes to the TE position. Most of our usual high-end options — like Travis Kelce, Darren Waller, Mark Andrews and George Kittle — aren’t in play. So you’re either paying up for Kyle Pitts, or looking to save some cash.

With Lawrence in play at QB and an ultra-cheap defense below, I think it’s viable to go up for Pitts. He’s clearly the #1 TE in terms of projected raw points and $/point. And you have to love the current form: Pitts has tallied 16 catches for 282 yards and 1 score over the past 2 games.