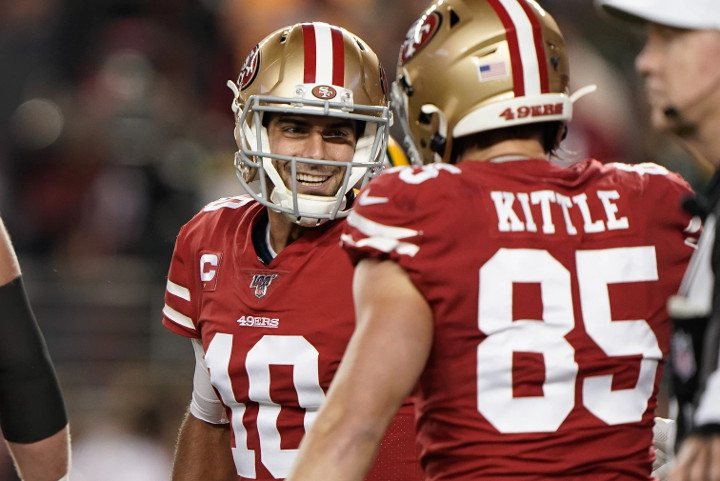 In this game, I expect Garoppolo to have to throw a lot going up against the elite Seattle offense as 3-point underdogs without their top RBs Raheem Mostert, Jeff Wilson and potentially Tevin Coleman.

Kyle Shanahan is a smart coach and obviously the weakness of Seattle is their historically bad pass defense, which has given up by far the most yards in the league, including almost 400 to Cam Newton, who hasn’t been able to do anything since. Seattle has been hemorrhaging fantasy production to QBs all season, allowing QB1 performances in 5 of 6 games, including 4 top-3 results at the position.

Garoppolo should be to get the 300-yard bonus. And if he throws a couple of TDs, he will easily achieve value at just $5,400 on DraftKings this week.

Kittle is an easy stack option with Garoppolo as Deebo Samuel has been ruled out due to injury. Kittle easily leads the 49ers in targets with Garoppolo at the helm. He’s commanded targets on 34% of his routes against zone coverage — and Seattle plays zone at the NFL’s second highest rate, which should boost Kittle’s projection even more.

Tyler Lockett could certainly be used as the run-back option as he leads the Seahawks in targets, catches, yards and TDs coming off a monster 15-200-3 against the Cardinals.

Lockett has 14 more targets than teammate D.K. Metcalf and appears to have a higher ceiling with 2 slate-breaking performances already this season.

Russ has been cooking all year and remains the MVP favorite even after a tough Week 7 loss to the Cardinals in which he threw 3 INTs, including a costly one in the end zone and in OT.

Russ has been a machine this season with QB1 finishes in 6 of 6 starts and has the highest winning percentage off a loss among active players.

The 49ers have also given up the most rushing yards to opposing QBs and the Seahawks may elect to go even more pass-heavy with starting RB Chris Carson expected to miss with a foot injury.

D.K. Metcalf is a good stacking option with Russ as he finally had his first let down game last week against the Cardinals. He should be able to bounce back this week against the 49ers, who are missing stud CB Richard Sherman.

Kittle is the best run-back option on the 49ers as he could see huge volume with Deebo Samuel not in the lineup and the 49ers expected to be trailing.

Herbert has been a fantasy stud of late, finishing as the 2nd highest scoring QB last week only behind Kyler Murray.

Herbert has thrown for 10 TDs in his last 3 games, adding 88 rushing yards and a score. Perhaps most impressively, he was able to light up the tough pass defenses of the Bucs and Saints, who both rank in the top 10. Herbert has been a top 8 fantasy QB in each of his past 3 games.

Herbert to Allen is an easy stack option as Allen has been peppered with 53 targets in just 4 full games with the rookie. With Allen projecting among the league leaders in Week 8 targets and Herbert remaining at an affordable cost, this stack has a chance to put up a huge fantasy day going up against a middling Broncos pass defense.

I like the spot in general for the Packers going up against a pathetic Vikings team in a game with heavy projected winds. Imagining Kirk Cousins trying to move the ball in a bad weather game makes me think the Packers will dominate in time of possession, which should allow 20+ touches for Jamaal Williams (assuming Aaron Jones misses another week with his calf injury).

Jamaal saw excellent usage in last week’s win over the Texans with 19 carries and 5 targets. He should continue to roll against the Vikings, who rank 15th against the run.

Before the bye, Cousins showed us that he is capable of combusting with a 3-INT first half against a non-existent Falcons pass rush and weak secondary.

If the Packers stop Dalvin Cook and build an early lead, it could be a big day for Preston and Za’Darius Smith, who should be able to tee off on the Vikings’ poor offensive line.