Which #3 WRs should we target in fantasy drafts? 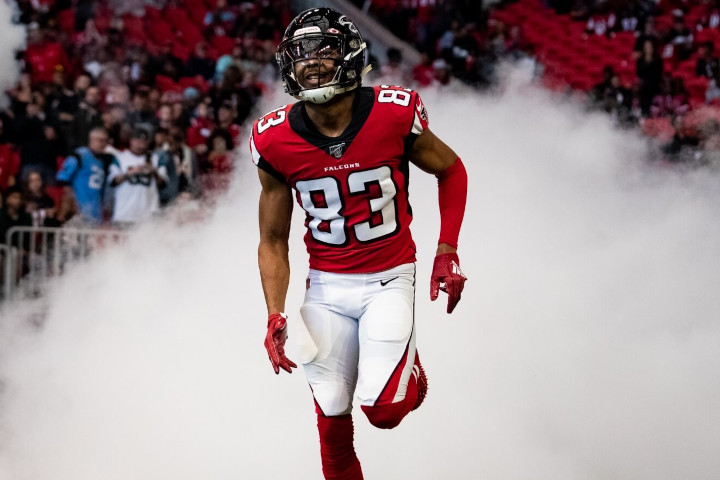 There are more fantasy-relevant WRs now than ever before. Well, probably.

Check out the number of WRs to average 10+ PPR points per game in each season since 2000: 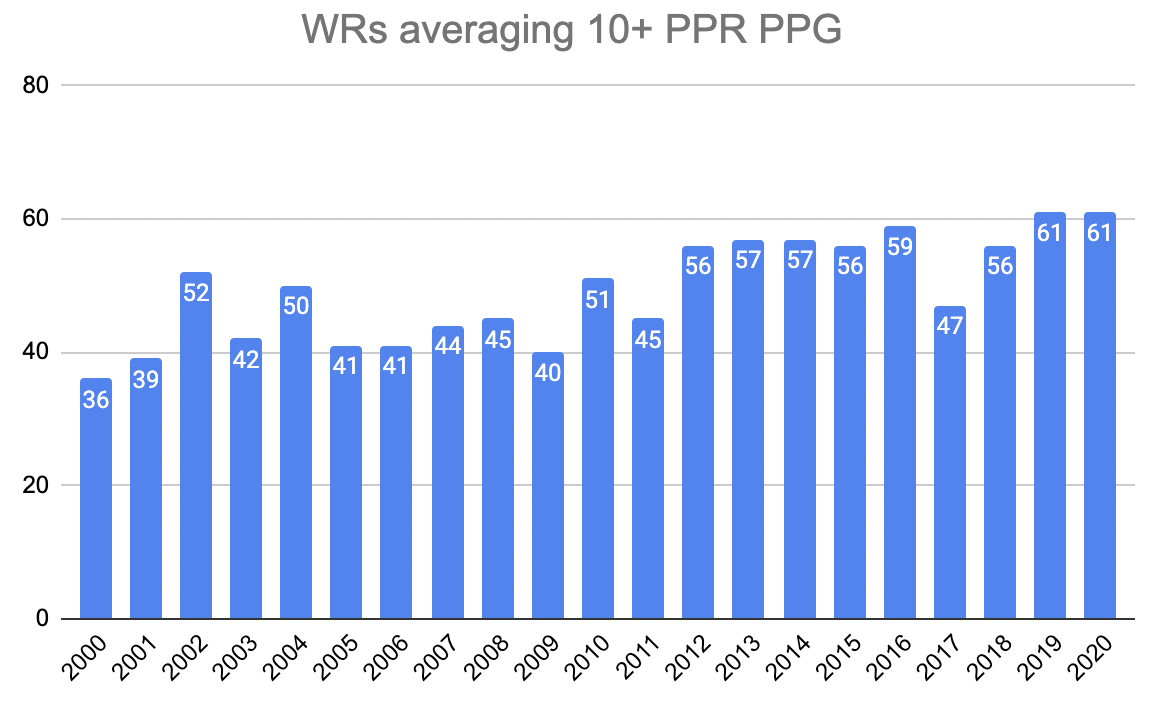 So we can find usable WRs deeper into fantasy drafts nowadays. In fact, many teams’ #3 WRs are worth drafting.

But which #3 WRs should we target?

We, of course, spend countless hours every offseason digging into every team to build the projections that fuel our rankings. But I wanted to look at 2 specific usage stats to see if we could uncover any #3 WRs that might be undervalued -- or overvalued.

Basically, we’re trying to find which #3 WRs will be on the field most often and then how often each team is throwing a pass.

Let’s start with how often the 3rd WRs are on the field. The table below shows the percentage of offensive snaps each team had 3+ WRs on the field last season. For teams with new coaching staffs -- marked with *s -- I used the rate from the team their new play-caller coached last year. For example, Detroit’s new OC is Anthony Lynn, who was with the Chargers last year. So I used the Chargers’ 3-WR percentage for Detroit.

Now let’s combine the 3-WR percentage with situation-neutral pass rate for each team to see which spots might be most and least fertile for #3 WR fantasy production. I made the same adjustments here for new coaching staffs.

The pecking order behind Stefon Diggs in Buffalo will be worth watching closely this summer. The 2020 Bills ranked 1st in percentage of plays with 3+ WRs on the field and 3rd in situation-neutral pass rate. Expect a similar attack in 2021. Assuming Cole Beasley remains the primary slot receiver, the battle will be between Emmanuel Sanders and Gabriel Davis. Most of the team’s beat writers are expecting Sanders to win the job. He’s a nice value in fantasy drafts right now.

These numbers lend credence to the 3 Bengals WRs going in the first 8 rounds of fantasy drafts. We’re still not sure all 3 will pay off their price tags, but Ja’Marr Chase, Tee Higgins and Tyler Boyd will all essentially be full-time players this year.

Not only do Chiefs WRs get to catch passes from Patrick Mahomes -- they also play in a pass-heavy offense that uses a bunch of 3-WR sets. With Sammy Watkins gone, there’s big opportunity available for Mecole Hardman, Demarcus Robinson, Byron Pringle and Cornell Powell. We’ll see how the situation shakes out in August.

With Will Fuller gone -- and likely no Deshaun Watson -- expect the Texans’ situation-neutral pass rate to plummet in 2021. We’ll see about the percentage of 3-WR sets. Brandin Cooks is the only WR in Houston with tangible fantasy value. Nico Collins and Randall Cobb are worth considering only as late-round fliers.

New Lions OC Anthony Lynn won’t necessarily deploy the same offense in Detroit as he did in Los Angeles. I’d at least expect the situation-neutral pass rate to come down a bit But if Lynn continues to run a similar number of 3-WR sets, it’d help likely slot receiver Amon-Ra St. Brown’s chances of fantasy relevance.

With D.J. Chark, Laviska Shenault and Marvin Jones at WR -- and very little at TE (sorry, Tebow fans) -- expect the Jaguars to be near the top of the league in 3-WR sets under new HC Urban Meyer and OC Darrell Bevell. Jones, in particular, looks like a nice value with an ADP in the double-digit rounds.

I’ve talked about the Colts a bunch lately -- in both the Vegas and Stacks articles. Here’s another reason to take shots on their WRs. Last year’s Colts tied for 8th in percentage of plays with 3+ WRs on the field. And, despite many believing that this is a run-heavy offense, Indianapolis was actually middle of the pack in situation-neutral pass rate. I expect 1 and maybe even 2 of Michael Pittman, T.Y. Hilton and Parris Campbell to smash ADP this year.

The Giants don’t fare well here, ranking 24th in 3+ WR sets and 22nd in situation-neutral pass rate last year. Don’t expect much to change in 2021. The team added Kyle Rudolph, so they figure to run plenty of 2-TE sets. And Saquon Barkley’s return might mean even more running. We know Kenny Golladay is the #1 WR. We’ll see who gets those #2 WR snaps between Sterling Shepard, Kadarius Toney and Darius Slayton. The #3 and #4 WRs here probably won’t be viable fantasy options.

Like the Giants, the Raiders project as a run-leaning offense that uses fewer 3+ WR sets than most teams. Henry Ruggs, Bryan Edwards and John Brown will duke it out for the 2 outside WR spots this summer. The loser will be off the fantasy radar. (Hunter Renfrow figures to remain the slot guy but will fall short of reliable fantasy value.)

New OC Mike LaFleur comes from the Kyle Shanahan coaching tree, which tends to deploy a run-leaning attack and a below-average rate of 3+ WR sets. If we get a similar scheme in New York, only 2 of Corey Davis, Elijah Moore, Jamison Crowder, Keelan Cole and Denzel Mims figure to be fantasy relevant. The early signs are pointing toward it being Davis and Moore.

The Falcons under new HC Arthur Smith are 1 of the most fascinating offenses heading into camp. Last year’s Falcons ranked 4th in situation-neutral pass rate and 17th in percentage of plays with 3+ WRs on the field. Smith’s Titans ranked 29th in pass rate and 30th in 3+ WR sets. We’ll see how much of that Tennessee offense Smith brings to Atlanta. I’d expect quite a bit more passing. But with Julio Jones gone and both Kyle Pitts and Hayden Hurst in town, bank on a good number of 2-TE sets. That could be bad news for Russell Gage, who played 64% of his snaps in the slot over the past 2 seasons. We’ll see if Gage or Olamide Zaccheaus (or someone else) wins that outside WR spot opposite Calvin Ridley.