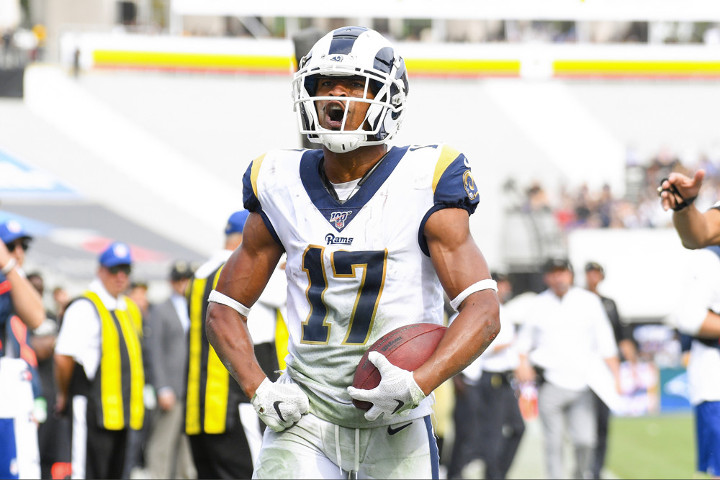 But TD production is also extremely volatile from season to season. Take Chargers WR Mike Williams as an example. Ten of his 43 catches went for TDs in 2018. Then he caught 49 balls last year -- but just 2 hit paydirt.

We can use TD volatility to our advantage, though, by targeting players who underachieved in that department last year and fading those who overachieved.

What Correlates to TDs?

Of course, we first need to determine who underachieved and overachieved. To do that, let's find which stats most closely correlate to TD production at each position. We can then use that information to see which guys scored more or fewer TDs than expected.

The charts below show the r-squared values for TD production vs. other stats for QBs, RBs, WRs and TEs from 2016 to 2018. R-squared values basically measure how closely 2 things are correlated. The higher the number, the closer the correlation.

Turns out yardage correlates most closely to TD production at all 4 positions. It's also worth noting that the correlation between passing yards and TDs is easily the highest. That means we should put more stock into the under and overachievers at QB than the other positions.

Now that we know yardage and TDs are most closely correlated, we can use linear regressions to find how many TDs players should have scored last year based on their yardage output. Let's do that for each position, starting with QBs ...

* Let's start with last year's biggest breakout, Lamar Jackson, who smashed his expected passing TDs by 16.1. Give Jackson 20 passing scores last year and he drops from 1st in fantasy points all the way to ... 2nd. Expect TD regression in 2020, but Jackson is still an easy top 2 QB in fantasy drafts.

* Drew Brees has been an efficient TD producer throughout his 14 seasons in New Orleans, but last year was his most efficient. Brees tossed 1 TD for every 110.3 passing yards in 2020. His average over the previous 13 years: 1 TD for every 141.1 yards. That rate would have given him about 21 TDs last season.

* Jared Goff turned in his 3rd straight top-12 fantasy finish last year. And he did it despite throwing nearly 8 fewer TDs than expected. Give him those 8 scores and he jumps to 6th among QBs in fantasy points. Goff is a nice value at his current QB17 ADP.

* Derek Carr tossed 5 fewer TDs than expected last year and still finished QB16 -- 12 spots ahead of current ADP. With better TD luck, he could return a big profit in 2020. The additions of rookie WRs Henry Ruggs and Bryan Edwards should help.

* If you owned Leonard Fournette last year, you're not surprised to see him at the top of this list. The dude was allergic to the end zone. He ranked 6th league-wide in rushing yards but tied for just 36th in rushing scores. That potentially makes him a big value at his current RB15 ADP -- if you expect him to get similar volume in 2020.

* Devin Singletary is an interesting case. He was a big underachiever in the TD column last year based on this study. But did he really underachieve when he carried just twice inside the opponent's 5-yard line all season? Singletary will likely score more in 2020. But don't expect a huge leap if he continues to get yanked near the goal line.

* On the other end of the spectrum is Aaron Jones. He scored twice as many TDs as expected last year. Dock him 8 scores and he drops from RB2 in PPR points to RB7. Jones is a virtual lock for fewer TDs in 2020. The real question is just how much work he'll lose to rookie A.J. Dillon.

* Christian McCaffrey and Dalvin Cook can survive a dip in TDs and still be elite fantasy options. Derrick Henry's floor is a bit shakier if he doesn't garner a bigger role in the passing game.

* The 2 biggest receiving TD overachievers at WR last year resided in Detroit. Kenny Golladay and Marvin Jones are both likely in for a dip in TDs this season. The difference is that 1 of them is going in the 3rd round of fantasy drafts, while the other is going in the 7th.

* We've talked plenty already this offseason about how big a value Robert Woods is. He finished 14th among WRs in PPR points last year -- despite scoring just twice. Give him his 6.9 expected scores and he climbs to 6th. Woods' ADP is currently at WR18.

* D.J. Moore's breakout sophomore season -- and 15th-place PPR finish -- is even more impressive when you consider it happened in spite of him scoring 3.2 fewer times than expected. With 7.2 TDs, he would have ranked 8th at his position in PPR points.

* Last year's top 3 PPR TEs -- Travis Kelce, Darren Waller and George Kittle -- all scored fewer TDs than expected. Kelce and Kittle both have double-digit TD upside in 2020. A spike in TDs this season should help offset what will probably be a dip in volume for Waller.

* Last year's TE5, Mark Andrews, was the 2nd biggest overachiever in TDs. Expect at least a slight dip in 2020, although Andrews could also see a spike in targets after Hayden Hurst's departure.