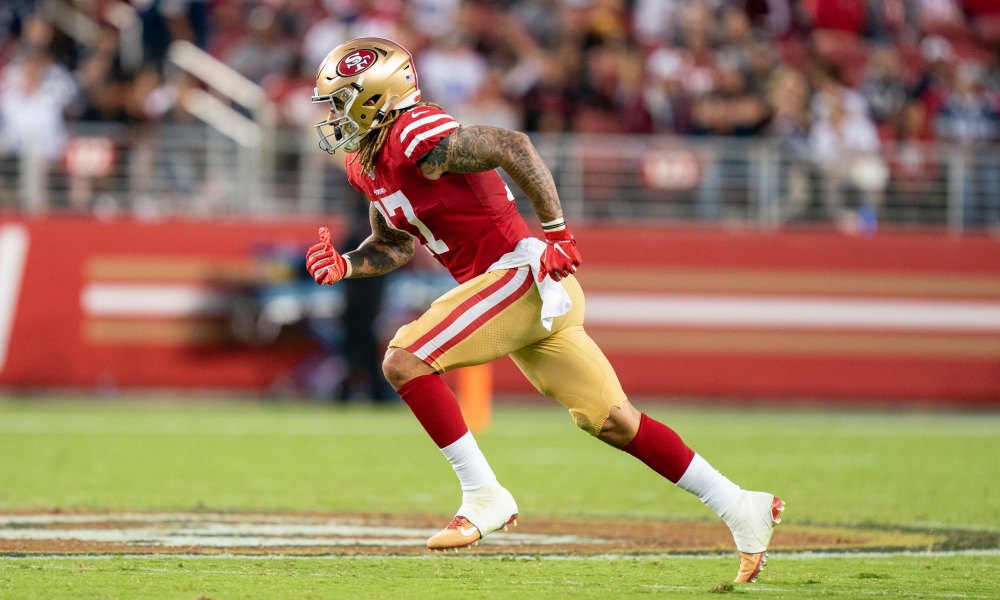 49ers WR Jalen Hurd has avoided the PUP list, although he'll be "eased into action" early on in training camp, HC Kyle Shanahan said. A 2019 3rd-rounder, Hurd has yet to play a regular-season snap due to a fractured back as a rookie and a torn ACL last year. He'll be competing for the #3 WR job this summer.

49ers beat writer Cam Inman calls WR Jalen Hurd one of the team’s “wild cards” entering training camp. Hurd, a converted RB at 6’5, 230 pounds, buzzed during the summer of 2019 only to suffer a back fracture in August. He sustained a torn ACL roughly one year later. Still, the belief is that Hurd will “contend for the wide open #3 [WR] spot,” per Inman. We’ll see how much on-field work he gets in after working exclusively with a trainer this offseason. For now, Hurd is simply someone to monitor in deeper formats.

49ers WR Jalen Hurd is having a Monday morning MRI on "what's believed to be a major knee injury" suffered in Sunday practice, according to NFL Network's Mike Garafolo. The team reportedly fears that Hurd suffered an ACL tear. Such fears tend to be confirmed by testing. We'll keep an eye on this situation, but you should certainly stop drafting Hurd immediately. His absence would leave even more available for Brandon Aiyuk, as the Niners await Deebo Samuel's return to health. WRs Kendrick Bourne and Trent Taylor would also find more opportunity available. Aiyuk is a high-upside option for your fantasy bench. Taylor and Bourne would be late-draft flyers.

49ers WR Jalen Hurd has been medically cleared from the stress fracture in his back that cost him his entire rookie season. "We're ramping him up. We are very optimistic,” GM John Lynch said. "Jalen’s 14 days that we've seen him were lights out. The problem is we've only seen him for 14 days. Jalen knows full well that he needs to work his tail off, so that he can get back and be a contributor and try to earn opportunities to be a contributor for our team moving forward.” Hurd scored twice in last year's preseason opener before being sidelined with that back injury. The 6'4, 230-pound former RB remains an intriguing prospect -- and San Francisco's WR depth chart remains wide open behind Deebo Samuel and 1st-round rookie Brandon Aiyuk.

Hurd expected to be ready for OTAs

49ers WR Jalen Hurd is expected to be ready for OTAs, according to The Athletic's Matt Barrows. Hurd missed his entire rookie season with a back injury. The 6’5, 226-pound RB-turned-WR flashed, though, with a 3-31-2 receiving line in the preseason opener. He remains an intriguing prospect, especially with WR Emmanuel Sanders set to hit free agency. We're not ready to spend a pick on Hurd in early best-ball drafts, but he's certainly worth monitoring this offseason.