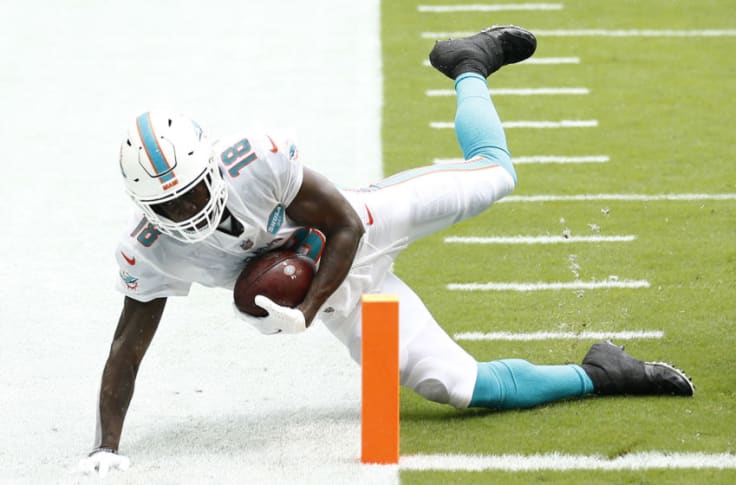 Dolphins WR Preston Williams (foot) will open training camp on the active PUP list. He went down with this foot injury last November, so the fact that he's still not ready to go is a concern. We'll see when he's able to get back on the field. A healthy Williams figures to be Miami's #4 WR this season, behind Will Fuller, DeVante Parker and rookie Jaylen Waddle.

The Dolphins have placed WR Preston Williams on IR with his foot injury. That means he'll miss at least the next 3 games -- and it sounds like it might be longer than that. HC Brian Flores admitted that the injury is "more significant than we thought." Williams is droppable in most fantasy leagues. His absence leaves DeVante Parker as Miami's clear #1 WR, with Jakeem Grant and Mack Hollins behind him on the depth chart. TE Mike Gesicki could also see a volume boost with Williams sidelined.

Dolphins WR Preston Williams suffered a foot injury on his TD catch in the 2nd quarter of Sunday's game vs. Arizona. He was carted back to the locker room and is officially questionable to return. We'll pass along an update when we get one.

Dolphins WR Preston Williams (knee) has been "cleared for football activity," HC Brian Flores said Monday. That's a pleasant surprise after Williams tore his ACL on November 3. He's been running and rehabbing, per Flores, and is now focusing on learning new OC Chan Gailey's offense. Williams tallied a 32-428-3 line on 60 targets in 8 games last year, ranking 36th among WRs in PPR points over that span. Miami made no significant WR additions this offseason, so Williams should open the campaign in 2-WR sets alongside DeVante Parker.

Williams "on schedule" for Week 1

Dolphins WR Preston Williams (knee) is "on schedule" for Week 1, according to The Miami Herald's Barry Jackson. Williams is rehabbing his November torn ACL. He was enjoying an excellent rookie campaign before going down, compiling a 32-428-3 line in 8 games. Williams sat 36th among WRs in PPR points at that time. Miami didn't make any significant additions to its WR corps this offseason, which would appear to be a vote of confidence in Williams. If healthy, he should open the 2020 campaign as a starter alongside DeVante Parker.