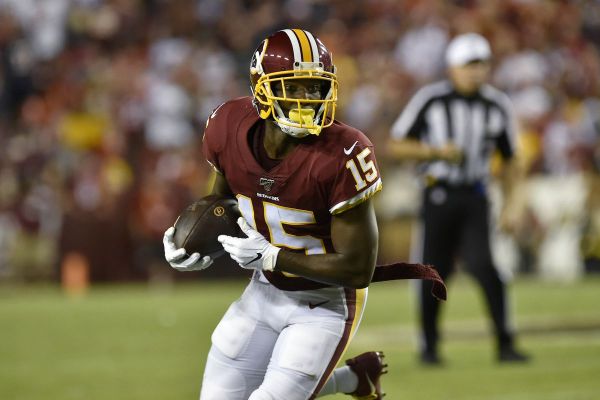 Washington WR Terry McLaurin (thigh) is listed as questionable for this weekend’s game against the Ravens. He was added to the injury report on Thursday and then didn’t practice on Friday, so he appears to be in real danger of missing this one. We’ll get McLaurin’s official game status by noon ET on Sunday. WR Steven Sims (toe) is out for Washington.

Washington WR Kelvin Harmon tore an ACL getting ready for training camp, according to NFL Network's Ian Rapoport. Harmon himself tweeted that he underwent surgery last week. The injury will cost him the entire 2020 campaign. Harmon was the early favorite for Washington's #2 outside WR job opposite Terry McLaurin. Now rookie Antonio Gandy-Golden, Cody Latimer and Cam Sims will duke it out for that spot. We'll monitor that battle but won't be spending draft picks on any of those guys for now. The fantasy winner here is WR Terry McLaurin and, to a lesser extent, slot WR Steven Sims.

McLaurin out for Week 17

Redskins WR Terry McLaurin (concussion) is out for Sunday's finale against the Cowboys. He leaves behind 6.6 targets per game. McLaurin's absence is a boost for WR Steven Sims, who's already racked up 28 targets over the last 3 weeks.

Steven Sims Jr., WR PIT There is no dynasty data for this player.