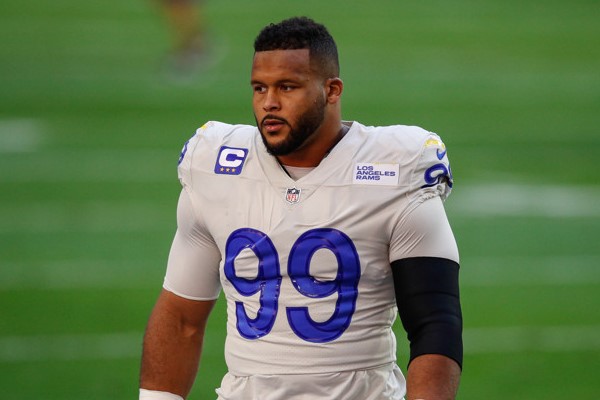 Rams DE Aaron Donald is questionable for Sunday night's game against the Browns with a back issue. He hurt it against the Saints last week but returned to that game. Donald then put in limited practices all week. Here's what HC Sean McVay said about his status Friday, though, according to Pro Football Talk: “He’s playing. It’s a ‘questionable’ because, really, we’re smart with him. He didn’t do some things, but unless something really unforeseen happens, this guy is going on Sunday night.” So keep Donald in your IDP lineups -- especially for a nice pass-rushing matchup.

Rams DE Aaron Donald left Sunday's game against the Saints with a back injury. He is a questionable to return.

Rams DE Aaron Donald has finally gotten his new contract. According to NFL Network's Ian Rapoport, Donald's 6-year extension includes $135 million in total money and $87 million in guarantees. Donald spent training camp and the preseason holding out each of the past 2 summers. In 2017, he missed the regular-season opener but made the other 14 before a healthy scratch in Week 17. We'll see about his readiness this time around, with 9 days until the season begins.

Pro Football Talk reports that Rams DE Aaron Donald has returned to the team and passed his physical. He will not play Sunday, according to Adam Schefter, but Donald should be ready for IDP lineups in Week 2

The Rams have ruled DE Aaron Donald out for Week 1. It's no surprise, given that he has yet to report. But it officially pushes his holdout into the regular season. Missing Donald obviously hurts the Rams' D. But matching up with the Andrew Luck-less Colts keeps them a strong Week 1 fantasy option