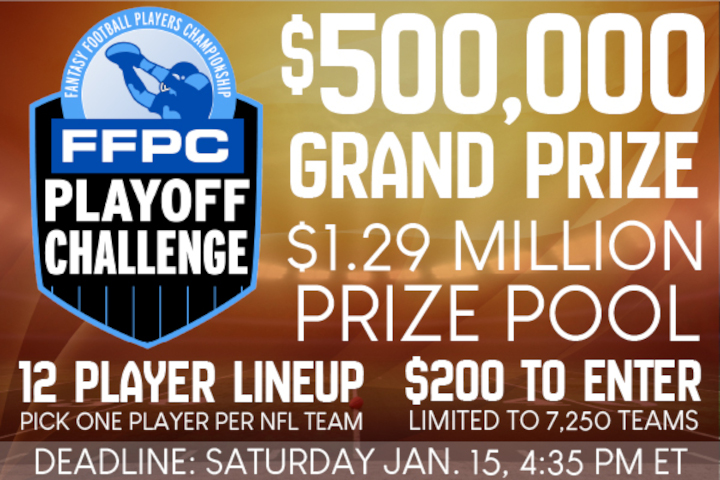 If you've got questions about playing -- or winning -- FFPC competitions, the guests on this episode have your answers ... Eagles GM Howie Roseman threw his support behind QB Jalen Hurts as the team's starter in Wednesday's end-of-season press conference. "We talk about Jalen and the growth he had, really as a first-year starter and second-year player and leading this team to the playoffs," Roseman said. "I’m tremendously impressed by his work ethic and his leadership. The last time we talked was during camp and we said we wanted to see him take the bull by the horn, and he certainly did that." Hurts completed 61.3% of his passes and averaged 7.3 yards per attempt with 16 TDs vs. 9 INTs in 2021, ranking 22nd among 31 qualifiers in QB Rating. He also led all QBs with 782 rushing yards and 10 TDs to finish 10th in fantasy points. We'll see if Philly's actions this offseason match Roseman's comments. If Hurts enters 2022 as the starter, he'll be a lower-end QB1 in fantasy drafts.

Cobb on track to play in Divisional Round

Packers HC Matt LaFleur said Wednesday that he "would anticipate" WR Randall Cobb playing in Saturday's Divisional Round game vs. the 49ers. Cobb has been sidelined since undergoing core-muscle surgery after Week 12. His return would be especially important if WR Marquez Valdes-Scantling (back) is out.

Bucs RB Ronald Jones (ankle) remained sidelined on Wednesday. That doesn't bode well for his chances of returning for this weekend's Divisional Round game vs. the Rams. We'll see if Tampa gets RB Leonard Fournette back from his hamstring injury.

Chiefs RB Clyde Edwards-Helaire (shoulder) was a full participant in Wednesday's practice. That seemingly puts him on track to return for Sunday's Divisional Round game vs. the Bills. It's unclear, though, how touches will be divvied after RB Jerick McKinnon's impressive performance in the Wild Card Round. RB Darrel Williams (toe) did not practice on Wednesday.

Packers WR Marquez Valdes-Scantling (back) did not practice on Wednesday. That follows a limited practice on Tuesday and puts MVS' status for Saturday's Divisional Round game vs. the 49ers in question. We'll get another update on Thursday.

Titans RB Derrick Henry (foot) participated in a padded practice on Tuesday. He still hasn’t been activated off IR, but that’s the expectation ahead of Saturday’s game vs. Cincinnati. "I felt great," Henry said Wednesday via ESPN. "I just wanted to get some pads on. Haven't had them on in a while and got some contact going.” Henry’s last appearance came back in Week 8.

49ers QB Jimmy Garoppolo (shoulder, thumb) got in a limited practice on Tuesday. He stopped short afterward of guaranteeing that he'll start Saturday's game vs. the Packers, saying, "we'll feel it out throughout the week." We're expecting Garoppolo to be under center in Green Bay but will get another update on his status on Wednesday.

Packers WR Marquez Valdes-Scantling (back) got in a limited practice on Tuesday. That seemingly puts him on track to play vs. the 49ers on Saturday after he exited Week 18 with the back injury. We'll get another update on MVS on Wednesday.

49ers HC Kyle Shanahan said Monday that QB Jimmy Garoppolo has a "slight" sprain to his right (throwing) shoulder. The injury reportedly occurred in the 2nd quarter of Sunday's win over the Cowboys. Garoppolo didn't miss any time in that one and is expected to practice on Wednesday, per Shanahan. We'll keep an eye on him.