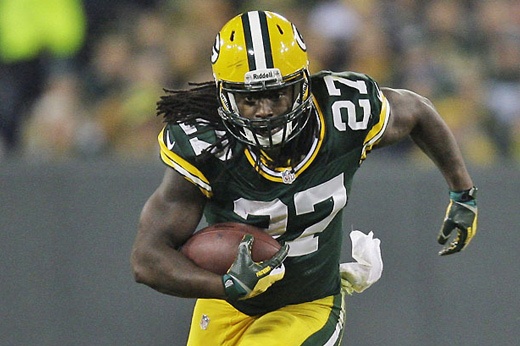 We’re just 2 weeks into the season. Matchups and game flow have a lot to do with the current fantasy football rankings. It’s a tiny sample size, so we don’t want to make any drastic moves at this point.

But there are a few guys that stand out as early buy or sell candidates. We’ve also got a couple of players that are holds for now but could eventually turn into sells.

It’s been a tough start to Lacy’s 2nd season. He mustered just 45 total yards in the opener before leaving with a concussion. He returned for Week 2 but posted just 61 scoreless yards. Lacy currently sits outside the top 35 RBs in fantasy points.

But the slow start isn’t surprising considering the matchups. Lacy has opened against the Seahawks and Jets, who finished 3rd and 4th, respectively, in fantasy points allowed to RBs last year. They look like 2 of the tougher run defenses again in 2014.

Remember that Lacy struggled early on last year, too. He went for 72 yards and a score in Week 1, sustained a concussion in Week 2 and missed Green Bay’s next game. Then Lacy got on a roll, ranking 4th among RBs in fantasy points over his final 13 games.

His 2014 campaign will likely follow a similar narrative. The biggest concern at this point is the Packers' offensive line. But last year’s group finished just 19th in Pro Football Focus’ run-blocking rankings. Lacy has the pure talent to produce even behind a subpar line.

He gets another tough draw against the Lions in Week 3. But then things open up with games against the Bears and Vikings.

Lacy is still the elite RB he was drafted as. And his breakout game is coming soon. Try to acquire him now before it arrives.

We were lower on Allen than most this offseason. And we still think he’ll settle in as a mid-range WR2 in 2014. But you might be able to get him for considerably cheaper than that right now. Allen has totaled just 10 catches for 92 scoreless yards through 2 games.

Like Lacy, Allen has been a victim of matchups so far. He’s opened against the Cardinals and Seahawks, who feature 2 of the best CBs in the game in Patrick Peterson and Richard Sherman.

Allen owners shouldn’t have been expecting a big start. But perhaps they’re frustrated seeing their early-round pick sitting outside the top 40 WRs through 2 games. It’s worth throwing out a low-ball trade offer and seeing if you can acquire Allen on the cheap.

The 2nd-year WR is still the heavy favorite to lead the Chargers in all major receiving categories. He has a string of favorable matchups coming up against the Jaguars, Jets, Raiders and Chiefs.

Plenty of people were calling for a breakout 2014 season from Hopkins. Those folks are probably feeling mighty good about themselves right now. Hopkins sits 19th among WRs in PPR scoring through 2 games.

It looks fluky to us, though. Hopkins scored a 76-yard TD on a blown coverage in the opener. He hit pay dirt again in Week 2 from 12 yards out.

Those 2 TDs have come on 10 targets and 7 catches. 53 WRs have more targets so far. 42 have more receptions.

The Texans have been the run-heaviest team in the NFL so far, ranking 1st in runs and dead-last in pass attempts. They’ll obviously shift a bit more toward the pass going forward, but this team is clearly built to lean on running the ball and playing defense.

And Andre Johnson remains the top dog in the passing attack. He easily leads the team with 16 targets.

That leaves Hopkins as the #2 WR on a run-first offense. That’s not a good spot for fantasy production. Hopkins will likely settle in as a low-end WR3 this season, making him a clear “sell high” right now.

Gates is partying like it’s 2009. The future Hall-of-Famer opened the season with a strong 6-catch, 81-yard outing and then exploded for 96 yards and 3 TDs in Week 2. Gates currently sits 3rd among TEs in fantasy points.

Don’t expect that to last. He’s benefitted from a couple of tough secondaries that have focused on limiting WR Keenan Allen. Gates has capitalized on his team-high 17 targets. His 23% TD rate is obviously unsustainable. And his current 13.6 yards-per-catch average would be his best mark since 2010.

Gates’ numbers are due to regress across the board. His early-season production, plus name value, figure to boost his value in trade talks.

Foster sits 2nd league-wide with 241 rushing yards through 2 weeks. But it’s taken him a whopping 55 carries to get there. That’s a 16-game pace of 440 that would break Larry Johnson’s single-season record by 24.

Foster won’t hit that 440 mark. Hopefully it’s because the Texans start to ease off him a bit. They have a couple of capable backups in Alfred Blue and Jonathan Grimes.

HC Bill O’Brien is a believer in the workhorse back, though, and has said all along that Foster will be the focal point of the offense. That makes him a fantasy stud as long as he’s on the field.

But how long can Foster stay healthy? This is a guy who entered 2014 with 1,386 touches over the past 4 years -- and an extensive injury history. Foster is Sports Injury Predictor’s most likely RB to get injured in 2014. And that risk only climbs with every additional touch he gets.

We’re still early in the season, so we’d ride out Foster a bit longer. He has favorable upcoming matchups against the Giants and Cowboys within the next 3 weeks. But a few more big games -- and big workloads -- would make him a “sell high” candidate.

Most of Smith’s 2014 appeal was his role as the #1 WR in OC Gary Kubiak’s offense. That spot accounted for more than 25% of the team’s total targets in each of Kubiak’s last 10 seasons.

But through 2 games, it looks like the other Smith (Steve) is in that fruitful position. He’s garnered a whopping 25 targets so far. Torrey, meanwhile, has seen just 10.

With that type of volume, this Smith will continue to be a boom-or-bust fantasy option. There’s no point in dealing him now with his trade value at rock bottom. But when his next big game comes, put him on the block and send him to the highest bidder.