Are you looking to sharpen your fantasy football draft skills for your big draft? Take a minute to check out our FREE Fantasy Football Mock Draft Trainer. 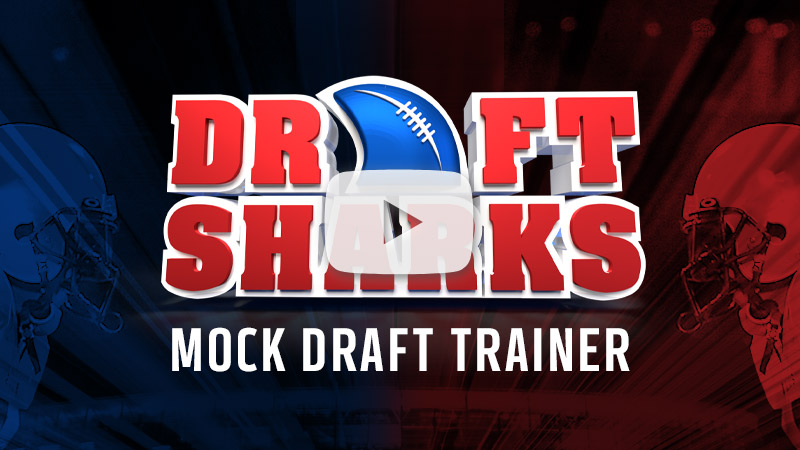 Our mock draft tool is integrated into our Draft War Room, so you’ll also get the experience of using that tool for free.

You can customize your mock draft experience to fit your league’s scoring rules and set up. But here’s also a list of all the league pre-set scoring you can access with just one click:

Here’s a list of all the league sizes you can mock draft:

Here are some features from our Mock Draft Trainer that will help you hone your skills and draft strategy:

If you wanna win your league’s prize money, you need to draft smarter than your competition.

Hone your skills and craft your strategy by mock drafting against our unique computer algorithm using your exact league rules.

You’ll get suggested picks each round -- and feedback on how you’re doing. Once you’ve set up your Draft War Room, you can mock as many times as you want.

Start by entering a username and selecting your basic league scoring. You’ll be able to customize this further using the Edit league settings button.

If you are a DS insider, just click Mock Draft for any one of your teams and you’ll have an instantly customized mock for that league’s EXACT settings.

If you are the first team, just make a pick. Otherwise, click “Start the Draft” to begin

But before doing that, let’s go over some key features we built with you in mind:

First, Along the left, you’ll find the draft log — a rolling list of players and their draft spot.

Players are listed according to DMVP — or Dynamic Most Valuable Player. This is a unique player score determined by a proprietary algorithm we’ve created and tested. It changes

each time you’re on the clock due to factors like player tiers, ADP, your team needs and more.

To quickly find a player out of view, use the search box. You can also click the All tab for an overall ranking of players, or sort players by position.

The “Show Drafted” toggle allows you to control your mock draft experience. So does the “Customize” icon, where you can add or remove the columns you want.

Below, you’ll find LOADS of information on each player, including bye weeks ... ADP … and projections. Plus, you’ll find icons for values, sleepers, injuries, and risers or

This icon will appear next to a player sharing a bye week with someone on your roster. Handy intel — especially for best ball leagues where you want to avoid taking zeros.

Continuing along — the Floor projection is how low we could realistically see a player finishing, barring injury.

Consensus numbers are an aggregate of 38 other fantasy sites, giving you an idea of which players we’re higher or lower on.

Next, you’ll find our baseline projection — what we believe is most likely for each player.

Finally, the ceiling column — how high that player could climb if everything breaks right. The “Low,” “Medium” and “High” labels give you a quick view of how likely each guy is to

You can sort by any of the 4 projections columns.

Moving on — tiers help you measure the drop off in production among players at the same position.

Injury risk denotes a player’s likelihood to miss at least 2-plus quarters. This is based on our EXCLUSIVE algorithm, one fueled by the industry’s largest and most comprehensive

Now, to make a selection — click the green “Pick” button on the right-hand side. Players you select will appear under “My Team.”

You’ll have the ability to flag players and take notes. Just click the star icon, and “Submit.” This will also save a copy in the Draft War Room that’s attached to this league.

As we get into the mid to late rounds, you’ll notice the board automatically toggles to “Upside Mode.” This boosts players who are more likely to “break out” based on the

likelihood of hitting their projected ceilings. Because you wanna swing for the fences when filling your bench.

Not satisfied with the way your board unfolded after a pick? Back up … and make another with the “Undo my last pick” button. When you’re done and ready to mock again, click

“Restart Mock Draft.” This will need to be done before you use the Draft War Room on your draft day.

At any time, you can click over to the “Draft Grid” view. Beyond viewing full results, you’ll be able to edit team names and picks to create different scenarios. You can even mock

draft with keepers. Just make sure this league is marked as “Keeper” on the setup page.