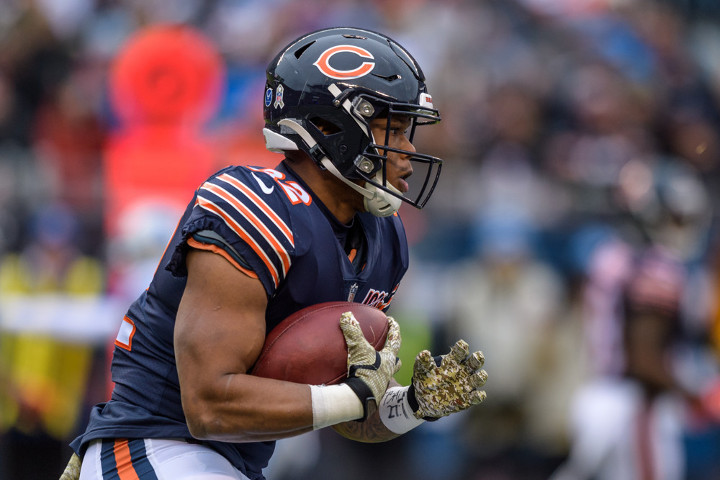 Let’s be honest: This one shouldn’t be easy.

If the CEH owner in your league is wise, that person will realize the rookie is only missing TDs. Perhaps he continues to struggle to push through the pile at the goal line and into the end zone. More likely, though, he finds luck working in his favor a bit more often in that area going forward.

According to Pro Football Focus, 18 RBs have logged 4+ carries inside the 5-yard line so far. Among that group, only Edwards-Helaire (6) and Jamaal Williams (4) have failed to score from that range. The other 7 backs with 6+ attempts from inside the 5 have all scored at least twice.

That’s been his only issue. CEH hasn’t really let owners down, ranking 12th among RBs in PPR points through 4 weeks. But he sits 4th at the position in total opportunities (carries + targets). He also gets a Week 5 matchup with the Raiders, who have allowed 5.3 yards per RB rushing attempt and a league-high-tying 8 total TDs to the position.

We could see a multi-TD game this weekend from the rookie, and you certainly wouldn’t be able to get him after that. Plenty more good spots remain as well. ESPN’s Mike Clay projects Kansas City’s remaining schedule the easiest in the league. Our strength-of-schedule formula finds it 9th most favorable to RB scoring.

Montgomery got workhorse usage in his 1st game without RB Tarik Cohen last week. He played a career-high 85% of Chicago’s offensive snaps. He ran a season-high 37 pass routes. He handled 10 of the 13 RB carries. And he garnered a 14.3% target share.

The good news for you (assuming you’re not already a Montgomery owner) is that the production didn’t follow against a stout Colts defense. (Indianapolis ranks 1st in Football Outsiders’ defensive DVOA and 5th against the run.) The production might not even come this week against an equally stout Bucs defense. (2nd in both defensive and run defense DVOA.)

So you could gamble and wait another week before making an offer for Montgomery. Or just play it safe and go get him now.

Chicago’s offensive ineptitude will probably keep him from reaching RB1 territory. But volume alone should make him a rock-solid weekly starter.

We know this guy’s incredibly athletic. He had an early breakout age at Maryland and went off for 87-1,175-4 as a 2nd-year pro. There aren’t any talent concerns here.

Soon, production should catch up with the talent. Despite sitting 12th in total targets, he ranks just 31st in PPR points. That’ll happen when you’ve yet to find the end zone. Sunday against a banged up Atlanta secondary looks like the last opportunity to buy at a season-low price.

A goose egg in the TD column has masked a promising start to Henry’s season. Here’s where he ranks among TEs in every other metric we care about besides TDs:

So besides TDs — which we know are extremely volatile — Henry is performing as a mid-range TE1. He could be even busier and more productive going forward with RB Austin Ekeler expected to miss the next 4-6 weeks. Ekeler averaged 5.3 targets across his 3 full games, including 7.5 in 2 with QB Justin Herbert.

If you’re searching for that set-it-and-forget-it starter at TE, send an offer out for Henry.

Gurley’s kept his fantasy value afloat with 4 scores. But don’t let that mask his overall struggles.

Check out this rushing (in)efficiency:

- 1.3 yards after contact per attempt (39th among 41 qualifiers, via Pro Football Reference).

Gurley’s receiving role brings more questions. Despite a banged-up Julio Jones and the Falcons getting outscored by 32 this season, Gurley’s targets have gone 5, 0, 2, 1. He’s sitting on 9 receiving yards.

Brian Hill and Ito Smith, meanwhile, have combined for 13 catches for 80 yards.

Watch his games, and you won’t see anything close to the guy who dominated just 2 seasons ago. So unless you’re a Gurley owner with minimal depth, consider putting him on the block for help elsewhere.

McKinnon has scored in every game this season, even though he drew just 9 total touches over the 1st 2 weeks.

The 28-year-old back opened the season 3rd behind Raheem Mostert and Tevin Coleman in the 49ers backfield. Week 2 knee sprains to Mostert and Coleman thrust McKinnon into the backfield lead over the past 2 weeks, though, and he has responded. He ranks 11th in PPR scoring and 12th in non-PPR right now.

But Mostert could return as soon as this week. And Coleman’s injury isn’t expected to affect him long term.

Perhaps McKinnon has worked his way past even a healthy Coleman in touch distribution, but that scenario would still find McKinnon in a backfield committee. He has yet to exceed 14 carries even with those 2 teammates out, and the Niners would likely prefer to limit the touches for a veteran who lost the past 2 seasons to knee trouble, sparked by an ACL tear.

There’s no need to unload McKinnon for the best offer this week, as he should be in for a good outing vs. Miami. But another end-zone trip or 2 against the Dolphins could drive his price even higher.

If you find a desperate owner willing to pay a RB1 price for McKinnon now, though, strongly consider making the move.

Singletary did the impossible last week …

So congrats if you started him — but don’t see the end zone trip as a new trend.

That rushing score — his first of the season — came with goal line back Zack Moss sidelined. We expect him to return for Week 5. That’ll shove Singletary back into a committee, rather than the feature-back workload he’s seen over the past 2 games.

Josh Allen has also remained busy near the paint. His 5 rushes inside the 10 tie for 2nd most among QBs. Singletary’s seen 4 such rushes, although each one has come in the 2 games without Moss.

This move won’t be easy to make. If you have Beckham, he probably just won you Week 4 and might have finally looked most like the Giants version. But don’t lose sight of the whole Cleveland picture.

This season alone, Beckham now sits 10th in PPR points but just tied for 14th in targets and tied for 30th in catches. Football Outsiders rates him 46th among 76 qualifying WRs in DVOA and 45th in DYAR. Pro Football Focus has him tied for just 46th among all wideouts in receiving grade.

Beckham has just 2 games of 100+ receiving yards among 20 with the Browns -- none of those this season. Perhaps Week 4 kicked off a turnaround for a now-healthy Beckham. Or perhaps he merely capitalized on facing 1 of the league’s worst defenses.

To that end, the next 2 weeks bring the Colts and Steelers: Football Outsiders’ #1 and #3 defenses overall (#2 and #8 vs. the pass). Don’t be surprised if Beckham snaps back to middling (or worse) production in those 2 games.

This isn’t to say you should sell Beckham for whatever you can get. We don’t expect him to crash the rest of the way. But as you can tell by our WR20 ranking for him across formats the rest of the way, we’re also not betting he’ll deliver WR1 production.

This is a HOLD-leaning-toward-BUY call. If only because Drake can likely be had for peanuts. Here are just a few tweets from Drake owners from a quick Twitter search today:

“Started Kenyan Drake four weeks in a row, four weeks of pain. Why do i do this to myself”

“Kenyan Drake is dead to me”

“I want my pick back”

So yeah, the Drake owner in your league is probably looking to get rid of him. And we’re not opposed to buying him on the cheap.

There are some reasons for optimism. Drake ranks 7th league-wide with 67 carries. And while he’s seen just 5 targets, he ranks 14th among RBs in pass routes. That suggests that more targets are coming. For perspective, the RBs sitting 13th and 15th in routes have seen 17 and 16 targets, respectively.

That said, we’re not recommending an aggressive pursuit of Drake on the trade market because we’re not expecting him to return to 2019 levels of production. The Cardinals running game just isn’t humming like it did last year. And Drake doesn’t look like the same guy. Among 36 RBs with 30+ carries, Drake ranks 31st in yards after contact per attempt and 34th in Pro Football Focus’ Elusive Rating.

“It’s something I think we’re sorting through,” Kingsbury said of Drake’s performance. “We know he’s a tremendous player, we know what he can do when we’re rolling in the right direction. He’s very dynamic in space and he’s not afraid to stick it up in there as well. That’s kind of the top of the checklist is how do we get him going over the next 12 games?”

We’ll see if Drake can get things turned around. If you own him, there’s no point in selling for 20 cents on the dollar. If you don’t, maybe get a price check. He’s worth a shot if you can acquire him for 20 cents.

New England would probably prefer that its backfield frustrates fantasy owners the rest of the way. If we don’t know where the touches will go and production will come from, then opponents would probably be guessing as well.

But the Patriots will at least go 2 more games without RB Sony Michel. So there’s room for Harris to build a little on his 100-yard season debut. That’s especially true vs. a non-scary Broncos defense and with QB Cam Newton a Week 5 question mark.

If you snagged Harris off waivers amid his IR start to the season, you have nothing to lose by seeing what comes next for New England’s latest backfield producer. And if you drafted him and then hung on, then this is what you were hoping for.

Unless you get a strong offer this week that enhances your team, let’s see what Harris can do for an encore.