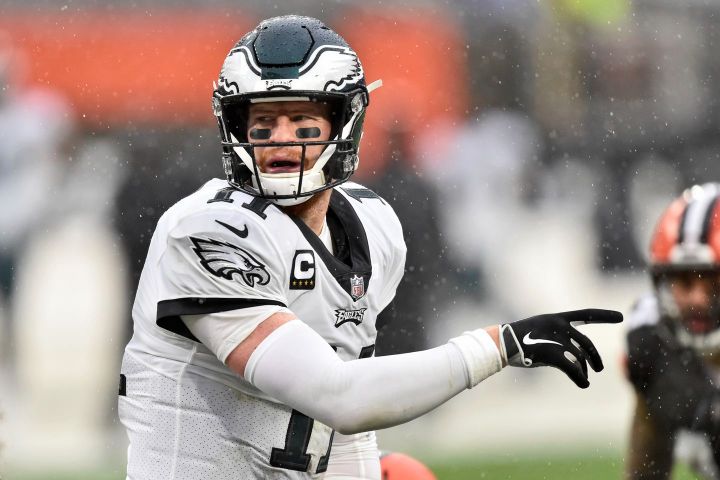 No defense has allowed more fantasy points to QBs this season than the Seahawks (though the Buccaneers are trying real hard to catch up).

This Monday night finds that gimme matchup facing a QB who is struggling so bad that his coach is talking about increasing the rookie backup's snaps.

Carson Wentz has finished QB16, QB24 and QB24 over his past 3 outings, against the Browns (minus DE Myles Garrett), Giants and Cowboys. HC Doug Pederson says Jalen Hurts will see "increased playing time" against the Seahawks.

So will Wentz let us down again ... or rebound?

On the Seattle side, of course, there's not much to question. We know what Russell Wilson and his top 2 wideouts are awesome. And the Seahawks even get RB Chris Carson back for this game. They arrive with the slate's 6th highest implied point total.

Let's get to the individual values ...

TE Jacob Hollister seems interesting in a similar vein. But after seeing 7 targets and a season high in playing time Week 9 at Buffalo, Hollister has played just 19 total snaps and seen 4 total targets in the ensuing 2 weeks. That Bills game marks the only time this season that Hollister has run more routes or played more snaps than Will Dissly.Freddie Swain and David Moore are questionable for this game. Seahawks HC Pete Carroll said Saturday that he expected Swain to be ready for the game but reportedly didn’t seem so optimistic about Moore. That’s good news for Swain and his minimum salary. He hasn’t topped 4 targets in a game this season and has caught just 10 balls in all. But Moore has caught 3+ passes 6 times and averaged 2.4 receptions per contest. Their combined shares make for terrific upside at a $200 showdown salary.

This week marks the 1st since TE Greg Olsen landed on IR with a foot injury, and Dissly looks like the favorite to lead the position in his absence. Of course, both guys figure to gain playing time. And the whole position gains intrigue because the Eagles have provided the 5th-largest matchup boost to TE scoring.

Of course, the big question for this game just might be whether Carson Wentz is capable of capitalizing on the still-excellent matchup. The Seahawks continue to provide the league’s 2nd-largest scoring boost to QBs, according to our adjusted fantasy points allowed. And even though the pass rush has improved with DE Carlos Dunlap’s arrival, Seattle still rates just 27th in pass-defense DVOA.

We’ll see what Jalen Hurts’ expanded role looks like, but I wouldn’t let that steer me away from playing Wentz. Hurts has averaged just 3.1 snaps per game through 10 contests, including just 7 total snaps over the past 3 games. He could double that role and still see less than a series’ worth of playing time.

Travis Fulgham checks in cheaper than Jalen Reagor for FanDuel showdowns, whereas they fall in opposite order on DK. Will Dissly also sits $1,000 cheaper than Jacob Hollister on FD -- as oppose to nearly tripling his DK salary.