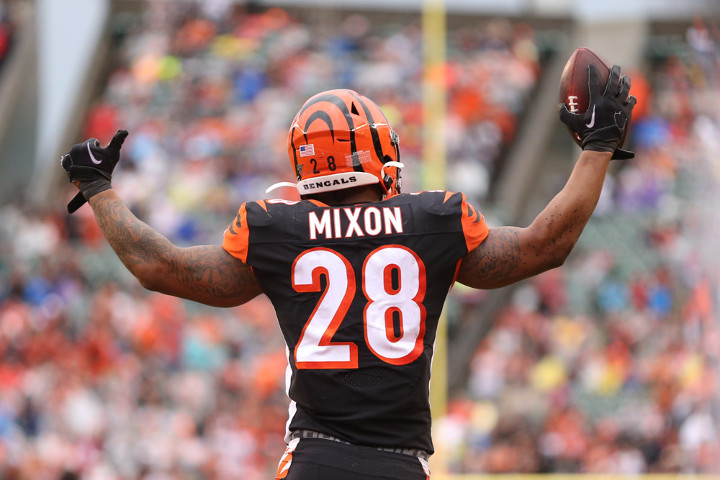 You’d think so. But plenty in this game we love doesn’t make sense. So I wanted to run the numbers to check.

To be blatantly honest, what I found wasn’t all that surprising. But I spent a solid 10 hours compiling and analyzing the data, so I wanna at least share it with you. Deal?

First things first: what’s the best way to measure the strength of an offense? Total yards? Yards per play? Total points? All viable. But for the purposes of this project, I decided to use Football Outsiders’ DVOA, a measure of offensive efficiency that hopefully encompasses all of the traditional metrics. (You can read a full explanation of DVOA here.)

Then I took the top 12 QBs, 24 RBs, 36 WRs and 12 TEs in half-PPR points for the past 5 seasons and matched them up with their teams’ DVOA rankings. For example, Allen Robinson finished 10th among WRs last year, and his Bears ranked 25th in offensive DVOA.

Let’s first look at the overall results before taking a deeper dive into each position.

This chart shows the percentage of fantasy starters at each position over the past 5 seasons that came from top-16 and top-10 DVOA offenses. So, for example, 78% of top-12 QBs played on offenses that finished top-16 in DVOA.

The takeaway here is that offensive strength matters most for QB fantasy production, followed by TEs. It’s less important than you might think at RB and WR.

How about for elite fantasy producers? Here’s what the numbers say …

Once again, we see more elite fantasy QBs come from strong offenses than the other positions. TEs fall more in line with RBs and WRs here.

Here’s a plot displaying fantasy rank vs. DVOA rank for all 60 top-12 QBs over the past 5 seasons:

Jackson, Mahomes and Prescott’s offenses are all strong bets to finish top-16 — and probably even top 8. In fact, the Ravens, Cowboys and Chiefs (in that order) ranked top 3 in DVOA last year.

Another safe bet: Drew Brees, whose Saints have finished top 10 in DVOA in 9 straight seasons. Aaron Rodgers’ Packers have ranked top 15 in all 12 seasons since he took over as the starter. And Russell Wilson’s Seahawks have finished top 16 in each of his 8 seasons.

Only 2 of these guys’ offenses didn’t rank inside the top 16 in DVOA last year. One of them was the Bucs, who, of course, didn’t have Tom Brady last year. The other was Josh Allen’s Bills, who finished 21st. Perhaps adding WR Stefon Diggs vaults Buffalo into the top 16 this year. But Allen might again need to buck the trend to finish as a QB1.

Deshaun Watson’s Texans are a candidate to rank outside the top 16 in 2020. They finished 16th last year and lost WR DeAndre Hopkins. Of course, Houston ranked 21st in DVOA in 2018 — and Watson finished QB4.

QBs outside the top 12 in ADP whose offenses have a good shot to finish inside the top 16: Ryan Tannehill and Jimmy Garoppolo.

We do see more RB1s come from strong offenses, though — 67% from top-half offenses and 50% from the top 31% of offenses.

Looking at the current top-12 RBs in ADP, Christian McCaffrey, Saquon Barkley and Joe Mixon might all be playing on bottom-half offenses this season. McCaffrey and Barkley have proven talented enough to produce regardless of supporting cast. Betting on Mixon at ADP is betting on the Bengals to take a big step forward with QB Joe Burrow.

When pinpointing RB2s, we’d rather have the player be on a strong offense, all else equal. But don’t be afraid to target a guy on a presumed weaker offense, especially if you believe in his talent and, most importantly, volume. This year, that’d apply to guys like Leonard Fournette, Melvin Gordon, Le’Veon Bell and David Montgomery.

So, like at RB, we should lean toward WRs on strong offenses as a tiebreaker. But we can still find fantasy starters — and even WR1s — on bottom-half offenses. I’m looking at you, Allen Robinson, D.J. Moore, Courtland Sutton, D.J. Chark and Terry McLaurin.

Offensive efficiency is important when looking for TE1s — nearly as important as it is to finding QB1s and much more important than finding fantasy starters at RB and WR. Over the past 5 seasons, 67% of top-12 half-PPR TEs have come from top-16 offenses and 42% from top-10 offenses.

Interestingly, though, the numbers for top-5 TEs are basically in line with what we saw for RB1s and WR1s. 68% have come from top-16 offenses and 48% from top-10s.

How we do interpret that? My guess is that elite TEs are elite TEs regardless of their offense. But as we move into lower-end TE1 territory, strength of offense (namely TD upside) becomes more important.

Looking at 2020, Travis Kelce, George Kittle, Zach Ertz and Mark Andrews qualify as the elites. (All are on strong offenses, anyways.) Beyond those guys, we should favor TEs on projected strong offenses. That’s a mark in favor of Jared Cook, plus later-round breakout candidates Blake Jarwin, Jonnu Smith and Jace Sternberger.