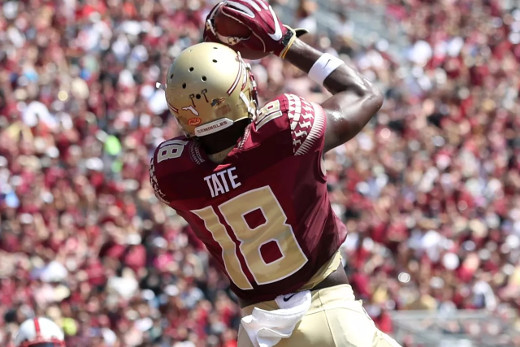 The 4-star recruit chose Florida State over offers from Florida, Michigan and Clemson among others. But a toe injury cost Tate the majority of his freshman campaign.

With 2016 leading receiver Travis Rudolph gone this past year, Tate emerged as a key piece of Florida State’s passing game. He opened the season with a TD in 5 straight games and closed it with a 3-score outing in the Independence Bowl.

Tate led the Seminoles with 10 TDs, tied for the team lead with 40 catches and finished 2nd in receiving yards. And that was despite battling through a separated A/C joint in his left shoulder and missing 1 game with an ankle injury.

Courtesy of Draft Breakdown and Cut Up Corner

Tate is a big dude who plays to his size. He knows how to use his body to shield off defenders and has strong hands in tight spots.

Tate also has the catch radius and timing to high-point the football.

And he has the body control and hands to snag balls thrown outside his frame.

In sum, Tate has some of the best ball skills in this year’s WR class. He posted a 4.76% drop rate this past year, according to Pro Football Focus — 24th among draft-eligible receivers. Combine that with his 6’5 frame, and he’s a QB-friendly target.

Tate isn’t an elite separator, with subpar speed and quickness. But he was just good enough at the college level to be effective on shorter routes.

Tate is a classic film vs. metrics prospect. He was downright dominant at times for Florida State, using his massive catch radius and strong ball skills to come down with everything thrown in his direction. Per Pro Football Focus, Tate hauled in 66.7% of his contested targets last year — 6th best in the country.


But his production — outside of the TD department — was subpar, both in terms of raw numbers and market share. And he bombed the Combine, posting sub-10th percentile marks in the 40-yard dash, vertical and broad jump.

Those results aren’t size-adjusted. But even for a big dude, Tate’s lack of athleticism is alarming. Here, for example, are all WRs who checked into the Combine at least 6’3, 215 pounds with 40 times of 4.65 or slower over the past 15 years:

Only 3 of these guys — Funchess, Kelly and Wilford — got drafted. Only Funchess has emerged as a fantasy asset. Seals-Jones was moved to TE, although he has 15 pounds on Tate.

So the odds are seemingly stacked against Tate.

When and where he goes in the NFL Draft is the final piece of his prospect puzzle. But the value you place on him will ultimately come down to how heavily you weigh his tape and to what extent you’re willing to ignore his measurables.