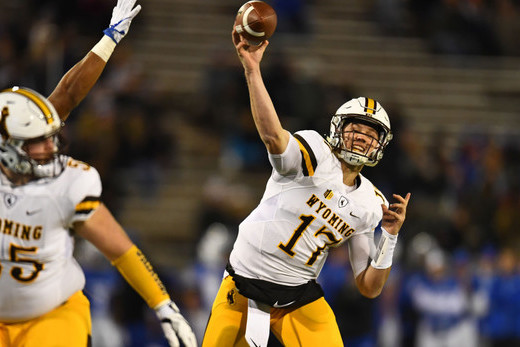 As a 6’3, 180-pounder coming out of high school, Allen drew no scholarship offers from FBS or FCS schools (and turned down an offer to walk on at San Diego State). Instead, the 3-sport athlete -- leading scorer in basketball and a pitcher who could throw 90 mph -- enrolled at Reedley Community College in California.

After sitting behind the starter for the 1st 3 games of 2014, Allen took over the job and racked up 26 TD passes the rest of the way. He also averaged 285 yards passing and 66 rushing per game. Still, only Eastern Michigan and Wyoming offered scholarships -- and EMU yanked its offer after Allen visited Wyoming.

Allen landed at Wyoming in 2015, recruited by the HC and OC that brought Carson Wentz to North Dakota State. Allen suffered a broken collarbone in just his 2nd appearance, though, and took a medical redshirt.

Healthy in 2016, Allen posted a strong stat line for a Wyoming team that reached the Mountain West title game (a 3-point loss to San Diego State). Along the way, Allen endured 4 games of multiple INTs, throwing 2 apiece in 3 of the final 5 weeks. He also enjoyed 6 games of 3+ TD passes. The Cowboy tied for 20th in the nation in scoring tosses despite tying for just 45th in pass attempts.

Allen’s numbers dipped in 2017, when he ranked just 72nd in the nation in passing efficiency. He opened the year by struggling at Iowa (23/40, 174 yards, 0 TDs, 2 INTs) before rebounding against Gardner-Webb (22/32, 328, 2, 0). Allen averaged just 22 pass attempts over the final 9 contests, missing 2 late-season games with an injury to his throwing shoulder. He managed just an honorable-mention spot on the all-conference team.

You don’t have to be a seasoned film scout to catch issues with Allen’s delivery game: primarily the footwork and decision making. But it’s also not hard to see what leaves some talent evaluators dreamy-eyed …

It’s that freakin’ throw right there. (Never mind the TD-erasing bobble on the other end.)

Or this from earlier in that game.

And perhaps some of this.

Allen brings tons of arm to the table. Even his detractors wouldn’t dispute that. But can he take something off that fastball when he needs to? Well, he’s certainly capable …

And the mobility that peeks out from that TD against BYU in 2016 goes well beyond allowing him to move around the pocket. Allen seems to be underrated as a runner. Check those speed and athleticism measurements near the top of this article 1 more time. Now remember just how big he is.

You can see the rushing stats above, and the game tapes show plenty of read option and decent scrambles. Oh yeah, and there’s this escape -- ultimately still for a loss -- that would make Russell Wilson or Donovan McNabb proud …

Here’s another play (against Iowa) that shows Allen’s skill, albeit on a play where he still got tackled for a loss.

Of course, the biggest issue is Allen’s inconsistency as a passer. He throws like he has always gotten by on his combo of both freakish athleticism and freakish arm strength. Probably because he pretty much has. That won’t be enough in the pros.

Here’s Allen effectively ending a comeback attempt vs. BYU in the 2016 Poinsettia Bowl after delivering the touch TD above to get it close.

You just can’t make that throw on 1st-and-10 inside the final 2 minutes while you’re driving for a tying or go-ahead score.

For all the arm he has, Allen also seems to struggle throwing deep. Chalk that up at least in part to his poor footwork.

You can’t miss that throw. And perhaps he wouldn’t have if his feet were pointed in the right direction.

If you want to look further into him, I recommend the full New Mexico cut-up from last season. Allen starts with an IDGAF dart over a CB in good coverage that became a 75-yard catch-and-run TD. Then comes a 3-play sequence near the middle of the 1st quarter in which Allen gets away with poor feet on a throw to the right sideline, sails a ball over a hittable receiver at the opposite sideline and then delivers the awful deep ball above.

This is where you should smile about being a fantasy football GM as opposed to the real thing. If Josh Allen busts as an NFL QB and you drafted him to your real-life team, it could cost your job. In fantasy, finding insurance and/or a replacement is easy.

That makes Allen’s talent package well worth betting on -- depending on his landing spot. I see Patrick Mahomes upside. When you look at those 727 rushing yards over Allen’s 25 starts at Wyoming the past 2 years, remember that yards lost via sack are subtracted from that total. Allen logged 11 career games of 10+ carries, including 8 among 14 contests in his redshirt sophomore campaign.

Allen brings fantasy-friendly rushing upside. He brings the willingness to trust his arm on throws into tight windows (or even through non-windows). That means a combo of WTF and “NO NO NO NO YES!” plays.

Landing spots will be key in sorting out this talented crew of passers. And Allen’s outlook might be more dependent on situation than any of the other top QBs.