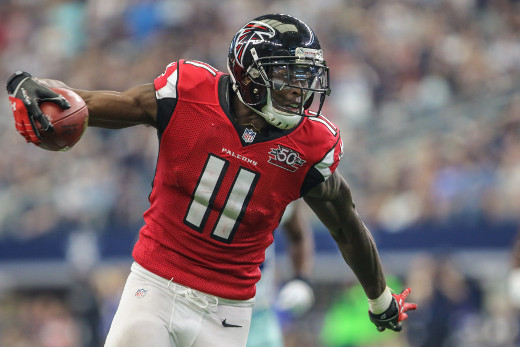 I just entered my 1st real-money league of the year: an FFPC Draft Experts. This is a best-ball league, so no lineup-setting, no waivers and no trades. Draft and you’re done.

If you’re not familiar with FFPC rules, here’s a quick rundown …

You better believe I’ll be using our rankings and the MVP Board as the backbone of my strategy. I’ll also be leaning on our prior best-ball research to help with draft decisions.

Join me for running pick-by-pick analysis throughout this 28-round draft.

Jones’ durability problems — he’s missed 17 games through 6 NFL seasons and is coming off relatively minor offseason foot surgery — are less worrisome in this best-ball format with super deep rosters. When on the field, he’s produced as a top 6 WR in PPR points per game each of the last 4 years.

The MVP Board was screaming at me to take Gurley here -- a bit surprising with Dez Bryant on the board.

Based on our projections, though, only 8.3 points separate Bryant and Demaryius Thomas, who's ranked 4 spots below him and has a good chance to be available in the 3rd round. Gurley, meanwhile, is projected for 11.4 more points than the next best available RB.

The Rams workhorse brings a comfy floor. Even in last year's uber-disappointing season, he finished 15th among RBs in this scoring format. And we've seen the upside when he ranked 2nd at his position over the final 13 weeks of the 2015 fantasy season.

I got him here as the 10th RB off the board.

Crow ranked 14th among RBs in this scoring system last year -- despite playing on a 1-15 Browns squad that finished dead last in rushing attempts.

Cleveland should take a step forward in 2017 (it'd be tough to be worse). And they upgraded the offensive line by adding G Kevin Zeitler and C J.C. Tretter.

Woke up this morning to see I'd missed Ty Montgomery, my top target here, by 1 pick. Happy Friday!

I'll settle for an upper-echelon TE instead. Graham finished 4th among TEs in this format last year. And with the 1.5 PPR, he out-scored all but 16 WRs. He could be even better in 2017 as he puts that 2015 torn patellar tendon further behind him.

Did Allen lose a limb or something?!?

There are obviously durability concerns here. And his volume figures to drop from previous levels in a loaded Chargers pass-catching corps. But I got him 19 spots after ADP and as the WR27.

Allen appears 100% recovered from last year's torn ACL and remains the odds-on favorite to be the target leader for an offense that's ranked top 10 in passing yards in 4 straight seasons.

I'm carrying the Powell flag around DS headquarters. The guy ranked 2nd in yards per carry (5.5) among 42 RBs who toted it 100+ times last year. He also ranked 3rd in yards after contact per carry and 9th in missed tackles forced per carry, according to Pro Football Focus.

Sure, the Jets will be bad this year. But they were bad last year, and Powell finished 17th among RBs in FFPC points. That came on just 189 total touches. He should zoom by 200 this season -- and has a shot to reach 250 depending on how little is left in Matt Forte's tank.

It feels like we've been waiting for an Ebron breakout forever. He's entering just his 4th season, though -- and is still only 24.

Ebron has upped his catches, catch rate, yards and yards per catch each of the past 2 seasons. He ranked 11th among TEs in FFPC points per game last year, despite scoring just 1 TD. Anquan Boldin's departure leaves behind 95 targets from a year ago, including 22 in the red zone.

Jackson has long been 1 of the most efficient WRs, ranking among the top 5 at his position in fantasy points per target in 4 straight seasons. Now he joins a Bucs offense with a young, ascending QB and an elite WR on the other side of the field to draw coverage away.

A top-25 finish is within Jackson's range of outcomes. And he should provide some spiked weeks that will play well in this best-ball format.

Durability is a concern after Prosise sustained hip, hamstring, hand and scapula injuries as a rookie. But he also flashed big upside when he was on the field, averaging 5.7 yards per carry and 12.2 yards per catch.

A healthy Prosise should dominate passing-down work in Seattle. And there's a chance he assumes a large ball-carrying role if Eddie Lacy falters again. I love the weekly and season-long ceilings I'm getting here in the 9th round.

I got swept up in a QB run, with 5 straight going before my pick here. I'm cool with Dalton as my QB1, though -- even if I was hoping to land him a round or 2 later.

Dalton sits 11th in our FFPC QB rankings, which is exactly where he finished last year. That was despite A.J. Green, Tyler Eifert and Gio Bernard missing extensive time. With better injury luck in 2017 -- plus the additions of rookies John Ross and Joe Mixon -- Dalton should once again return low-end QB1 numbers.

Four more QBs came off the board between my 10th and 11th rounders, bringing the total to 19 QBs drafted. I want to make to secure at least 1 more locked-in starter, so gimme Wentz.

The floor is low after an inefficient rookie year, but the ceiling is intriguing thanks to a revamped WR corps and plus athleticism.

Expect to see this guy on a lot of my teams this year -- especially if he continues lasting into the 12th round.

All Wallace has done since entering the league is turn in top-35 PPR finishes. (OK, he failed to reach that territory once -- in 2015 -- among his 8 NFL seasons.) That includes a WR24 finish in his Ravens debut last year.

The 2017 Ravens are missing a whopping 331 targets from last year’s squad (Dennis Pitta, Steve Smith, Kamar Aiken and Kyle Juszczyk). New arrivals Jeremy Maclin and Danny Woodhead will soak up a bunch of those. But, at bare minimum, Wallace is a strong bet to match last year's 117 targets.

Dixon is flying under the radar -- probably because of the 4-game suspension he was hit with to open the season. After that, though, this guy has a good shot to emerge as Baltimore's lead back.

Dixon actually ranked 19th among RBs in PPR points from Week 9 on last year, despite sharing the backfield with Terrance West. Dixon ran circles around his backfield mate over that stretch, averaging 4.5 yards per carry vs. West's 3.6. If that trend continues when Dixon debuts this year, he deserves a bigger workload.

14th round. Time to take a shot on a former 1st-round pick with a 6'2 frame and 86th percentile SPARQ score.

Doctson will head to camp as Washington's #3 WR but has the ability to climb the depth chart. The departures of Pierre Garcon and DeSean Jackson leave behind 214 targets from a year ago.

Owning Austin in a standard lineup-setting league is never fun. But he brings a nice weekly ceiling for best-ball formats. Austin has topped 20 PPR points 6 times over the past 2 seasons and gone over 15 points in 9 games.

While I didn't love what I saw on Jones' East Carolina tape, he certainly checks boxes for college production () and athleticism (). And he landed in a nice spot for immediate production. Jones has to beat out only the rag-tag group of Andre Holmes, Philly Brown and Rod Streater for the #2 WR job. That spot fed Robert Woods about 6 targets per game over the last 4 years.

I've spent the past few days stockpiling DSTs and Ks.

Our MFL10 study a couple of years back found that drafting 3 defenses consistently improves your team's expected point output. It makes sense: A 3rd DST is more likely to start for your best-ball team than, say, a 7th RB or an 8th WR. Same logic applies at K. And it's even easier to execute in these 28-round FFPC Draft Experts leagues (vs. 20-round MFL10s).

I also sprinkled in Richard, who averaged 5.9 yards per carry and posted a 29-194-2 line as a rookie last year. He could take on a bigger role this season if the 31-year-old Marshawn Lynch falters.

Treadwell is coming off a strong spring. He'll head to training camp as Minnesota's #3 WR -- but don't be surprised if the 2016 first-rounder passes former undrafted free agent Adam Thielen at some point this season.

Siemian has at least a 50% shot to open the season under center for a Broncos team that might throw it more this year. His competitor, Paxton Lynch, went 3 rounds earlier.

Denver shipped a 5th-round pick to New England to acquire Derby last October. He totaled 16 catches on 20 targets for 160 yards in 6 appearances for the Broncos, including 9 grabs in the final 2 games. The TE room is crowded with Virgil Green, Jeff Heuerman and rookie Jake Butt also in the mix, but Derby is my bet to lead the group in fantasy points.

He'll duke it out with Jermaine Kearse for the #3 WR job this summer. Even if he wins it, Richardson will likely need an injury to Doug Baldwin or Tyler Lockett (or Jimmy Graham) to be a fantasy factor. But what more can you expect from a 28th-round pick?