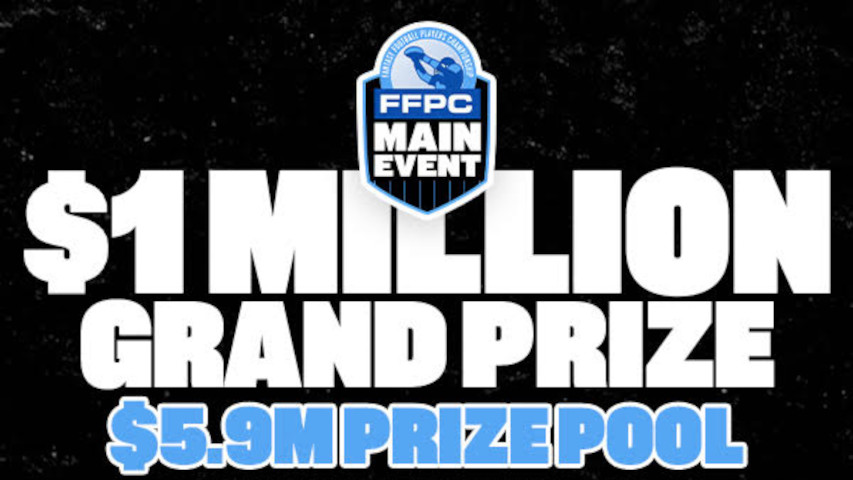 In Part 3 of the FFPC Main Event Strategy Guide, I’ll cover how to attack (or not attack) the “onesie” positions in the draft… QB and TE.

Don’t forget to check out Part 1 and Part 2.

Drafting QBs has evolved over the years. When I first started playing fantasy football in the ‘90s, QBs were always the top picks. Brett Favre and Kordell Stewart were the first 2 picks in my very first draft.

Times have changed. I have been a wait-on-QB guy for about 20 years now. It makes sense. If I only have to start one QB, then why spend a top pick on one when the scoring is pretty flat at the position, for the most part.

That all kinda changed for me in 2019 when I came in 5th place in the Main Event. I drafted Lamar Jackson in the 10th round and he scored 459 fantasy points. He outscored the next highest QB by 56 fantasy points and won league MVP. I realized that you need elite QB production, especially in the 3-week sprint, Weeks 15-17, to have a shot at winning the million.

The key is finding that elite production while not spending elite draft capital. So let's dig deeper…

Elite QBs are Cheaper than Ever

In a recent Main Event draft I did, Kyler Murray went in the 8th round as QB5. Murray is my QB1. He has massive upside through rushing or passing. He also has an incredible playoff schedule with shootouts against the Broncos and Bucs followed by a should-be blowout of the Falcons. Elite QBs falling has been happening more and more. Check out the FFPC ADP from the DS ADP Index. 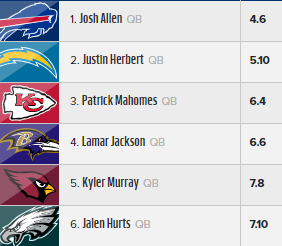 Here is a list of a few QBs I have been targeting in the mid to late rounds that can smash their ADP.

If I miss out on one of the elite ones at the right price then Lance is my guy. He made this list last year for the same reasons: elite rushing upside, elite weapons and an elite play caller. The job is Lance’s this season. Expect a breakout.

What else could Carr ask for in terms of weapons? Adams, Renfrow and Waller plus a clever play caller in new HC Josh McDaniels. The Raiders will be in shootouts all season in the AFC West.

I don't suggest punting QB, but if you do Daniel Jones should be a target with your last pick. New HC Brian Daboll brings a much more capable play caller than the hot garbage the Giants have had the last few years. The Giants also have sneaky good skill players who kill with speed in Kadarius Toney and Wan’Dale Robinson. RB Saquon Barkley will also be used heavily in the passing game. Jones also possesses some quiet rushing upside.

TE is a major strategy point in the FFPC because of the TE-premium 1.5 PPR scoring. Bully TE, Elite TE, Late TE are all in play.

In 2019 when I cashed in, I started Mike Gesicki, Zach Ertz and Dallas Goedert the final few weeks for all the money. Draft position will have a lot to do with how you are able to build your TEs. 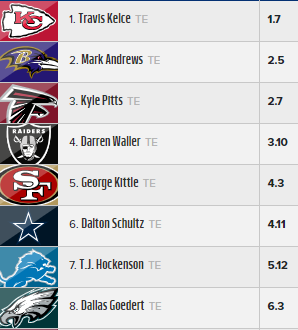 If you don't want to reach for an elite TE, you will want a pick in the back half of Round 1. Kelce, Andrews and Pitts go between the 1.7 and 2.7 in Main Events. I have taken Kelce at the 1.5 and 1.6 in some recent Mains slightly ahead of ADP because I want an elite one and I don't count on Andrews or Pitts coming back.

I did get lucky recently and started with CMC at the 1.2 and Pitts fell all the way to me at the 2.11 – but you can't count on that. If you pick in the top 5 and want an elite TE, take Kelce.

Pitts No Matter What…

I don't care what the build, I don't care who I took in Round 1, there are only 2 players I would consider in Round 2 over Kyle Pitts – and that's WR Cee Dee Lamb and RB Saquon Barkley.

Pitts has the upside to be the TE1 in this season. He finished as TE5 in 2021 as a rookie with no help around him and only scoring 1 TD. Every TE around him in the final standings scored at least 5 TDs.

There are questions about QB Marcus Mariota and I get it, but in Marriota’s rookie year he had TE Delanie Walker who finished with 94 catches for 1,088 yards and 7 TDs. The 7 TDs were the most of Walker’s career. Mariota is an experienced QB who knows that Pitts may be the most gifted TE the NFL has ever seen.

If I pass on an elite TE early, I am targeting Dallas Goedert in Round 6. His ADP is 6.03 and I have seen him fall into the early 7th. We love Goedert over here at DS. Here’s his full profile. We have been waiting for Goedert to have this role all to himself. He finished as TE8 in 2021 with only a half season in the full-time role and is now being drafted as TE6. Goedert has top-3 upside.

I have drafted Goedert WITH Pitts or Kelce in a bully TE build. I really like that in the TE- premium format and it makes the roster unique.

If I don’t get one of the options above, I am waiting till the teen rounds and attacking some late sleeper options. Evan Engram (13.3), Gerald Everett (12.12) and David Njoku (13.6) are my targets in this range.

I absolutely love Engram. He’s a former 1st-round pick who had an elite rookie season and has been under an abysmal coaching staff for years. HC Doug Peterson and his history of TEs is a major check mark for Engram in a long overdue breakout.

There are multiple ways to attack the onesie positions throughout the draft. Elite TE and Elite QB are both an option in 2022, according to the draft-friendly ADPs.

I hope this 2022 FFPC Main Event Strategy Series was helpful. Feel free to use this guide in your drafts. The FFPC is the absolute best place to play High-Stakes – and Draft Sharks is the place for league-winning content.

See ya in the draft rooms!