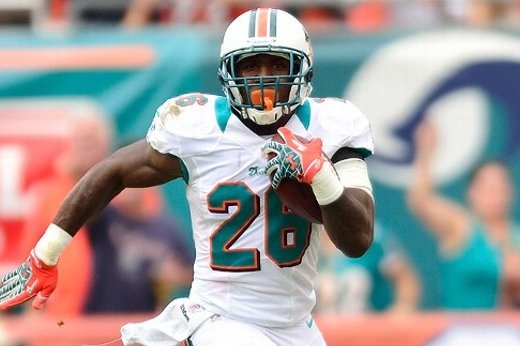 Miller is off to a good start in camp, while RB Knowshon Moreno continues to be sidelined after knee surgery. Miller is a strong bet to open the season as Miami’s early-down back. The team is reportedly hoping that he can play the “LeSean McCoy role” in OC Bill Lazor’s offense. Miller has intriguing upside as 7th or 8th-round pick.

A once-deep 49ers backfield has been thinned out by injuries to Kendall Hunter and LaMichael James. (Plus, Marcus Lattimore remains sidelined.) It leaves Hyde as the heavy favorite to win the #2 RB job behind 31-year-old Frank Gore.

Steven Jackson’s hamstring injury opens the door for Freeman to impress with 1st-team reps in training camp and preseason action. The rookie could carve out a significant change-of-pace role even with Jackson healthy.

Broncos insider Jeff Legwold told us that Hillman is solidly in place as the #2 RB at this point. That spot could earn him 6-8 touches per game, with a much larger role if Montee Ball goes down. Hillman is worth considering as a bench stash late in fantasy drafts.

The buzz continues for Cooks, who is off to a great start in training camp. It sounds like he’s already emerging as a trusted target for QB Drew Brees, which is worth a lot in fantasy football. We still worry about Cooks' game-to-game consistency as a rookie WR in a deep pass-catching corps. But he might carry enough weekly upside to be worth getting in lineups as a regular WR3.

With Cecil Shorts and Allen Robinson out with hamstring injuries, Lee is the last man standing in Jacksonville’s WR corps. He’ll get tons of action with the 1st-team offense over the next couple weeks. The rookie is a good bet to play a significant role for the Jags right from the get-go.

Gibson looks good after last year’s torn patellar tendon and is the early favorite for Miami’s #3 WR job. He was on pace for a 77-857-5 line before going down in Week 8 last season, but we're not expecting him to approach those marks in 2014. Gibson is just a low-upside bench stash.

Quick’s “production is beginning to match the raw size/speed," insider Phil Savage observed this week. Quick has been getting lots of time with the 1st-team offense in camp. If the light bulb has truly flicked on, there’s intriguing fantasy upside here. We’ll be keeping a close eye on him in preseason action.

Johnson has stood out among a weak WR corps in Cleveland. He’s a 6’3, 215-pounder with 4.38 speed. A 7th-round pick last year, he missed all of 2013 with a torn ACL. Johnson is still a long shot to make a fantasy impact this season, but he’s worth tracking – and worth rostering dynasty leagues.

Ogletree is in the lead for Detroit’s #3 WR job. Even in that role, though, he’d need a Calvin Johnson or Golden Tate injury to become a fantasy factor.

After Richard Rodgers shined in the spring, it’s been Bostick creating the most buzz among Packers TEs in training camp. He’s been getting plenty of run with the 1st-team offense and drew praise from GM Ted Thompson this week. The starting job in Green Bay remains wide open, but the winner will be an intriguing TE2 in fantasy.

Sudfeld has reportedly been the best TE in Jets camp so far and is receiving 1st-team reps. Of course, he was a hot name in New England last summer before being cut after 3 catch-less games. Sudfeld remains a long shot to emerge as a fantasy factor this season, but he’s worth monitoring over the next few weeks.

Jackson suffered a hamstring injury in practice this week that is expected to sideline him until the start of the regular season. It’s an ominous start for a 31-year-old RB with 2,552 career carries. Steve Jax is certainly a risky fantasy pick, but he’s also capable of delivering value at his 9th-round ADP.

Moreno remains sidelined after June’s knee surgery and is losing ground to Lamar Miller. Look for Moreno to open the season as Miami’s passing-down back – assuming he’s healthy by then.

Wilson suffered a neck “stinger” in practice this week. According to NJ.com, the setback has his career on the ropes. Wilson will be evaluated on Monday, so we should learn more then. If you’re drafting this weekend, avoid him.

Anderson is behind Ronnie Hillman on the depth chart and is reportedly fighting just for the #3 RB job. He’s not worth drafting unless we hear about him making a run at Hillman.

Hunter is done for the season after suffering a torn ACL in practice. He’ll hit the free-agent market in 2015.

Gaffney went down with a torn lateral meniscus this week. When the Panthers tried to get him on IR, the Patriots swooped in and grabbed the rookie. He still won’t play this season, though.

Shorts will miss “several weeks” with a hamstring strain. He also missed time this spring with a bum hammy and has had trouble staying healthy throughout his 3-year career. Shorts should be fine for Week 1 but can’t be trusted as more than a WR4 in fantasy.

Dobson continues to be sidelined by his foot. We learned this week that his March surgery placed a permanent screw in his foot. He didn’t even resume running until July and has no timetable for a return to practice. Dobson is well behind the 8-ball after missing all this practice time.

Tests on Beckham’s troublesome hamstring came back negative this week, but he’s remained sidelined. He obviously won’t play in Sunday night’s preseason opener. Beckham can’t even be considered a lock to open the season as New York’s #3 WR at this point.

Robinson will be out "an extended period of time, at least two weeks," with a hamstring injury suffered on Thursday, according to the team. That’s valuable reps the rookie will miss and kills any chance he had at being an early-season fantasy factor. Ignore Robinson in your redraft leagues.

The 1st week of training camp has been a disaster for Amaro, who’s struggled with drops and learning the offense. Amaro certainly won't be an early-season fantasy option and might not be an asset all year.