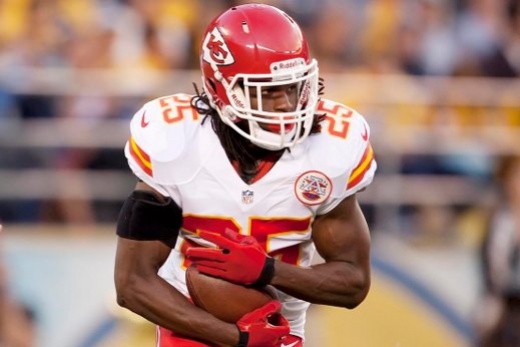 No player has been more impressive than Brandon Weeden this preseason.   He’s completed 72% of his throws, averaged 9.2 yards per attempt and tossed 3 TDs vs. 0 INTs through 2 exhibitions.  He looks extremely comfortable and is slinging the ball with confidence.  Talent has never been an issue for the former 1st-rounder.  Now it looks like he's found a fit in HC Rob Chudzinski and OC Norv Turner's offense.  Weeden is an intriguing backup option for your fantasy squad.

Vick continues to separate from Nick Foles.  And he continues to move up our rankings.  He's still not a good bet to last 16 games but will have QB1 upside whenever he's on the field.

Unfortunately for football fans everywhere, it’s starting to look like Sanchez will be the Jets’ Week 1 starter.  He was better than Geno Smith in the preseason opener.  And the rookie has been hobbled by an ankle injury.  We still expect Smith to take over at some point this season, though.  Neither guy is a fantasy option.

Morris worked on his pass-catching and blocking this offseason.  HC Mike Shanahan has noticed and is expected to use Morris more on passing downs this year.  Morris finished with just 11 receptions last season but should increase his receiving production in 2013.  That will only help his week-to-week consistency.

Lacy is being talked up by Packers coaches and the Green Bay media.  He’ll be the team’s feature back this season and carries top 20 fantasy upside.

With Jamaal Charles’ foot injury, Davis is on the radar as a late-round flier.  The rookie has already risen to #2 on the Chiefs’ depth chart.  He led the SEC in rushing in 2010, so there’s obviously talent here.  Davis would be a viable fantasy starter if Charles misses time this year.

HC Chuck Pagano says Hilton is playing faster because he's more comfortable in the offense.  It certainly showed in the preseason opener, when Hilton hauled in 3 balls for 61 yards and a score.  It’s only a matter of time before Hilton passes Darrius Heyward-Bey for the #2 spot on Indy’s depth chart.  The speedy 2nd-year wideout has huge weekly upside.

Givens has had an impressive camp, displaying improved versatility and route-running.  He finished with 3 catches for 82 yards and a TD in limited action in the preseason opener.  Givens could lead this Rams team in receiving this season.

These could be San Diego’s Week 1 starting WRs.  The Chargers already lost Danario Alexander for the year.  Malcom Floyd is now iffy for Week 1 after injuring his knee this week.  Brown has a chance to emerge as the team’s #1 WR this year.  QB Philip Rivers talked him up earlier this week, saying Brown is “everything you’d want in a WR.”  He carries WR3 upside.  Allen is still struggling with knee problems but could capture a starting gig if he can stay healthy.

The undrafted rookie played ahead of the more-heralded Aaron Dobson for the 2nd straight preseason game on Friday night.  Thompkins looks like the favorite to open the season as New England’s #2 WR.  He’s a potential bye-week option for your fantasy squad.

The rookie missed some time with a concussion but has already passed up Dwayne Harris for Dallas’ #3 WR spot.  Williams would become an intriguing WR3 for your fantasy team if Dez Bryant or Miles Austin goes down.

Collie is off to an impressive start with the ‘Niners.  With A.J. Jenkins continuing to disappoint, Collie could emerge as the #2 WR.

Everyone who attends Rams camp comes away impressed with Cook.  Sports Illustrated’s Peter King called Cook the best offensive weapon he’s seen on his camp tour.  The Rams seem ready to make the TE a big part of their passing game, giving Cook top 8 fantasy upside.  With an ADP in the 9th round, he’s a good reason to wait on TE in your draft.

We might be a bit late to the Cameron party, but we’ve officially arrived.  Cameron has always had plenty of raw talent.  And he’s in a TE-friendly offense.  We wondered if he’d be able to turn that opportunity into production, though.  It looks like he will.  Cameron looked like a beast in Thursday’s preseason game, hauling in 3 balls for 42 yards and 2 TDs.  Consider him an upside TE2.

Fleener has already been talked up by the Colts coaching staff this offseason.  This past week, GM Ryan Grigson singled out Fleener as the most likely player to break out in 2013.  TE Dwayne Allen’s foot injury only helps Fleener’s cause.

QB Peyton Manning says Thomas will be a “big part” of the offense this season.  That might be a stretch considering Denver’s loaded pass-catching corps.  But Thomas could lead Broncos TEs in receiving.  He’s worth considering late in Draft Masters drafts.

The rookie is locked in as Miami’s starter after Dan Carpenter was released this week.  But Sturgis isn’t a recommended fantasy option on Miami's still-unproven offense.

Smith was out-played by Mark Sanchez in the preseason opener.  And the ankle injury he suffered in that game has hurt his chances of winning the Week 1 starting gig.  The rookie still figures to move into the lineup at some point this season, but he’s not worth a pick in your redraft leagues.

Charles suffered a foot injury early in the week.  It’s been deemed minor, but he’s expected to be held out the rest of the preseason.  You should at least be a bit worried about Charles at this point.  Worried enough to take guys such as LeSean McCoy, C.J. Spiller and Ray Rice – safer options with similar upside – over Charles.

Franklin has been lapped by fellow rookie Eddie Lacy.  He’s struggled with pass protection and managed just 14 yards on 6 carries in the preseason opener.  The Milwaukee Journal-Sentinel doesn’t even believe Franklin is guaranteed a spot on Green Bay’s game day roster.  We still think he’ll emerge as a change-of-pace behind Lacy, but Franklin is just a bench stash in fantasy.

Williams remains sidelined after undergoing a platelet-rich plasma injection in his troublesome knee.  He’s not even a lock to make the 53-man roster at this point.

Lewis broke his left fibula in Thursday night's preseason game.  He’s likely done for the year.  Tough break for a guy who had taken over as Cleveland’s #2 RB.

Floyd avoided what originally sounded like a season-ending injury but is still iffy for Week 1 with a sprained knee.  He won't be a fantasy option until he shows he's healthy.  And it’s possible he’ll be passed up by youngsters Vincent Brown and Keenan Allen.

The news isn’t getting any better for Holmes.  This week brought a report that some Jets sources believe he’s milking his foot injury.  Holmes said that he’s still considered “week-to-week” and still can’t run.  We’re betting he opens the season on the PUP list, costing him the first 6 games.

Thompson missed the team's 2nd preseason game after spraining his foot in the 1st.  It’s not believed to be a serious injury, but the missed time will hurt a guy pushing for playing time.  He's just a late-round roll of the dice in deep fantasy drafts.

Williams has been passed on the depth chart by the more-talented Terrance Williams.  As Dallas’ #4 WR, Harris isn’t a fantasy option.

Jenkins was cut after being outplayed by the Patriots’ young WRs.

Dickson won't guarantee that he'll be ready for Week 1 after going down with a slight hamstring tear a little over a week ago.  The Ravens also added TE Dallas Clark this week.  Dickson is just a backup option for your fantasy squad.

Allen is out a couple weeks with a foot injury.  The Colts expect him to be ready for Week 1, but Allen figures to be behind in the new offense.

Casey has been the #3 TE in Philly’s first 2 preseason games – behind both Brent Celek and Zach Ertz.  Casey isn’t a fantasy option.

Carpenter was released by the Dolphins this week.