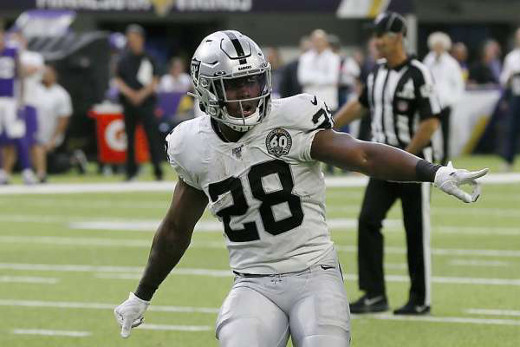 I hate paying up at QB, but I’ll make an exception for Jackson. His floor/ceiling combo can’t be matched — we’ve seen him reach 28 FD points in 3 of his last 4. Houston’s allowed the 6th most fantasy points to QBs this year, while the Ravens are implied for the 3rd most points on the week (27.75).

Ultimately, it’s highly unlikely Jackson hurts you in this spot.

Winston’s reached 40 pass attempts in 5 of his past 6 outings. I think he makes it 6 out of 7 with the Saints — fresh off a shocking loss — coming to town.

New Orleans defends the run well, ranking 7th in Football Outsiders’ run DVOA. But the pass D will be down top CB Marshon Lattimore due to a hamstring injury. Winston's easily stackable with either Mike Evans or Chris Godwin, with the latter being my preferred target.

It’s strange to see Jacobs’ price next to Zeke Elliott’s, but this matchup really warrants it. The Bengals have surrendered a TD and/or 100 total yards to a lead back in each game this season.

The Raiders have committed to the run — and Jacobs — affording 21 and 30 opportunities over the past 2 games.

Devonta Freeman and Ito Smith are out, forcing Hill into a major role. Last week in relief, he rolled up 20 carries and 2 targets in a blowout win.

The Panthers have given up a league-high 14 rushing TDs to enemy RBs. On the year, Carolina also sits dead last in Football Outsiders’ run DVOA.

Fournette returns from a bye bound for some positive TD regression. He’s scored just once on the year despite 174 carries; 40 catches. He’s even added 32 red zone rushes — T-4th most league-wide.

This 2nd-year Panther should be at least $800 more. He’s racked up 8+ targets in 5 straight, producing a per-game yardage average of 84.6. Kyle Allen’s competent play will continue to raise the projectable floor. And a matchup with Atlanta could unlock the upside.

Brown is one of only 2 WRs with 50+ yards in each game. He’s scored just twice all year, but you like the big-play upside against Miami’s spare-parts defense. Only 5 teams have allowed more completions of 20+ yards, while only 3 have surrendered more WR TDs.

McLaurin’s predictably struggled of late. Facing San Francisco, Minnesota and Buffalo, the rookie owns 9 catches for 89 yards. He gets a breather this week against a Jets pass D that’s allowed the 2nd most fantasy points per game to WRs over the past 5 weeks.

There’s clearly a lot to like about this matchup, one with a game total of 50 points. The Saints are coming off a 9-point dud vs. Atlanta, but prior to that one, this unit averaged nearly 25 points per game.

Cook returned from injury last week to post 6-74 on 10 targets. No other Saints TE ran a route in the Atlanta game. In a week that looks thin at TE, Cook’s a solid option across formats.