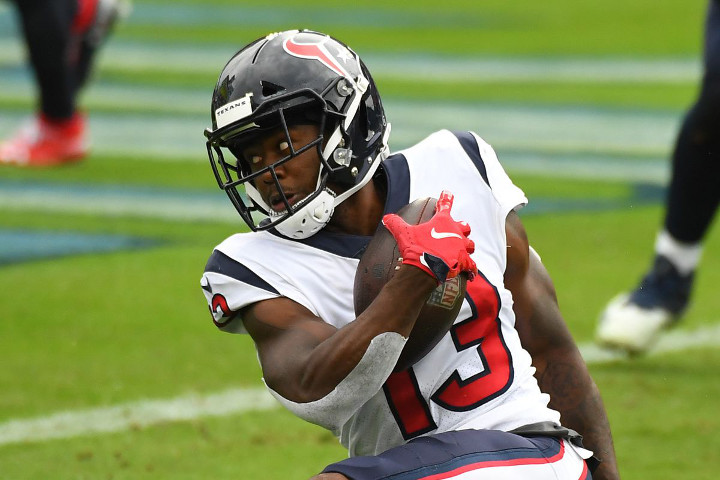 Week 13 doesn’t turn up an obvious cash game QB. So there’s merit to paying down and going with the guy listed below — Turbisky — against a thin Detroit secondary.

On the higher end, I’m looking to a $7.7K Taysom Hill. He’s popped in a pair of rushing scores in back to back weeks, effectively acting as a goal line back. He isn’t being asked to do much as a passer, but he just carved up this defense in Week 11 to the tune of 233 yards on 18-of-23 passing.

Ekeler returned last week and handled 14 of 22 RB carries; 16 of 17 RB targets. Clearly, his hamstring is fine. Ekeler’s not even listed on the Week 13 injury report.

Josh Jacobs will miss Sunday’s action against the Jets. With Jacobs active, Booker was already working his way into 6-8 weekly touches. Now, I expect that number to hover around 15.

With the Raiders implied for 27 points, Booker looks like a decent TD bet.

Despite a massive salary, Adams sits a clear #1 in our $/point rankings. He’s scored in 6 straight and draws a Philadelphia secondary that’s dealing with a banged up Darius Slay (calf).

Adams should deliver once again.

As of Friday night, it sounds like there’s a decent chance Ryan Fitzpatrick will make another start. That’s a positive for Parker, who’s caught 4+ balls in 6 of 8 starts alongside Fitz.

That stretch includes last week’s 14-target, 119-yard outing last week against the Jets. With Miami’s backfield as banged up as it’s been all year, it’s easy to see the passing game being featured against a bad Cincy pass D.

Cooks will likely wind up as the highest owned WR of the slate. Will Fuller, Kenny Stills and Randall Cobb are out.

Cooks, meanwhile, should run a good chunk of his routes against struggling CB Rock Ya-Sin, who had his snaps scaled back last week against the Titans.

At bottom, Cooks is just underpriced for his clear-cut #1 role in a game played indoors. Plug him in and move along.

Zach Ertz will return this week, but HC Doug Pederson said the team will “have to be smart” about his usage given his extended layoff. I think Ertz mostly takes from Richard Rodgers, especially with how well Goedert’s played.

He’s scored in back-to-back weeks, a stretch that’s included a pair of 75+ yard outings. The Eagles enter Sunday as 9-point road underdogs, so pass volume looks likely to surface against the high-scoring Packers.

Note: Green Bay’s allowed the 3rd fewest catches to enemy TEs, but they’ve faced a very light schedule. Still, Darren Waller’s only $800 more, so if you have the funds, he’s certianly in play against the Jets.