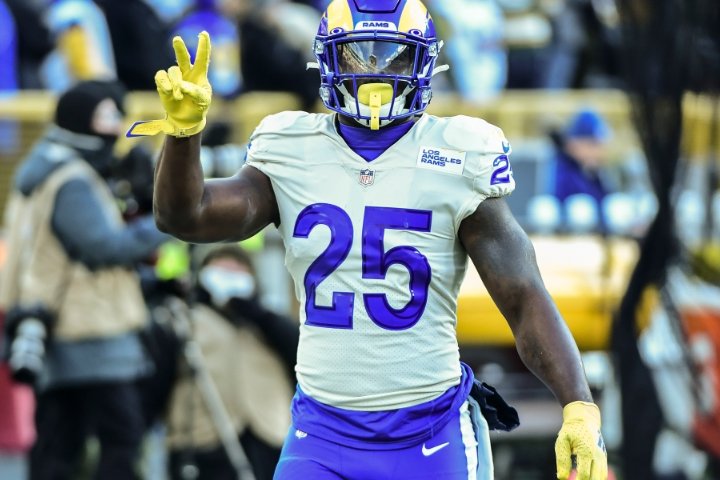 Hill showed exactly why he’s such a valuable fantasy QB in Thursday night’s loss to the Cowboys. He wasn’t good as a passer, finishing with 264 yards, 2 TDs and 4 INTs. But he ran 11 times for 101 yards and will finish the week as a top 10 fantasy QB. Hill injured a finger on his throwing hand in the Dallas game that he’ll try to play through, which adds even more risk to his passing projection. But as long as he can run, he’ll be a good bet for QB1 production. And Week 14 brings a dream matchup vs. the Jets.

It’s tough to believe, but Michel entered Sunday at only 35% owned in ESPN leagues. He showed why he’s a top-tier handcuff by rushing 24 times for 121 yards and 1 score against Jacksonville. He had several other goal-line scoring chances, but fantasy owners can’t complain about this outing. HC Sean McVay said after the win that although Darrell Henderson (quad) could have played, the team decided to give him extra rest in a blowout win. Even if Henderson returns next week, Michel belongs on fantasy rosters everywhere. His performance is a good reminder to consider adding handcuff-type RBs for the stretch run.

Howard missed Sunday's game with his knee injury; Scott was active but played just 3 snaps after missing practice all week with an illness. But both guys are worth stashing if you have room after RB Miles Sanders aggravated his right ankle sprain in the win over the Jets. Philly has a Week 14 bye but returns with 2 neutral matchups vs. Washington sandwiching a plus draw against the Giants.

Gage drew 5 more targets than any other Falcon in Sunday’s loss to the Buccaneers, garnering 29% of Matt Ryan’s attempts. He turned those 12 targets into 11 catches for 130 yards. It was his 3rd consecutive game with at least 7 targets and 5 catches; his 4th such game among the past 5 contests.

Parker returned from his hamstring injury Sunday to catch all 5 targets for 62 yards. He’s now averaging 8 targets, 5 catches and 64.8 yards across 6 games this season. Parker and the Dolphins have a Week 14 bye, but there are positive matchups the following 3 weeks vs. the Jets, Saints and Titans.

Osborn drew 7 targets Sunday against the Lions, with WR Adam Thielen missing most of the game. We learned Sunday night that it's a high-ankle sprain for Thielen, so we can expect him to miss at least Thursday night's home date with the Steelers. That puts Osborn into fantasy-lineup consideration against a Steelers D that entered Sunday ranked just 26th in pass-defense DVOA by Football Outsiders.

WR Adam Thielen’s absence likely pushed Conklin into a bigger role Sunday. He finished 2nd behind only WR Justin Jefferson with 9 targets, 7 catches and 56 yards. Thielen seems unlikely to be ready for Thursday night’s game vs. the Steelers -- and will likely miss more than that with his high-ankle sprain. Conklin will carry target-volume upside for at least as long as Thielen is out.

RSJ turned in limited practices all week before showing up inactive on Sunday. That suggests he's nearly ready to return from his hip injury. Washington could sure use him next Sunday against Dallas, now that Logan Thomas is done for the season. In 4 full games with Thomas out previously, Seals-Jones averaged 6.5 targets, 4.3 catches and 40.5 yards per contest.