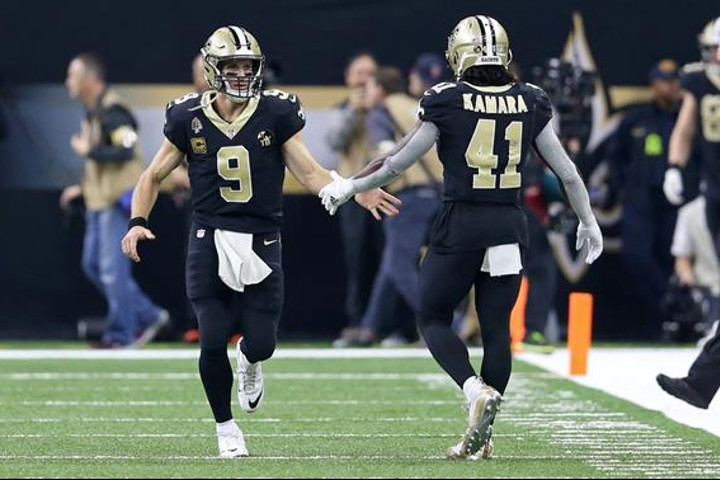 This is an expensive but viable stack this week as I expect the Chiefs to employ a pass-heavy game plan against a strong Saints rushing defense.

The Saints defense is top 5 in sack rate and has permitted the league’s 4th fewest points to opposing QBs, which should lower Mahomes’ ownership as the most expensive QB on both sites.

Hill plus Mahomes has the highest ceiling among any QB/WR duo as Hill has been heavily targeted and gets a matchup with Marshon Lattimore, who has allowed the 2nd most 20+ receptions in the league.

Hill has an absurd 65 targets in his last 5 games, rendering him an impossible fade in a dome game environment that should only enhance his elite speed. Perhaps Mahomes and Hill replicate their game against the Bucs, when Mahomes had over 300+ yards at the half and Hill had a 200+ yard 1st quarter.

Thomas is the perfect bring back option in this game. He gets a projected volume boost with Drew Brees back in the lineup and the Saints expected to throw the ball more.

Thomas is probably better a play on DraftKings as he has had 2 games of 100+ yards in last 4 but has struggled to find the end zone this season.

Brees is priced as QB11 on DraftKings and QB10 on FanDuel, making him an excellent play in a great matchup at home against the Chiefs. Brees has been efficient this season and has long had better numbers at home in the Superdome.

The matchup is a good one as the Chiefs have allowed top 8 finishes to 4 of the 5 past QBs they have faced, including Tua Tagovailoa and Derek Carr.

Kamara’s price has decreased on both sites as he was targeted just 6 times in Taysom’s first 3 starts but 10 times in a negative game script last week against the Eagles. Kamara is probably my favorite play on the slate with Brees back in the lineup as Kamara has had 8+ targets in 7 of 9 games with Brees as the starting QB.

Priced as the RB3 on both sites in a great matchup, Kamara will be a lock button play for me this week, especially on DK.

Kamara has still scored a TD in 3 of his past 4. And if his target projection is back in the 6-10 range, he is an exceptional value on both sites.

I have been getting exposure to Kelce every week as he continues to be in tournament winning lineups. He’s leading the league in receiving yards and absolutely dominating every other TE in the league.

Kelce has gone over 100+ yards in 5 of his 6 past games and can easily double up every other TE on the Week 15 slate with no Darren Waller or George Kittle.

Trubisky has given the Bears offense a pretty good spark the last 3 weeks with 3+ TDs and 20+ fantasy points in 2 of 3 starts.

Trubisky has been the QB9 overall since replacing Nick Foles and now gets another un-imposing matchup against the Vikings, who have allowed the 5th most passing TDs in the league.

Robinson is the most obvious stacking option to use with Mitch as he has more than double the targets of any other Bears pass catcher with Trubisky at QB.

Robinson has a minimum of 73 yards receiving with Mitch as his QB in their last 3 games and has scored 3 TDs during that span.

The matchup for Robinson is excellent as the Vikings have permitted the league’s 3rd most fantasy points to opposing WRs.

I like Thielen just a bit more than teammate Justin Jefferson as Thielen is a slightly cheaper option and has scored more TDs this season.

Thielen had scored 5 TDs in his past 3 games before putting up a dud last week against the Bucs with just 3-39-0.

It should be a nice bounce-back spot for Thielen as he scored 2 TDs against this same team just a month ago in the Vikings’ Monday Night Football win over the Bears.

DFS players find a reason to fade Henry every week, especially on DK where they claim Henry doesn’t have a high floor since he doesn’t catch passes.

I just don’t care if Henry doesn’t get targets because he is once again leading the league in rushing yards and the Titans are going to continue to ride him into the playoffs.

Henry had 26 carries for 200+ yards and 2 scores last week against the Jaguars and now gets a home matchup against the Lions, who have surrendered the most fantasy points to opposing RBs.

Henry needs to average 156 yards over his last 3 games to surpass 2,000 rushing, so if he rips off another 200-yard game it will certainly be in reach.

Further enhancing Henry’s projection is the fact that the Lions may be without their top 2 offensive players in Matthew Stafford and Kenny Golladay.

If Chase Daniel is starting, I will be using a good bit of Titans defense, especially in lineups where I am using Mr. Henry.

The Titans defense has had problems getting pressure all season. But as double digit favorites they should be able to tee off on Daniel a few times and force a couple of turnovers.

Tennessee hasn’t been a good defense all season, but they do have 8+ fantasy points in 2 of their past 3 and make for a good correlation play with RB Derrick Henry in a projected route.