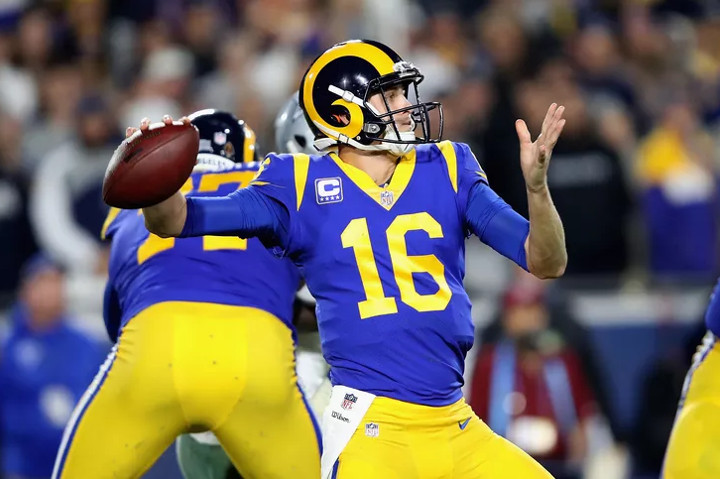 Goff is coming off of 2 subpar games against the Jets and Patriots and has been a boom/bust player this year. He should come in low-owned even with a matchup against the Seahawks, who have improved but have still given up the 5th most fantasy points to opposing QBs.

Goff played well against the Seahawks last month but was unlucky with TD variance as he eclipsed 300+ yards passing but didn’t have a TD pass.

This divisional showdown is a huge game to see who will take down the NFC West — and I think Robert Woods and Cooper Kupp should be able to get going against one of the league’s worst secondaries.

I’ll be using Goff in at least 20% of my GPP lineups and stacking him up with mostly Cooper Kupp and then some Robert Woods.

I’m going to play the chalk here with Ekeler, who’s weirdly priced at $7K as the RB10 on FanDuel compared to the RB4 on DraftKings this week.

Ekeler is the top ranked RB in our dollars-per-point rankings, coming off a slow game against the Raiders where he had just 60 rushing and 19 receiving yards.

Ekeler is off the injury report this week and had a long week to rest his quad issue. With Anthony Lynn coaching to save his job, I’d expect the Chargers to be playing 100% down the stretch.

Ekeler has handled 20+ touches in 2 of his past 4 games and eclipsed 18 FD points in both of them. I expect that to be the case here going up against a dead Denver team that looked demoralized last week, giving up almost 50 points to the Bills.

I’ll be using Ekeler in at least 40% of my GPP lineups.

With Mark Ingram inactive last week, Dobbins led the Ravens backfield against the Jags with 15 touches compared to 11 for Gus Edwards.

The Giants have given up the 9th most fantasy points to opposing RBs. I’ll be looking to use Dobbins in at least 25% of my lineups.

Robinson should have his way against a Jaguars secondary that is basically all backups and that will probably be trying to lose since they now currently have the #1 overall pick instead of the Jets.

Robinson is ranked 2nd in the Draft Sharks model and has been extremely productive with Mitchell Trubisky at QB with 74+ yards in 4 straight games and 3 TDs during that span.

Weirdly, Robinson was only targeted 5 times last week but still got 83 yards on just 4 receptions. He had 33 targets in his previous 3 games and should see close to double-digits once again against a putrid Jaguars secondary.

I’ll be looking to use Robinson in at least 25% of my GPP lineups as he should be able to exploit the soft matchup and finish as a top 5 WR this week.

Brown has finally come to life the past month with at least 98 yards or a TD in 4 straight games. His price hasn’t come up much at all on FanDuel.

He has 4 straight games with double-digit fantasy points but still hasn’t had a ceiling week with no games with multiple TDs.

It could come this week against the Giants as Lamar Jackson has been terrific the past few weeks and is finally starting to click with Hollywood.

The Ravens are in a must win situation as they continue their push to make the playoffs, and I think they’ll have no problem hanging 30+ on the ailing Giants.

I’ll be using Brown in at least 25% of my GPP lineups.

I don’t like any of the cheap options at TE this week, so I’m opting to pay up for Kelce.

I gave out some value plays at RB and WR, so we should be able to comfortably fit Kelce, who has a phenomenal chance at being the top TE on the slate against the Falcons.

Kelce has had one of the best seasons by a TE of all time, scoring 10 TDs and eclipsing 100 yards 6 times. He has 8+ receptions in 7 straight games. Now he gets a Falcons defense that has given up the 5th most fantasy points to opposing TEs.

The Chiefs can lock up the 1 seed with a win this week, so they should be all systems go against a terrible defense.

Defense has been unpredictable all season, so I’m going to pay down for the Bengals in a good portion of my lineups to save some money and pay up at other positions.

The Bengals haven’t generated much pressure this season — but going up against Deshaun Watson and the Texans, they should be able to eke out a few sacks and maybe they will get lucky with a TD.

As the 3rd least expensive defense on the FD slate, we won’t need much from them to exceed value. I’ll be looking to use them in at least 20% of my lineups.