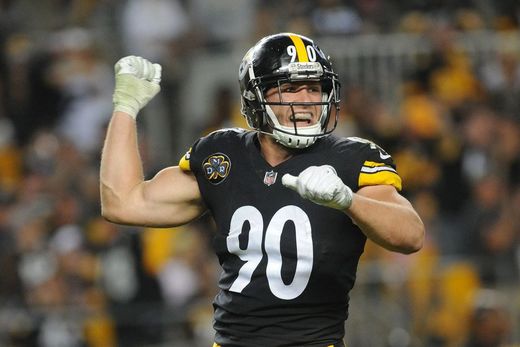 Do not go out and grab all the guys listed below.

Overreacting is the easy way to go in Week 1. After months of dreaming about the season, looking back on last season's results and projecting what's about to come, we have finally gotten a look at real football. Some of what we've seen has seemed to confirm what we expected. Other things were Ryan Fitzpatrick.

But no matter what you or I saw in Week 1, it was just 1 game's worth of reality for each team and each player. We undoubtedly witnessed the start of some trends. But we also saw some mirages.

The players in this article are split up by position and ranked pretty much in order of IDP relevance. Use this article each week in conjunction with our Rest of the Way rankings (coming this week) to determine whom you should grab.

Hitchens likely got drafted in just about any IDP league of decent depth this summer. But perhaps he should be owned in any league that plays 2+ defensive guys. Never a full-time player through 4 seasons with the Cowboys, Hitchens racked up 15 tackles (7 solo, 2 for loss) in his regular-season debut as a Chiefs full-timer.

Unlike Warner, Vigil did find himself in draft range in our preseason rankings. But he’s likely still available on many waiver wires. Count on that changing after he racked up 11 solo tackles -- including 2 for loss -- in Sunday’s victory at Indy. Pro Football Focus graded Vigil among the league’s poorest LBs last year, but he was a top-25 fantasy scorer before landing on IR.

There was lots of talk about who would start in the middle for the Colts, after undrafted rookie Skai Moore spent the preseason filling in for expected starter Anthony Walker. But Leonard is the surest thing in this reshaped LB corps. The high 2nd-round pick got things started with 9 tackles (6 solo) in Sunday’s loss to Cincinnati. Leonard not only racked up 238 tackles over his final 2 college seasons, he delivered across categories over 4 starting seasons at South Carolina State -- including 12+ tackles for loss every year.

Another LB who should have been drafted, Woodyard opened his season with 12 tackles (7 solo) in Sunday’s delayed marathon loss to Miami. Next comes Houston, which presented a top-12 scoring matchup for fantasy LBs last year and allowed 9 tackles to Woodyard in each meeting.

Watt delivered about 34% of his fantasy production last season in 2 meetings with the Browns. So it didn’t surprise us that he played well against them Sunday. But HOW well he played raises his waiver priority: 11 tackles (8 solo), 4 sacks and a blocked kick. At the least, Watt will be a strong matchup play going forward. In a defense with plenty of question marks at LB, he could just lead Pittsburgh’s LB scoring all year.

We didn’t have Warner projected into preseason draft range, but we did have him among the top-15 LBs for Week 1. That’s because the rookie is starting in place of suspended Reuben Foster, and he’ll do so for 1 more week. Warner racked up 11 solo tackles, 1 assist, a pass breakup and a forced fumble in his regular-season debut at Minnesota. Pick up Warner this week, and you’ll at least get him for a Week 2 trip to Detroit. There’s a potential bonus, though: Warner could play his way into taking Malcolm Smith’s spot after Foster returns to reclaim the middle.

Thompson is finally getting starter-level snaps with Thomas Davis suspended for the 1st 4 weeks. That produced 9 tackles (5 solo) and a sack in Sunday’s win over the Cowboys. Week 2 brings an Atlanta offense that hasn’t been a super matchup for LB scoring but that runs and throws to RBs a fair amount. Playing host to the Bengals could present a favorable matchup with the Bengals. Then comes a Week 4 bye during which we can decide whether to dump Thompson before Davis’ final suspension week.

Geathers missed offseason workouts and remained out into training camp while working back from knee surgery. But he has returned to reclaim the starting job at SS, next to Malik Hooker. Geathers collected 7 solo tackles and forced a fumble in Sunday’s loss to the Bengals, who supplied just 48 total tackles to all Colts (17 fewer than Cincinnati’s defense registered). Geathers’ tackle totals figure to benefit from a questionable front 7 and weak CBs for as long as he can stay healthy.

The 2 forced fumbles against New England were quite nice for anyone who happened to use Jackson in Week 1. But we’re more interested in the 8 solo tackles. Jackson has made the transition to safety after 8 years in the league at corner. He plays next to stellar coverage S Tyrann Mathieu and behind a LB corps that saw both main inside guys post somewhat modest tackle rates (percentage of team total) last year. There’s a chance Jackson continues to be a key tackle collector for Houston. And if he gets Blaine Gabbert starting at QB for the Titans in Week 2, then throw in some extra turnover upside as well.

Injured starters are coming back, depth charts are falling into place. Here's what it all means for your IDP lineup ...

Disappointed that Khalil Mack is still a LB in your IDP fantasy football league? Here's why you should still draft him ...

The 15 most important IDP training camp battles in fantasy football.