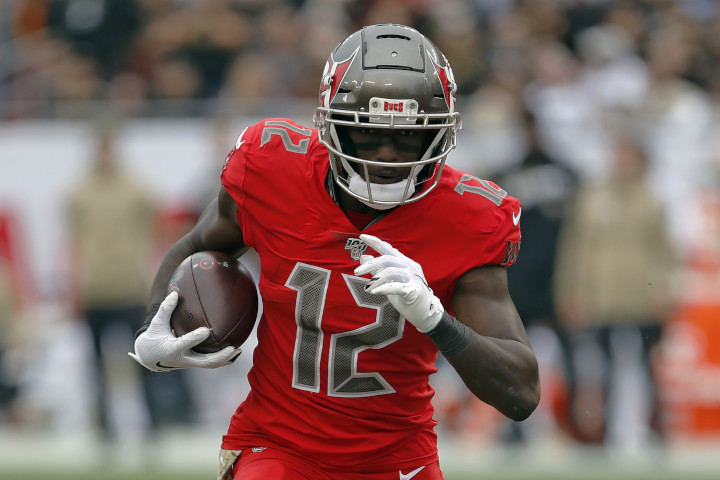 We’re missing a lot of the high-scoring offenses on the main slate this week (Bills, Chiefs, Ravens, Seahawks and Rams).So game selection will be a major key to success.

This is a prime week to pay down at QB and spend up elsewhere, so I’d suggest building out other positions first.

That said, if you have the salary to pay up …

Kyler is at home against the 49ers defense that is currently allowing the 6th most adjusted fantasy points to the QB position. Kyler is also coming off a disappointing week, which may suppress his ownership.

Tannehill is too risky for cash games, but he presents a massive leverage opportunity in tournaments. Not only is he a great pivot away from Derrick Henry, but some of the highest projected ownership QBs also settle right near his price range (Cousins, Prescott, Daniel Jones).

Tannehill will get A.J. Brown back for this game, and the Jags are currently allowing the 10th most fantasy points to opposing QBs. If Tannehill hits, it eliminates a huge percentage of the competition who played Derrick Henry and these other QBs.

With many of the high-powered offenses off the main slate, the Packers vs. Bengals game currently boasts the 2nd highest over/under at 50.5. The Packers’ defense is currently allowing the 16th most fantasy points to QBs and the 11th most adjusted fantasy points.

Joe Mixon being doubtful for this game should push the Bengals towards passing the ball.And injuries to star Packers defenders Jaire Alexander and Zadarius Smith make this defense a prime victim for a Joe Burrow explosion game.

One of the big decision points of the week: to Big Dog or not to Big Dog?

I’m choosing to eat the chalk in tournaments this week. Derrick Henry averages 133 rushing yards and 1.5 rushing TDs against the Jaguars since 2018. An 0-4 team going through a coaching controversy WILL NOT want to tackle Derrick Henry. Additionally, the Jaguars are allowing +32.5% adjusted fantasy points to the RB position.

I love these 2 RBs this week.We’ve seen both players get back to their old selves from a talent standpoint, and this game allows for a lot of RB production. Both teams are susceptible to the run, ranking 26th (NYG) and 19th (DAL) in rush defense DVOA.

Every major receiver is expected to see shadow coverage in this matchup (per PFF):

This could be a game where the RBs carry the load, and it provides a leverage opportunity against two of the highest owned passing games on the slate.

When Dan Campbell said “you’re going to see a lot more D’Andre Swift” last week, he wasn’t lying. Swift played a season and career-high 73% of snaps and ran 71% of the routes. He’s also out-targeted Jamaal Williams 18-5 over the last 3 games.

In a game where the Vikings could cruise on offense, it presents a lot of opportunities for the Lions to play catchup and Swift to rack up the receptions.

Another big decision on this week's slate is whether to spend up at WR. I was burned last week spending up on Davante Adams ($8,200), but I’m okay going back to him if you have the budget for it.

Mike Evans and Antonio Brown will have their hands full with Xavien Howard and Byron Jones on the outside for Miami, which leaves Godwin to take advantage of Justin Coleman in the slot. This Buccaneers receiver core is always matchup-based, and Godwin has a decisive advantage over the other two in this matchup.

Pick your poison here.As discussed above, this game has the 2nd highest over/under on the slate at 50.5, and the Packers stud corner Jaire Alexander is out. The Packers defense has allowed 17.8% fantasy points over expectation to WRs this season (8th highest). And that was with Alexander healthy.

I built a stack with Burrow, Higgins and Boyd to differentiate from the more popular stacks with Chase who has the most difficult matchup (Eric Stokes) of the three WRs.

Coming off a down week, it will distract a lot of DFS players from Marvin Jones being the clear alpha in this offense. He had 28 targets over the first 3 games — and now DJ Chark is out.

The Titans are giving away fantasy points to the WR position, allowing over 51 points per game to WRs (2nd) and most recently allowing the putrid New York Jets to throw all over them with Corey Davis and Jamison Crowder both finishing top 15 in PPR last week.

Hockenson is in a juicy matchup and presents a great leverage opportunity. The Vikings are allowing the single most adjusted fantasy points to the TE position. And Hockenson is the first legitimate fantasy TE that the Vikings have faced.

Gesicki has seen his routes rise each week that QB Jacoby Brissett has been the starter (68% to 71% to 74%). He’s also finished in the top 6 TEs each of the last 2 weeks, and the Bucs have been very susceptible to the pass across all positions. The Dolphins will likely have a hard time running in this game and may be playing from behind, a game script we saw play out in Week 3 against the Raiders.Brissett threw it nearly 50 times and Gesicki commanded 12 targets in that one.

As usual, I like to pay down at defense because it’s very unpredictable. The Texans defense at home against a rookie QB with 4 of 5 offensive linemen likely out seems like a pretty good bet for a solid floor.