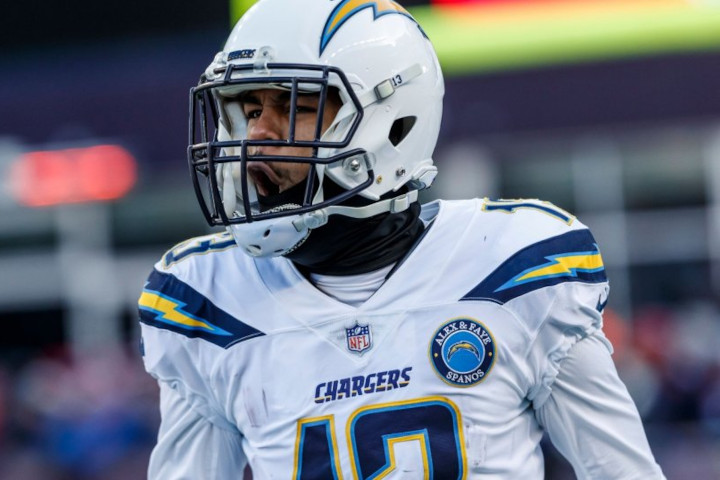 We survived the Bye-mageddon and now we’re rewarded with plenty of star talents back on the main slate. Plenty of enticing games this week for tournaments, so game selection will be crucial.

This is likely to be the highest owned QB on the slate, but for good reason. Allen averages over 30 fantasy points per game against the Dolphins in his career, including 22 total touchdowns in 7 games. This game also projects as the fastest-paced of the week.The Dolphins are allowing the 10th most adjusted fantasy points to QBs this season.

Last week marked the first time in 5 games that Brady failed to reach 40+ pass attempts. That level of passing volume combined with Mike Evans/Chris Godwin and the probable return of Rob Gronkowski this week is always enticing in tournaments. Some will be scared by the tougher matchup, but the Saints defense hasn’t had a test like Brady and the Buccaneers yet this season.

QBs they’ve faced outside of Aaron Rodgers in Week 1: Sam Darnold, Mac Jones, Daniel Jones, Taylor Heinicke, and Geno Smith.This game has a 49.5-point over/under, which is the 2nd-highest on the slate (and 91% of the money is on the over).

Many will choose to spend up at the QB position for Allen, Brady, Jalen Hurts, Matt Stafford and Justin Herbert, but Ryan presents a ton of leverage at his price point. Ryan has over 8 adjusted yards per attempt in 3 straight games. The Falcons offense has also recorded 4 straight games of positive passing DVOA after a tough first 2 weeks. Finally, the volume has also been present with Ryan throwing at least 35 passes in every game this season.

Kamara will see inflated ownership due to his blowup performance Monday night, but the Buccaneers matchup should be enough to scare some people. Kamara has seen 6.5 carries per game more than his career average of 12.9 in 2021. The targets have been slightly lower at 5.5 per game. But in one of the highest-scoring matchups of the week, Kamara will be a large part of the Saints scoring and this game script should be target-friendly for Kamara.

When Carlos Hyde missed Week 4 with an injury, we saw J-Rob regain his workhorse role from 2020. Even though Hyde has since returned, Robinson hasn’t relinquished that role. He’s received 17+ carries in 3 straight and is running nearly 70% of the Jags' routes over that stretch. This game could be high scoring with both teams ranking in the top half of the NFL in neutral-script pace of play.The Seahawks are allowing top 5 adjusted fantasy points to the RB position.

Moss is the #1 leverage play for large tournaments this week. Josh Allen should be the highest owned QB with Stefon Diggs and Emmanuel Sanders being popular.If that stack doesn’t hit, the likely scenario is that Moss rushed in a TD or two. The Bills are 2-TD favorites this week, and the Dolphins rank bottom 6 in adjusted fantasy points allowed to RBs.

Gaskin has seen varying usage in what seems to be a hot-hand approach in the Dolphins backfield. Malcolm Brown has been sent to the IR, though, which clears up this backfield as a 2-man committee with Gaskin and Salvon Ahmed. Gaskin received nearly a 70% share of the Dolphins backfield last season before Malcolm Brown arrived. The Bills should score heavily on the other side, leaving Gaskin in a target-friendly game script.

The positives for Moore include a near 30% target share and a 39% share of the Panthers’ air yards. Unfortunately, Sam Darnold has been a detriment to Moore hitting spike weeks since Week 3. This game presents a top 8 matchup in adjusted fantasy points allowed to WRs, so Moore should have a big one if Darnold doesn’t implode again.

Mike Evans is expected to see shadow coverage from Mashon Lattimore in this game.

These are Mike Evans’ receiving lines in games against New Orleans when he and Lattimore have matched up. 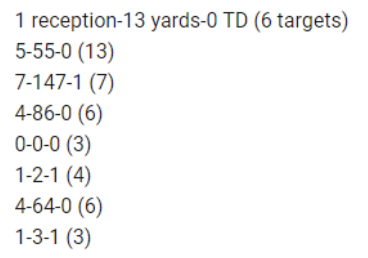 Godwin will be highly owned, but he’s what I would consider good chalk. It’s easy to project Godwin for 10+ targets with Evans in a tough matchup and no Antonio Brown. Plus, since he plays in the late games, you can late swap him out if your early plays were too chalky and you need some differentiation.

Allen has yet to show the high-end ceiling of his teammate Mike Williams this season. This may be the week, though.Allen has received double-digit targets in 3 of 6 games this season and 8 or more in 5 of 6. He also has a favorable matchup in the slot against Jalen Mills, who’s allowed 19-213-3 on 31 targets this season. This Patriots-Chargers game has the second-fastest pace of play only behind the Bills-Dolphins, which bodes well for Allen and the Chargers offense.

The Titans have been the 2nd worst defense in adjusted fantasy points allowed to WRs.Pittman has produced 15+ FanDuel points in 3 of his last 6 games. The Colts had All-Pro LG Quenton Nelson return from injury last week and they’ll get RT Braden Smith back this week, which should help them sustain offense going forward.

Mike Evans’ difficult matchup also boosts Gronkowski, who is likely to return from his rib injury after logging limited practices this week. Of Rob Gronkowski’s 20 targets in Weeks 1-3, 9 of them were either 20+ yards downfield or in the red zone.

Hockenson has commanded 20 targets over the last 2 games and has maintained his elite-level usage all season. He ranks 4th in route rate among TEs, 3rd in total targets and 3rd air yards share. This game has a 48 point over/under. Hockenson also provides a great run-back option for Jalen Hurts stacks and is a good differentiator from Dallas Goedert.

Mac Jones has thrown 6 INTs in the past 5 games and defenses are averaging the 9th most adjusted fantasy points against New England this year. The Chargers are also 4-point home favorites.