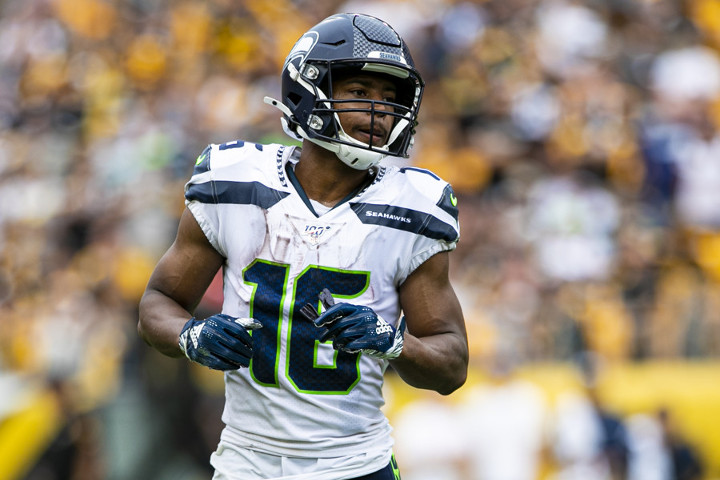 Priced as the QB5 on DraftKings, I think there is plenty of room for upside with Allen this week going up against the Seahawks, who rank 31st in pass defense and have faced the most pass attempts in the league.

Seattle has given up a top 12 QB in 6 of 7 games — and there is no reason to believe they will be able to slow down Allen, who was the overall fantasy QB1 through the first 4 weeks of the season.

Allen is 4th in the dollars-per-point rankings with a projected ceiling of 25.9 DK points. He currently has a FanShare projected ownership under 3%, which would make Allen my favorite GPP play of the week.

It’s a smash spot Cook coming off a 200+ yard, 4-TD game against the Packers.

Cook ranks 1st in dollars per point and will come in as one of the chalkier RB options on the Week 9 slate. With his high floor/ceiling combo I think he is a must play this week in an excellent matchup.

Cook should have a field day going up against the Lions’ 21st ranked rush defense that’s given up 12 rushing TDs in just 7 games.

In 2 meetings last season, Cook had 224 scrimmage yards and 3 TDs against this same defense. Further enhancing the outlook for Cook is that Matthew Stafford is on the COVID list, so the Vikings should dominate time of possession and have a positive game script.

With CMC just returning from injury, Alvin Kamara not on the main slate and Zeke Elliott banged up in a nightmare matchup, Cook offers the highest ceiling on the slate at the RB position.

Gibson is expected to come in under 1% owned this week and is a home favorite going up against a terrible Giants team.

The Giants rank 28th against the pass and 9th against the run. But coming off of a 20-128-1 game against the Cowboys, Washington will probably look to get its rookie RB going early and often.

If Gibson does in fact come in under 1%, I will be looking to roster him in at least 10-15% of my GPP lineups.

Priced as the WR9 on DK in an elite matchup, I will be rostering Lockett as a centerpiece of my Week 9 GPP lineups.

He’s the 6th ranked WR in dollars per point with a projected ownership over 20% against the Bills.

Lockett was extremely quiet in Week 8 with 4-33-0 against the 49ers after nuking the Cardinals for 15-200-3 in Week 7. I expect Lockett to bounce back in a big way as Buffalo has struggled to guard the slot position and teammate D.K. Metcalf may be tangled up with stud CB Tre White.

Lockett has already had 2 games this season finishing as the overall WR1 on the week. I think he has another good chance of doing it again this Sunday.

There was finally a change in Hardman’s snap share and routes run in last week’s win against the Jets.

Hardman’s Week 8 usage bump was notable as he finally passed Demarcus Robinson and Byron Pringle on the depth chart with season highs in targets (9), catches (7), and yards (96) on 68% of the Chiefs’ offensive snaps.

Hardman will be a boom-bust WR3 assuming Sammy Watkins misses another game — but offers elite upside at an affordable cost.

There’s not much to like at the TE position this week outside of expensive options Travis Kelce and Darren Waller.

In lineups where I need some salary relief, I will be looking to target Henry, who keeps getting cheaper as results have not been there.

Henry’s usage has remained somewhat strong with 7+ targets in 5 of 7 games on the season. Teammate Keenan Allen has been soaking up most of the targets, but I think a breakout game for Henry is coming soon. And it could come this week against the Raiders’ 27th ranked pass defense.

Henry ranks 2nd in dollars per point with a projected ceiling of 15.1 DK points and around 7% FanShare projected ownership.

Coming off of a slate-breaking performance against Jared Goff and the Rams, the Dolphins are still underpriced at just $2,800 against Kyler Murray and the Cardinals.

The Dolphins are 4-point underdogs, but I think they have a defense that is still underrated and matches up well against the Cardinals.

Miami has been generating a lot of pressure this season and Murray has the propensity to throw INTs and make mistakes while under pressure.

The Dolphins have quietly allowed 17 points or fewer in 4 of their past 5 games and haven’t allowed a top 12 QB performance in any of those games.

Murray’s dual-threat ability presents a challenge for the Miami defense, but I think they still have a decent ceiling with their ability to get sacks and potentially cause turnovers.