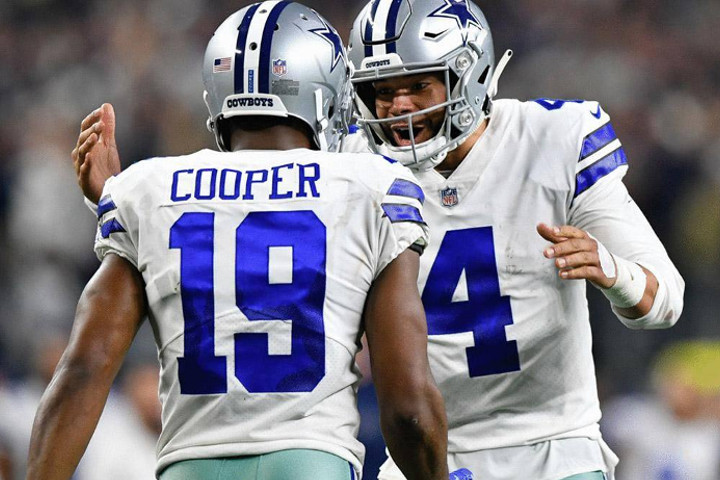 Stacking a QB with 1 of his pass-catchers is a profitable strategy in best-ball leagues. (We had the numbers to prove it way back in 2015.)

You should go into every best-ball draft looking to stack your QBs with his pass-catchers. That doesn’t mean you should reach well beyond ADP to make it happen. That negates any edge you would have gained from the stack. But you should certainly prioritize the stack when it’s within range.

What are the top stacks for 2020? Here are our 5 favorites, taking price and upside into account:

Prescott is easily the most expensive QB on this list. But he gives you flexibility with multiple stacking partners. Miss out on Cooper? Target Gallup a few rounds later. Miss on Gallup? Lamb and Jarwin are still good options. We even like stacking Dak with 2 of his pass-catchers.

With Prescott, Cooper, Gallup and OC Kellen Moore all back, this unit will benefit from continuity. Lamb could easily prove to be an upgrade over Randall Cobb, who ranked 42nd at his position in PPR points last year. And Jarwin is plenty capable of matching and even exceeding Witten’s numbers.

This is a risk/reward stack. If Roethlisberger struggles returning from that elbow injury or misses a bunch of games again in 2020, Pittsburgh’s pass-catchers will disappoint. But if we get a full season of healthy Ben, a Steelers stack could be a league-winner.

We only need to look back to 2018 to see the upside. That year, the Steelers ranked 1st in pass attempts, 2nd in pass yards and 5th in TDs. Roethlisberger ranked 3rd among QBs that year, producing a pair of top 8 WRs (Antonio Brown and JuJu Smith-Schuster) and a top 10 TE (Vance McDonald).

A productive Big Ben would likely mean similar numbers for JuJu while still leaving plenty of meat on the bone for Diontae Johnson and/or James Washington. We’re certainly betting on Johnson out-producing Washington, but it’s worth noting that Washington beat Johnson in yards per target and yards per route run last year. At his dirt-cheap price tag, he’s worth adding as an insurance policy with the potential to add standalone value.

The uncertainty in Philly’s WR corps is presenting us with some big value. Jackson and Reagor are both sitting outside the top 50 WRs in ADP. There’s a strong chance 1 of them returns a big profit — and it’s plenty possible that both do. Arcega-Whiteside is basically free after an ugly rookie season. But with a strong prospect profile, 2nd-round draft capital and plenty of opportunity, he makes sense as a late flier.

We’re out on Dallas Goedert at his price, and Alshon Jeffery is a fade coming off a December Lisfranc injury. Ertz is easily the most expensive stacking partner here but is a value in Round 5.

This is definitely a passing game to invest in. Despite tons of injuries to the QB and pass-catchers, the Eagles have finished top 13 in pass yards and TDs in each of the last 3 seasons. Wentz has ranked 3rd, 12th and 12th among QBs in fantasy points per game.

Woods remains 1 of our favorite values at the position. He’s coming off the board as WR18 but sits 7th in our PPR rankings. That’s just 3 spots higher than he ranked back in 2018, battling for targets with Cooper Kupp and Brandin Cooks. Woods finished WR14 last year, despite scoring on just 2 of 90 catches. With positive TD regression looming and Cooks gone, Woods looks like a WR1 at a WR2 price tag.

Higbee is a risk/reward pick at ADP. He closed 2019 with a flurry, leading all TEs in PPR and non-PPR points over the final 5 weeks. But he also spent his first 2.5 NFL seasons doing very little and still needs to contend with TE Gerald Everett. If Higbee hits, though, there’s a strong chance Goff returns value.

Say what you want about Goff as a real-life QB, but he’s been a solid fantasy option. In fact, he’s 1 of only 3 QB to rank top 12 in each of the past 3 seasons. He’s currently coming off the board 17th at the position.

Burrow is 1 of our favorite late-round QB targets. He’s coming off arguably the best season by a college QB of all time; he brings sneaky rushing upside; and he’s been gifted a strong group of pass-catchers.

Boyd is the safe stacking partner with Burrow. He’s ranked 15th and 17th among WRs in PPR points the past 2 seasons — but is now coming off the board as WR30. And if you’re worried about what a healthy A.J. Green would do to Boyd’s numbers, note that Boyd averaged more catches and yards per game with Green than without him over the past 2 seasons.

In deep best balls like the FFPC, you can even consider adding John Ross or Tee Higgins super late. Ross has the big-play ability to provide a few spike weeks, even if he’s Cincinnati’s #4 WR. Higgins is probably the favorite to win the #3 WR job after an impressive college career made him the 33rd overall pick of this spring’s draft.