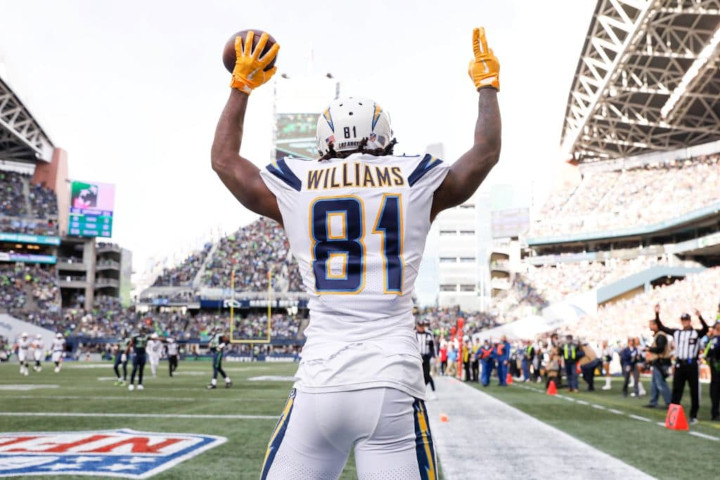 For just the 2nd time all season, Williams out-snapped backfield mate Melvin Gordon in Week 10. The margin was 33 to 25 in favor of the rookie, including a 12 to 3 edge after Gordon’s costly 4th-quarter fumble.

Will Williams continue to lead the backfield the rest of the season? We can’t know for sure. But it’d certainly make sense for Denver to expand the rookie’s role down the stretch. A Week 11 bye could help facilitate that move.

Williams has continued to be electric as a runner, averaging a gaudy 5.0 yards per carry. That includes 3.7 yards after contact per carry. Williams ranks 2nd to only Nick Chubb in Pro Football Focus’ Elusive Rating, which measures a runner’s contributions beyond the blocking he receives.

The Broncos’ schedule could also push Williams to a big finish. Denver has the easiest remaining RB schedule, according to our adjusted fantasy points allowed metric. The slate features 3 games vs. bottom-6 RB defenses, 2 against the run-funnel Chargers and 1 vs. a Chiefs team that Football Outsiders ranks 26th in run defense.

It wasn’t hard to see that Williams’ season-opening fantasy-scoring pace was unsustainable. His 1st 3 games produced 22 receptions, 295 yards and 4 TDs -- which would deliver a 117-1,573-21 line over a full season. But he has fallen too far off that pace over the past 4 contests.

The Chargers wideout has encountered 3 key issues in his recent downswing. The 1st was a knee injury, which limited his Week 6 playing time but doesn’t appear to be an issue anymore. The 2nd, a dip in target volume. And the 3rd a rise in average target depth.

Williams’ 3-game hot start found him working shorter routes much more than in the past. According to Pro Football Focus, his ADOTs checked in at 10.0, 9.7 and 9.8 for those games. The next 5, however, found no ADOT shorter than 13.4, with 3 games over 15.0. We like deep targets for the yardage and TD potential when they connect, but they’re also lower-percentage chances (less likely to be caught) and tend to not align with high target volume for the receiver. To wit, Williams has garnered just 15% target share over the past 3 games compared with 24.6% over the first 5 weeks.

His playing time hasn’t faltered, though. In fact, Williams’ 2 largest snap shares have come among the past 3 games. And his 2 highest route rates have come the past 2 weeks. Sunday might have also given us a signal that the Chargers want to get Williams more involved again. His 1.6-yard ADOT vs. Minnesota was his lowest of the year. All 6 of Williams’ targets for the game registered as “short.” He added a 7th in the “deep” range, which got wiped out because Williams drew a defensive PI call on the play.

The team would be wise to mix more Williams back in. According to Football Outsiders, the Chargers’ passing DVOA has mostly sagged in recent weeks.

Higgins has underachieved vs. his volume so far. He ranks 19th among WRs in targets per game but just 35th in PPR points per game.

There’s no reason that Higgins can’t return to that rookie-year efficiency. He ranks a solid 34th among 106 qualifying WRs in Pro Football Focus’ receiving grades. And, according to PFF’s Dwain McFarland, Higgins is 1 of only 10 WRs to beat single-man coverage 50%+ of the time. Translation: Higgins is still good at football.

He’ll also be helped by what’s again become a pass-leaning Bengals offense. Cincinnati opened the year run-heavy with QB Joe Burrow coming off the multi-ligament knee injury. But over the last 4 weeks, the Bengals rank 7th in situation-neutral pass rate. Remember that this was the league’s 4th-pass-heaviest offense in Burrow’s 10 games last season.

Higgins is a good bet for WR2 production the rest of the way and can possibly be acquired for cheaper than that.

A “buy” order here is often a signal to go get a guy. In this case, consider Robinson more of a “why not.”

Frankly, he can probably be found on a lot of waiver wires at this point -- and for good reason. Robinson sits 60th among wideouts in PPR points, right between Calvin Ridley and Sterling Shepard, each of whom has played 4 fewer games than the Bears receiver.

And that’s why he’s here. Robinson carries no value right now, which means there’s nowhere to go but up.

Chicago QB Justin Fields has earned the 2 best PFF game grades of his young career the past 2 weeks. He beat a San Francisco defense that just stifled the Rams and then should have had a road victory at Pittsburgh. And Chicago has dropped him back more in recent weeks. Fields dropped back 33, 20 and 26 times in his 1st 3 starts. That has climbed to 40+ in 4 straight outings. The Bears still ranked just 25th in neutral-situation pass rate over weeks 8-9, but that actually marked a rise vs. the range of weeks 3-7.

Robinson himself has given us no real signal of a looming spike in production. He did earn his 2nd-best PFF receiving grade of the year his last time out, though. Really, this is just a bet that the 28-year-old wideout with plenty of stud performances behind him hasn’t already passed his prime.

Take a low-risk, low-cost shot at Robinson now, with an ascending young QB, and see what happens.

The 28-year-old owns only 3 TDs, despite slotting top-5 in both targets inside the 20-yard line and inside the 10 (per Pro Football Reference). With Robert Woods out and Odell Beckham presenting bust potential, Higbee’s TD numbers figure to rise going forward. Despite some recent struggles from Matthew Stafford, this offense still ranks top-7 in yards and points per game.

If you started Stevenson in Week 10, chances are you won your matchup. Filling in for Damien Harris (concussion), Stevenson rolled up 100 yards and 2 TDs on 20 carries. He added 4 catches.

Stevenson was really good in this one, posting a Pro Football Focus rushing grade of 77.4. On the year, that would have ranked 16th among 62 RBs with 50+ carries.

Again, a strong showing for the rookie… but was it enough to steal substantial work away from Damien Harris? From Week 5 to Week 9, Harris handled nearly 60% of New England’s backfield attempts. On the year, he tops Stevenson in PFF grade, yards after contact per attempt and breakaway percentage (% of 15+ yard runs).

New England has a quick turnaround this week with a Thursday game at Atlanta. That’s an awesome matchup for all skill players, but note that Harris returned to a limited practice on Tuesday. Also worth considering: New England’s rest-of-season schedule looks like the league’s most difficult for RBs. The Pats still have a Week 14 bye, too.

It all makes this a good time to cash in your Stevenson chips.

You might remember when we called Pittman a “buy” back in B/S/H Report #2. That has certainly worked out. But now’s a good time to shop him around before the bubble bursts.

We still believe Pittman to be a good player and the top option in the Colts passing game. There’s just no way that he keeps scoring the way he has over the past 4 games. He has caught 24 of 30 targets (80%) over that span, for 81.5 yards and 1 TD per game.

Pittman ranks 2nd among all WRs in PPR points over that span but just 21st in our expected fantasy points per game.

The 2nd-year Colt does rank 12th at the position in targets across the last 4 weeks. So we’re not saying he’ll kill you the rest of the way. But if you’re looking to sell someone at a high point to bolster your roster overall, then Pittman is a prime candidate -- especially with a Week 14 bye still to come and the 5th-toughest remaining schedule for WR scoring.

None of us on the DS staff possess a law degree. And we haven’t seen any qualified legal experts — or league insiders — suggest a suspension is imminent for Cook. We know the league tends to drag its feet with potential player discipline.

So we’d resist the urge to panic sell Cook.

Now, on the field, Cook hasn’t met draft day expectations. He’s missed 2 games and sits 21st among RBs in PPR points. Interestingly, he sits 5th in Expected Fantasy Points per game (18.4). And per Rich Hribar of Sharp Football Analysis, Cook has been tackled at the 1-yard line a league-leading 5 times. None of those drives resulted in a Cook TD.

He still looks like a top-5 fantasy back, with just a small risk of 2021 suspension.

The rookie is hot. Smith has turned in PPR WR2 and WR8 finishes the past 2 weeks. And he’s done it despite seeing just 6 targets in both of those games.

That’s the concern, of course. If Smith continues seeing only 6 targets per game, he’ll struggle for more than WR3 value. But we’re expecting the volume to grow.

The Eagles have gone extremely run-heavy in their last 2 games -- the 1st against a Chargers defense that invites teams to run and the 2nd in positive game script vs. Denver. Philly passed on just 34% of their neutral snaps across those 2 games. QB Jalen Hurts totaled only 40 passes.

So, through that lens, Smith’s 12 total targets look a lot better -- a big 30% target share. If we look at the 4 games since TE Zach Ertz was dealt to Arizona, Smith has hogged 28% of Eagles targets and 41% of the air yards. Those are both top 10 marks among WRs.

If the Eagles throw it just a bit more the rest of the way -- a likely scenario -- Smith should be a solid weekly fantasy starter. Just don’t expect him to continue producing as a top-10 WR like he has the past 2 weeks.