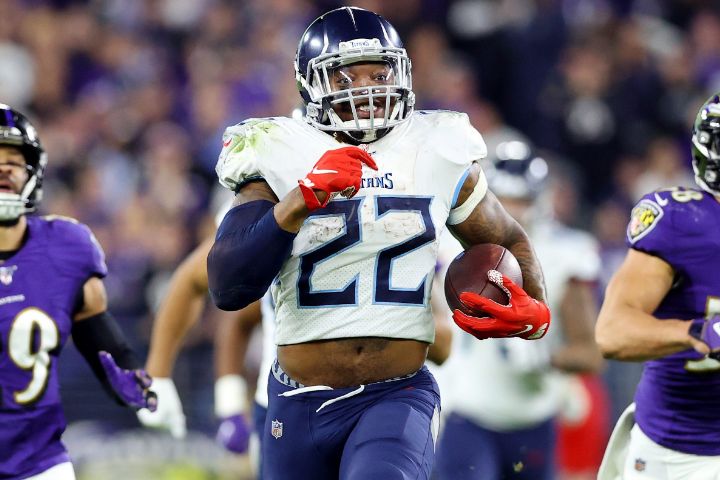 That’s the big storyline for this game. It’ll be the 1st test of this Titans offense without the NFL’s workingest of workhorses. The team quickly signed both Adrian Peterson and D’Onta Foreman after the news of Henry’s foot fracture, and each RB got elevated to the active roster ahead of this game.

The assumption, of course, is that Peterson carries most. We even got an NFL Network report to that effect earlier today. But will he lead in carries while ceding receiving work to Jeremy McNichols? Will it be more of a committee approach? Will we get more Titans passing than we’re used to -- perhaps nudged further in that direction by negative game script? Tennessee does hit the game as a 7-point underdog.

We, of course, won’t really know how the backfield sorts out until the game gets going. And that uncertainty opens up the options as we build our lineups for tonight. 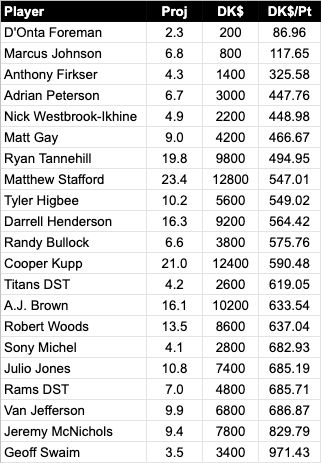 The DK salaries clearly favor the notion of Adrian Peterson as Tennessee’s lead ball-carrier, while D’Onta Foreman barely registers. Perhaps he offers absolutely no value tonight, but his absolute minimum salary makes him worth a shot in at least some builds -- if you’re going the multiple-lineup route.

On the Rams side, you know what’s up. They’ve had little trouble scoring points. Robert Woods enters the night questionable with a foot injury. He’s expected to play, but Woods’ situation could be reason to lean away from him and toward Van Jefferson in your player pool. 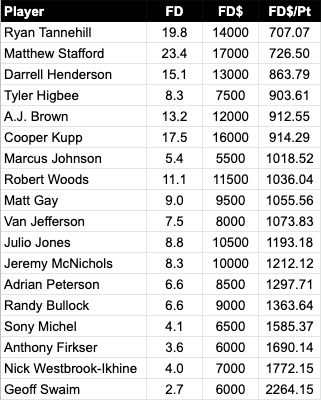 Chasing Tyler Higbee points has been frustrating this year. He appeared set up for at least a solid game last week against Houston but wound up getting just 3 targets and 25 yards. It was his 3rd game of less than 40 yards among the past 4. But Higbee did catch 5 balls in 2 straight before last week.

His salary is what really makes him stand out on FanDuel tonight, though. Higbee checks in $4,000 cheaper than Robert Woods and $500 shy of Van Jefferson’s price.