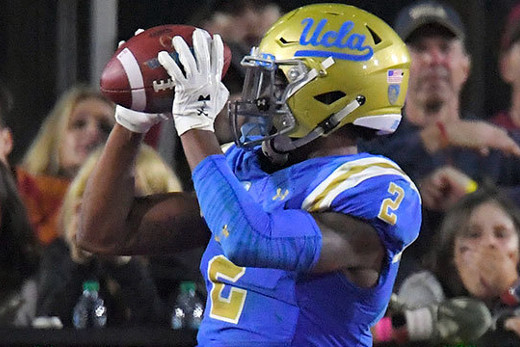 Lasley was redshirted in 2014 and played primarily on special teams in 2015.

He moved into the starting lineup the following year, leading the team in receiving TDs and finishing 2nd in both catches and yards. Lasley topped 100 yards in 2 of his final 5 games. That season was marred, though, by arrests for possession of alcohol and a fake ID.

2017 brought a breakout campaign — despite missing 3 games on suspension and 1 due to injury. Lasley averaged a whopping 140.4 yards and 1 TD in his other 9 outings. He posted 100+ yards in 7 of those 9 games and hit pay dirt in 7 different contests. His 3.15 yards per route run ranked 9th among all draft-eligible receivers.

Lasley was a big-play machine, recording 7 receptions of 40+ yards. His 18.3 yards per catch ranked 5th among all players with 50+ grabs.

Smooth is the best way to describe Lasley’s game.

He’s fast and fluid in his routes, with plenty of giddy-up to create separation.

Lasley lined up out wide and in the slot for the Bruins and ran a wide variety of routes at all levels of the field.

After the catch, Lasley surprises with his acceleration and speed. You see a lot of defenders taking bad angles and whiffing at air.

Lasley also boasts a bigger catch radius than you’d expect from a 6’1 receiver.

Lasley had a highly productive final college season at 20 years old. And there’s plenty of flash to his film. He’s an explosive route runner. He has the timing and body control to come down with contested balls. And he’s dangerous in the open field.


The drops are a tricky subject. NFL teams are willing to live with them when they come from big-time playmakers. Last year, for example, the “leaders” in drops were Dez Bryant, Keenan Allen, Amari Cooper and Demaryius Thomas. But when we’re talking about a mid- or late-round pick — which Lasley is expected to be — drops can prevent a guy from ever getting a chance to strut his stuff.

There are also off-field concerns here. NFL.com’s Lance Zierlein notes that Lasley has a “long history of poor decision-making and self-control dating back to high school. Multiple suspensions.”

We’ll see what that does to his NFL Draft stock, but it certainly adds risk to his dynasty outlook. Lasley looks like just a late-round flier in rookie drafts.