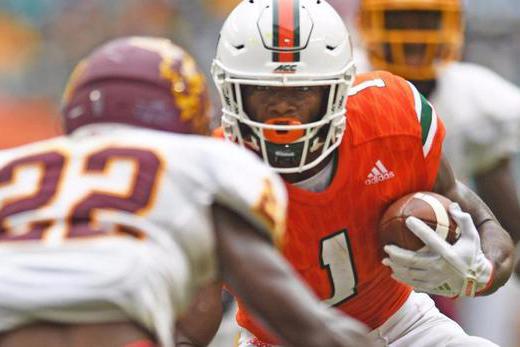 Walton seemed on his way to a stellar 3rd season at Miami before a pair of ankle injuries tripped him up.

The junior back ran over FCS Bethune-Cookman for a 16-148-2 rushing line in the 2017 opener. Three weeks later (but the next game), Walton sprained his left ankle late in the 2nd quarter of a win over Toledo. He stuck around that game to carry 4 more times after the break and rack up 204 yards on 11 attempts for the game. But Walton would leave the next contest early because of ankle trouble. And the final blow came in the 4th quarter against Florida State the following week. Walton left the field on a cart with a right ankle injury that required surgery. He touched the ball just 1 more time: a 4-yard kick return in the Dec. 2 ACC Championship game.

Walton’s 7.6 yards per rush in that abbreviated campaign followed his 5.3-yard average as a sophomore and 3.5 yards per carry in his debut. Walton ranked 2nd behind Joseph Yearby in rushes on that 2015 Hurricanes squad but led the team in rushing TDs and tallied 20 more receiving yards than Yearby on just 1 fewer reception.

In 2016, Walton overtook Yearby and claimed a 50% share of Miami’s rushing attempts. He also ranked 5th on the team in catches (1 behind TE Chris Herndon). Walton earned 3rd-team All-ACC honors while eclipsing 100 yards rushing in 6 of 13 contests.


Put aside the Duke and Florida State games from last season -- when Walton was already dealing with 1 sprained ankle -- and the Miami back can be fun to watch.

Because of his size -- and, of course, today’s NFL game -- Walton’s receiving might be the most important aspect. And it looks solid. I didn’t see any flashy examples of terrific hands over the 6 games I watched, but I also saw just 1 ball I’d call a drop (on a swing pass that probably wasn’t going anywhere).

I also saw a little guy unafraid to stick his nose into pass protection.

He’ll probably need some work, but willingness, experience and decent performance lay a strong platform for building an early role.

Walton can easily beat a plodding LB in coverage if he happens to find 1 -- though they’re dying off in the league -- and then maintains nice balance and determination through tough runs after the catch.

His willingness and ability to take a hit and keep going could increase Walton’s projected role beyond “3rd-down” type and into significant contributor to the run game as well.

Walton also seemed to display better agility than his pro-day results on the 3-cone and short shuttle indicate.

Or maybe you prefer Walton’s kangaroo impression against Toledo, after he had suffered the ankle sprain …

I’ve read knocks on Walton for bouncing too many runs outside, but I didn’t see a worrisome trend that way in the games I watched. He’s not overly powerful, but how many 200-pounders are?

Although Walton’s tape can be fun, there are factors working against him. For 1 thing, he’s not unique in this class. Nine of the 32 RBs at the Combine checked in at 205 pounds or less. Five of that group’s top 8 in career receptions weighed 205 or less. And 40 of the 150 draft-eligible RBs listed on 3SigmaAthlete.com weigh 190-205 pounds and stand shorter than 6 feet.

Walton’s testing numbers didn’t stand out either -- at least not for the right reasons. His Combine 40 produces an uninspiring 90.2 speed score, and he said he was fully healthy for it. Even if you take the 4.50 from his pro day, you still get a below-average 98.5. The 3-cone drill time from his pro day ties Walton for just 26th in this RB class.

On the positive side, his skills match nicely with current NFL trends. He should at least be able to contribute to passing plans and sports better rushing chops than many RBs of similar size.

The last piece here will be important, though: landing spot. With a bevy of similar backs in the 2018 NFL Draft class, where Walton goes in the draft order and the opportunity available figure to be key to his outlook for dynasty rookie drafts. His draft position also might tell us whether teams are worried about his repaired ankle.

Jonathan Williams. Bo Scarbrough. Darrel Williams. Are these really the key names heading into Week 12? And where can you find help this week and beyond on defense? 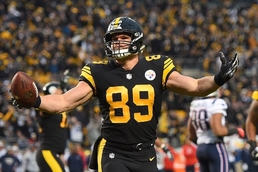 Having trouble getting excited about this Monday night tilt? You can give yourself a reason to care by setting a showdown lineup ... but not before you read about some key returns and matchup notes.