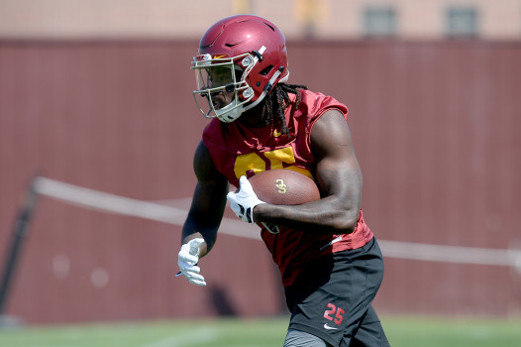 He excelled as a part-timer during his freshman and sophomore seasons. But after adding 10 pounds last summer, Jones truly broke out with 1,550 rushing yards. That placed him 6th in the nation. While an ankle injury forced 1 absence — Week 4 at Cal — he returned to a 14-128-1 line at Washington State.

That context — plus a USC O-line that was patchwork — says we shouldn’t worry about the dip in production. After all, Jones just registered Pro Football Focus' top rushing grade among RBs.

He’s frequently drawn Jamaal Charles comps, not only from scouts and analysts, but from USC OC Tee Martin.

“It doesn’t look like he’s working hard and he’s running by everyone,” Martin said via ESPN.

Jones shows elite stop-start ability. Here, he completely freezes a LB in the hole, breaks a tackle and picks up a 1st down. Per PFF Draft, only Nick Chubb and Rashaad Penny forced more missed tackles among draft-eligible RBs.

Jones should have lost yardage on this play ... yet again, he shows off impressive quickness and lateral agility.

Jones finds the cutback lane and aggressively hits the hole.

Jones gained 56 yards on the play above. That represented 30% of his season-long receiving total. While this particular play highlights his breakaway speed, it is puzzling why Jones played a small pass catching role. He caught just 32 passes for his career. And in 2017, he ranked 7th on the team in receptions.

NFL evaluators were robbed of a chance to see Jones' hands and route running at the Combine. Hopefully he's healthy in time for USC's March 21 Pro Day.

Jones dominated as a 20-year-old junior and exits USC with a massive 6.1 YPC mark.

A smallish build presents some durability concern. At 205 pounds, he might need to add weight this offseason. Last year, only Bilal Powell reached 175 carries (10.9 per game) among RBs weighing 205 or fewer pounds. Zero RBs fitting that profile reached 175 in 2016.

Jones could be an exception. But history says he'll probably need to hold a sizable receiving role for a shot at fantasy RB1 status. While the lack of pass-catching tape is eye-raising, Jones looked like an NFL contributor in limited chances. He's certainly the type of athlete you want to utilize in space.

Expect Jones to come off the board by mid-Round 2 of the NFL Draft.