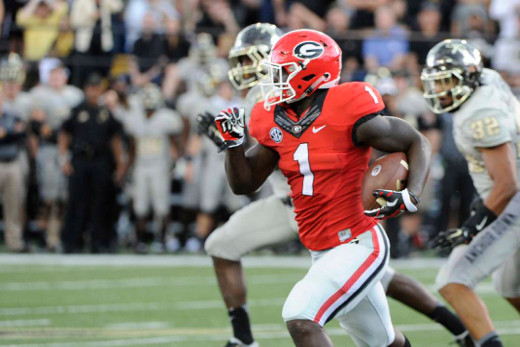 The Bulldogs sure do attract top-level RBs…

While Michel exits college on the older side, having played with such talented teammates might help his longevity. He averaged just 163.7 touches per season. His biggest workload (2015) surfaced after Todd Gurley left for the NFL and Nick Chubb suffered a season-ending knee injury in October.

Michel certainly put enough on tape to get us excited. He notched a career-high 7.9 YPC in 2017, hitting 4.6 in all but 1 game. We’ll see his NFL-quality traits in the next section.

For now, consider his strong underlying numbers, per Pro Football Focus. They credited Michel with a career-best 3.8 yards-after-contact mark in 2017. He also ranked a solid 6th (among draft-eligible RBs) in PFF’s Elusive Rating.

Compactly built, it’s possible Michel gets a shot to become a 3-down back. His injury history is noteworthy, but it’s not a major red flag.

Michel also had an MRI on his knee last December, but he played through any injury. We didn’t catch any negative buzz about his health at the NFL Combine.

What’s more concerning is Michel’s fumble rate. At 1 every 54.6 touches, his rate is among the worst in this draft class.

It’s something to monitor early in his career.

Michel gets help from a lineman in the clip above, but it's an impressive showing of leg drive nonetheless.

Beyond ball security, it's tough to find a true negative with Michel.

If we're getting picky?

His YPC from 2017 looked to be inflated given an O-line that opened massive holes. Just watch the Oklahoma game -- or get a sample below. As if there wasn't enough space, the LB takes himself out of the play and the safety falls down. In total, Michel ripped off a 11-181-3 line against the Sooners.

Another minor poke at Michel has to do with his receiving talent. While his drop rate (6.7%) isn't ideal, he's clearly a playmaker. Back in 2015, HC Mark Richt even called Michel a "gifted" receiver. With seasons of 22 and 26 catches behind him, Michel could carry some PPR upside in the pros...

Size. Production. Power. Elusiveness. Michel's the complete package, and as such, he'll likely be a top-50 pick later this month. That'll position him for instant fantasy value -- especially if his name is called by a particularly RB-starved team (say, the Colts, Giants or Bucs).

Perhaps most optimistically, NFL Network's Mike Mayock has compared Michel to Alvin Kamara. Colleague Lance Zierlein went a bit tamer with Knowshon Moreno (although recall that he went 12th overall in 2009 and had his career ruined by knee issues).

Michel's clearly in the top-5 mix for dynasty rookie drafts.