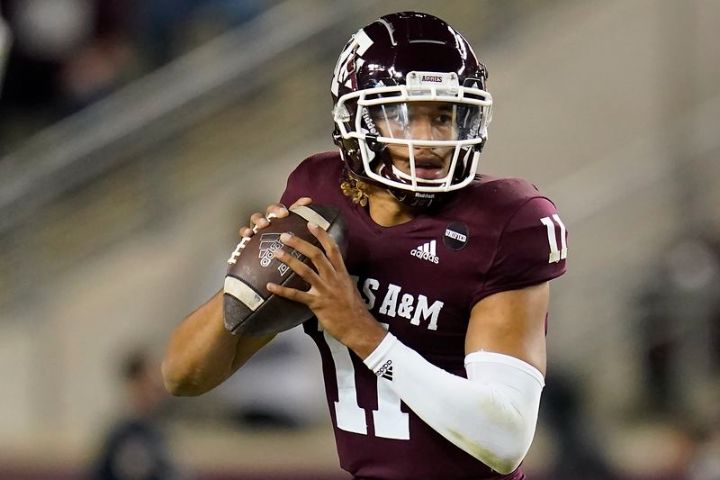 Mond ran a 4.62-second 40-yard dash (4.67 with the Pro Day adjustment). Even the adjusted time rates 85th percentile among QBs. He didn’t offer up any other measurements, though. He did, of course, do the roll left, throw deep thing that is apparently now mandatory.

Mond opened his high school career delivering strong dual-threat numbers in San Antonio, throwing for 3,166 yards and running for 2,040 over his sophomore and junior seasons. He then transferred to IMB Academy in Florida for his senior campaign and set program records for passing TDs (20) and rushing TDs (18) in a single season.

According to Dane Brugler of The Athletic, Mond also ran the anchor leg of a 4x400 relay team that advanced to the 2015 Texas state championships.

A 4-star recruit, Mond was rated top 8 at the position overall for the class of 2017 and the #3 dual-threat QB behind Tua Tagovailoa and Tate Martell. Mond originally committed to Baylor before his junior season but altered his plan amid the sexual-assault scandal that embroiled that program. He then chose Texas A&M over Ohio State and Auburn -- with other offers including LSU, Georgia, Clemson and Miami.

Mond appeared in 11 games as a true freshman with the Aggies, including 8 starts under then-coach Kevin Sumlin.

Mond took over the offense in 2018 under new HC Jimbo Fisher. He started all 13 games for a team that went 9-4 and finished the year 16th in the AP poll. Mond tied for 5th in the SEC in TD passes, tossing 24 of those vs. just 9 INTs. His biggest game was a 430-yard, 3-TD (0-INT) performance in a narrow Week 2 loss to Clemson. That included an A&M record 330 yards passing in the 2nd half alone and his highest passer-efficiency rating of the year (172.6). Mond also tossed 6 TD passes in a nutty 74-72, 7-OT victory over LSU in November.

The QB was named team offensive MVP, Most Improved Player and Top Conditioned Athlete at the end of the season.

The Aggies lost lead pass-catcher TE Jace Sternberger and lead back Trayveon Williams from that squad. Mond saw a slight dip in efficiency. His passer rating went from 135.0 to 131.1, his yards per attempt from 7.5 down to 6.9 and his Pro Football Focus passing grade from 78.0 to 76.7. Mond did boost his completion rate from 57.3% to 61.6%, though.

Along the way, he tossed 3 TD passes in a game 3 times and rushed for 76+ yards in 4 games -- including a 12-117-1 rushing line in the Texas Bowl win over Oklahoma State. The game before that, however, found arguably the worst outing of Mond’s career: 10-of-30 passing for 92 yards and 3 INTs in a blowout loss at LSU.

Mond’s senior season found him rebounding in just about every category. He posted career highs in completion rate, yards per attempt and passer rating, while delivering an 81.7 passing grade. PFF credited him with a decline in the percentage of his throws charted as accurate, though: 53.4%.

“It’s difficult to say if we actually saw any progression from Mond or if he just played behind the best offensive line of his career,” the PFF draft guide says.

Mond tossed 3+ TD passes in 4 of 10 games in his final season, reaching 300 passing yards twice. He joined Tim Tebow and Dak Prescott as the only SEC QBs with 9,000 career passing yards and 1,000 rushing.

He closed out his college career by taking Senior Bowl MVP honors with 173 yards and 2 TDs on 13-of-25 passing.

The 4 games I watched make up less than 10% of Mond’s total college starts, so I won’t pretend to paint a full picture of the prospect here. But I believe I’ve gotten enough for a fantasy starting point.

The rushing is what has a chance to differentiate Mond from other QBs (beyond the top shelf) in this class. He’s not a flashy runner, but he’s fast enough to exploit opportunities.

Despite posting big rushing numbers for his college career, Mond looks like he could actually stand to trust his wheels a little more often. According to Pro Football Focus, he scrambled just 16 times all last year, tied for 62nd most among 154 draft-eligible QBs.

Part of that was good protection. Mond took just 8 sacks over 10 games in 2020. But you can find occasions where he probably should have run instead of throw …

Even when he’s not escaping the pocket, Mond is capable of delivering throws with the rush in his face.

There are some accuracy issues, as the PFF numbers alluded to above. It’s not a glaring deficiency by any means. But there are cases where being just a little off interrupts the connection.

Mond is also capable, however, of driving the ball right where it needs to be.

He can also throw a nice deep ball, though his consistency on that front can waver.

Draft capital could tell us a lot about Mond. He started 44 games at Texas A&M. For comparison’s sake:

So there’s a lot of tape out there. His NFL team should have a pretty good idea of what it’s getting. If Mond leaves the board by the middle of Round 2, then a team just might have Jalen Hurts-type hopes for him. (I liked Hurts better as a real and fantasy prospect, though.)

The Athletic’s Dane Brugler and PFF’s Mike Renner have Mond pegged as a 4th-round prospect. NFL.com’s Lance Zierlein says Round 2-3. Grinding the Mocks has Mond’s consensus position at 66th overall, which would be 2 picks into Round 3.

Mond’s extensive starting experience helps his outlook. Numberfire’s Jim Sannes found back in 2016 that QBs with more college starts tended to fare better in the pros.

It’s also nice that he increased his completion rate every season at A&M, though Mond checked in just 84th among 154 draft-eligible QBs in PFF’s adjusted completion rate in 2020.

There certainly could be enough here to get Mond a shot at starting in the NFL. It's also possible, though, that he topped out as a good college QB and is headed for Brett Hundley's pro career.

Overall, Mond looks like a decent prospect. And the running ability gives him upside well beyond “decent” in fantasy. In a nice landing spot -- and especially inside the 1st 3 rounds -- Mond could be worth a look early in Round 3 of superflex rookie drafts, perhaps even late in Round 2.