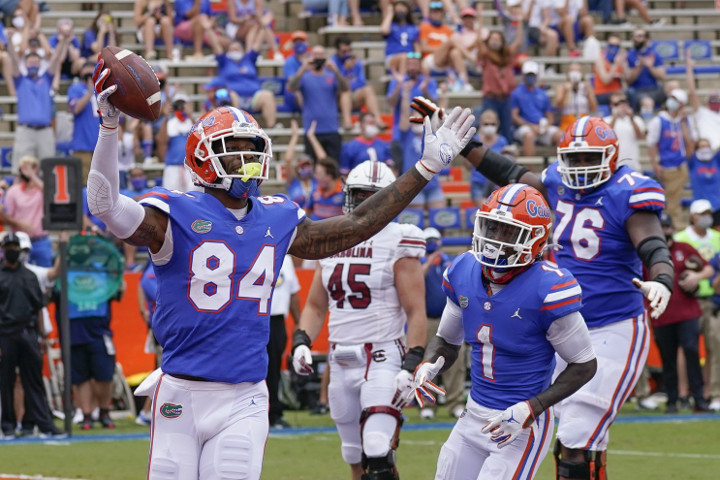 Pitts chose to play at Florida over major suitors like Alabama, Ohio State and Georgia. So you know expectations were lofty for the high school All-American.

After a quiet freshman season, Pitts broke out as a 19-year-old sophomore. His 54 catches led the Gators; his 649 yards ranked 2nd behind current Ram Van Jefferson.

Then came an excellent 2020. Playing alongside returning QB Kyle Trask — a potential top-50 pick next month — Pitts tallied 43 catches, 770 yards and a team-leading 12 scores. He did so in just 8 games, missing 4 due to a concussion and an undisclosed injury.

Despite a leaner frame, Pitts actually graded out slightly above average (65.8) as a blocker. per Pro Football Focus. He's at least functional in that area entering the NFL.

Pitts beat NFL-quality DBs with a combo of plus size and WR-like movement skills. Add in a massive catch radius, and you can see how his length will be tough to defend at the next level.

Pitts' quick feet help him dodge pressing DBs. According to Pro Football Focus, the Philadelphia native earned the best grade vs. press coverage (among TEs). Plus, his 4.91 yards per route run vs. man coverage ranked 3rd best among all pass catchers.

There's room for his frame to fill out a bit at 6'6, 235 pounds, but he certainly showed adequate play strength on tape. Here he is uncovering from South Carolina CB Jaycee Horn, a likely 1st-round pick come April.

This guy's body control is exceptional. Just get the ball somewhat close, and there's a good chance he'll make the catch.

Pitts has everything you want in a TE prospect:

A 6'6 frame with an enormous catch radius.

Strong hands and body control to make catches in traffic.


Pitts' most realistic destinations include Miami, Atlanta, Cincinnati and Philadelphia. Cincinnati looks like a dream spot with 24-year-old Joe Burrow in place. Atlanta looks favorable from a scheme perspective. New HC Arthur Smith -- a former TE coach -- oversaw an offense that shuffled a huge 29.5% target share, a 29.7% reception share and a 26.3% yardage share to Tennessee TEs in 2020. (Hayden Hurst is far from a lock as Atlanta's long-term answer.)

Regardless, Pitts' overall profile will give him a chance to deliver fantasy value in year 1. For now, he checks in at TE17 in our 2021 rankings.