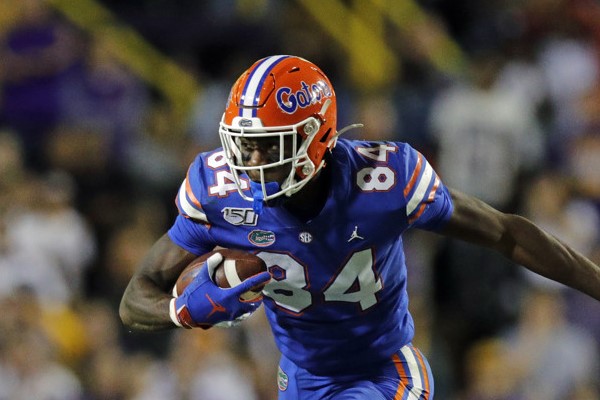 Week 14
The biggest problem with Pitts’ 5-61 receiving performance in Sunday’s win over the Panthers is that it stands as his 4th-best fantasy line of the year.

The numbers were good enough for a TE9 finish in PPR for the week and much better than the season-worst 2-13 he posted on a matching 6 targets in the 1st meeting with Carolina. But it marked the 1st time since Week 7 (Calvin Ridley’s last game) that Pitts has reached 5 receptions in a game and just the 3rd time over that 7-game span that he reached 4 catches.

The rookie’s usage remains good, at least: He has dipped below 6 targets just once all season and has claimed 21.6% target share in the 7 games since Ridley left.

The Week 15 matchup with San Francisco matchup has been negative for TE scoring on the year, though Pitts often sees different individual matchups than more typical TEs. Week 16 against Detroit should present a favorable environment for anyone on offense.
Week 13
Pitts got off to a decent start in Sunday’s loss to the Bucs. He led the Falcons with 5 targets, 4 catches and 48 yards at halftime, drawing 26.3% of Matt Ryan’s total attempts to that point. But Pitts would see just 2 more looks the rest of the game and catch neither of them.

Unfortunately, that 4-48 line marked Pitts’ 3rd best fantasy outing among the past 6 games. He hasn’t topped 7 targets in a game since the last time Calvin Ridley played (Week 7 in London). Pitts also ranked just 11th among TEs in expected fantasy points for Week 13. He has fared a little better over the past 4 weeks, ranking 9th at the position in expected fantasy points per game. And now Pitts gets the league’s worst remaining fantasy schedule for TE scoring.

Unfortunately, it’s unlikely you can find a clearly better option on waivers.
Week 12
Pitts caught 2 of 6 targets for 26 yards in the Falcons' Week 12 win over the Falcons.
Pitts has really struggled the past couple weeks without Calvin Ridley in the lineup as defenses are keying in on taking him away as they are simply not scared by anyone else on this team lacking talent.
Pitts has a chance to bounce back in Week 13 with consistent volume and should be used as a TE1 where the Falcons will most likely deploy a pass-heavy game plan as 11-point underdogs against the Bucs.
Week 11
With RB Cordarrelle Patterson and WR Calvin Ridley both out, Pitts was the clear focal point for Bill Belichick’s Patriots defense on Thursday night. According to Pro Football Focus, New England used double or help coverage on 31% of Pitts’ routes.

And it worked. Pitts finished with just 3 catches on 5 targets for 29 yards. One of those missed targets was picked off by DB Devin McCourty.

The good news for Pitts is that he doesn’t face the Patriots again this season. In fact, he gets a prime bounce-back spot in Week 12 vs. Jacksonville’s 27th-ranked TE defense. That’s followed by a neutral draw against the Bucs and then 4 straight negative matchups.

Pitts might not be a league-winner down the stretch. But volume and talent should propel him to easy TE1 production.
Week 10
After Pitts stopped catching passes on the 2nd play in the 2nd half, there wasn’t much to say for any Atlanta offensive player. He finished the game with 4 catches on 7 targets for 60 yards. RB/WR Cordarrelle Patterson barely played after the 1st quarter, so the Dallas D could zero in on Pitts in a depleted passing game.
A large part of Pitts’ near future depends on Patterson’s availability. It appears that Patterson (sprained ankle) won’t play after a quick turnaround to a home game against New England Thursday night. That would leave Pitts as the only dynamic player in the Atlanta offense. He has set a rookie record for a TE with 606 receiving yards. The down side is that he has only 1 TD. Patriots HC Bill Belichick used media hyperbole to prepare New England’s D: “This guy is one of the superstars of the NFL already.”
Week 9
Pitts is clearly on his way to the best rookie TE season of all time. Currently, Pitts sits 3rd in TE receiving yards and 8th in receptions on the year. The disappointing part is Pitts has only found the end zone once so far. It is clear without Calvin Ridley teams are keying on Pitts, which has resulted in back-to-back slower games for him. The good news for fantasy managers is even in a slow game (3-62) in Week 9, Pitts does enough to compete for TE1 numbers.
In Week 10 Pitts has a chance to have another big game as the Falcons take on the Cowboys. The Cowboys have given up the 11th most points to the TE position on the year. This includes solid games to Tyler Conklin (5-57), Zach Ertz (4-53-1) and Rob Gronkowski (8-90-2). The matchup along with the usage make Pitts a candidate for DFS lineups in Week 10.
Week 7
Perhaps Pitts’ Week 6 bye did him some good. After posting 9-119-1 in Week 5 without Calvin Ridley, the return of Ridley in Week 7 didn’t stop the rookie from dropping 7-163 at Miami. Poor S Eric Rowe had little chance of stopping Pitts on this day. He made several impressive downfield grabs, including a one-hander fit for a highlight reel. The 21-year-old also showed impressive body control on a number of routes, ones he routinely ran from the slot or out wide. He’s essentially a Mike Gesicki-like WR/TE at this point. With Atlanta’s offense on the rise, Pitts looks like an elite TE rest-of-way.
Week 5
Pitts logged a monster 9-119-1 stat line in the London win over the Jets. He was targeted a team-high 10 times, with Calvin Ridley and Russell Gage out. Pitts’ TD was a thing of beauty as he out-jumped the opponent and hauled in the highlight-reel catch.

Pitts’ stats finally caught up to his usage in Week 5. We’re not expecting many more fantasy tallies like that. But the rookie ranks 4th among TEs in targets for the year, 4th in yards and tied for 5th in receptions. That’s the range in which you should consider him as a fantasy option.
Week 3
Pitts totaled 35 yards on two receptions last week in the win over the Giants. He was targeted just 3 times in the contest as we saw QB Matt Ryan turn to veteran WRs Calvin Ridley and Cordarrelle Patterson for half of his pass attempts. Pitts made the most of one reception, showcasing why he was so highly coveted coming out of Florida. We’re not worried that Pitts wasn’t targeted as much as he was in the previous two games. His talent speaks for itself, and games like this are to be expected. Pitts is still looking for his 1st TD, but it could be coming soon with games against Washington and New York Jets before their Week 6 bye.
Week 2
Pitts caught 5 of 6 targets for 73 yards in the Falcons' Week 2 loss to the Bucs.
Pitts flashed some of his elite upside with multiple 24-yard receptions, including a one-handed snag on a ball that was well behind him on a 3rd and long play
The Falcons will most likely be among the pass heaviest teams in the league due to a bad defense and shaky run game, so Pitts should continue to be a TE1 as the 2nd option in the Falcons passing attack behind only stud WR Calvin Ridley.
Pitts is an easy top 10 TE play in Week 3 against the Giants.
Week 1
Rough debut for Pitts, but probably not as rough as the numbers made it look.

Pitts caught his 1st target of the game on the opening drive, but couldn’t get his 2nd foot down to make it count. He would finish the 1st half with just a 1-yard catch among 4 targets.

His 1st look of the 3rd quarter produced an 11-yard reception, but an offensive PI call negated it. Pitts later secured an 18-yard catch (that counted) for Atlanta’s longest play of the game. But he finished with just a 4-31 receiving line on 8 looks.

Those 8 official targets gave him a strong 22.9% target share, though, and Pitts spent 80% of his snaps in the slot or out wide, according to Pro Football Focus. That made him more WR than TE, which is good for his fantasy outlook.

If you entered the season banking on Pitts, don’t overreact by giving up on him already.

Pitts has the elite physical traits and athleticism to forecast both an excellent long-term career — and a strong year 1. New HC Arthur Smith is an up-and-coming play-caller, while Atlanta should continue to lean pass given an iffy backfield and defense.

Mix in the Julio Jones trade, and Pitts could perform as a top-5 fantasy TEs this fall. He’s simply being drafted near his ceiling, with an early-summer FFPC ADP of TE4.

Falcons TE Kyle Pitts (hamstring) is active for today’s game vs. the Saints. He got in limited practices on Thursday and Friday but comes with elevated risk in Week 18 fantasy lineups.

Falcons TE Kyle Pitts (hamstring) is listed as questionable for this weekend’s game vs. the Saints. He got in limited practices on Thursday and Friday. Pitts said Thursday that he expects to play, but the team will have the final say. Falcons-Saints doesn’t kick off until 4:25 pm ET on Sunday, but we’ll look for an update on Pitts’ status that morning.

Pitts back at practice Thursday

Falcons TE Kyle Pitts (hamstring) returned to a limited practice on Thursday. He told reporters afterward that he'll play vs. the Saints this weekend, but we wouldn't take his status for granted just yet. We'll get another update on Pitts on Friday afternoon.

Falcons TE Kyle Pitts (hamstring) did not practice on Wednesday. He needs 59 yards to break Mike Ditka's record for receiving yards in a season by a rookie TE, but it looks like he might not get the chance.

Falcons TE Kyle Pitts suffered an apparent hamstring injury in the 1st half of Sunday’s game at Buffalo. He posted 2 catches for 69 yards before departing. We’ll let you know if he returns in the 2nd half.

Update: Pitts returned for the start of the 2nd half.