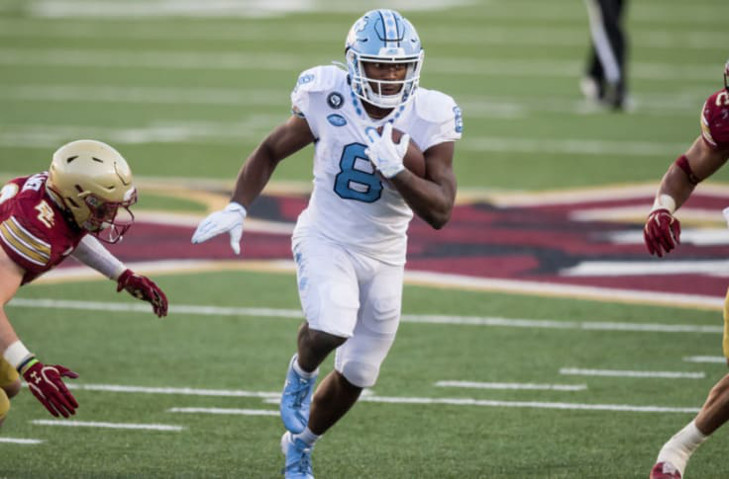 As a 2018 sophomore, Carter missed the first 3 games with a broken wrist. He still came within 7 carries of attempt leader Antonio Williams, a junior at the time who appeared in just 1 additional game. Carter also led the backfield with 25 catches.

2019 brought the emergence of Carter and Javonte Williams, the perfect power complement. Carter out-carried Williams 177-166 and out-targeted him 24-17.

Voted a team captain as a senior, the 21-year-old took another step into the national spotlight. Again sharing carries with Williams, he posted a school-record 8.0 yards per carry and 10.7 yards per catch. Carter really embarrassed Miami (FL) with a 24-308-2 rushing line, including a career-long 65-yard run.

Carter earned a better PFF rushing grade (91.1) than Najee Harris and Travis Etienne did in any of their 8 combined seasons.

Like his backfield cohort, Carter recorded one of PFF’s top Elusive Ratings (135.1) and yards-after contact averages (4.47). Other independent evaluators have repeatedly heaped praise on the Tar Heel throughout the pre-draft process.

“The discipline that he has in addition to his vision, quickness and ability to catch the football.” ESPN’s Todd McShay said of Carter's strengths. “He’s what you want in your locker room and your team.”

An eye-opening Senior Bowl experience further solidified his draft stock. Carter made Daniel Jeremiah’s list of 10 winners from the week back in January:

“Every now and then there's a player who just pops off the screen when I sit down to watch tape, and Carter was that guy this year,” DJ wrote. “He showed burst and an ability to make plays out of the backfield as a receiver. I think he has a legitimate shot to be a Day 2 (Rounds 2-3) pick. In an era when running backs are being devalued, he has a unique skill set. I envision him playing a role similar to the one Nyheim Hines fills for the Colts.”

Carter’s former HC — Mack Brown — isn’t exactly an impartial evaluator. But his words still hold some weight, as the pair spent over 2 years together.

“Michael's got great vision as a runner,” Brown said via Pensacola News Journal. “He can catch the ball, but he's got the speed to go score and run over people.” Brown went so far as to compare the Carter/Williams duo to the Reggie Bush/LenDale White tandem that dominated at USC in the 2000s.

Carter looks more like Hines/Dion Lewis than Bush. But there’s no doubt his tape was impressive.

Your first impression of Carter might have something to do with his size. UNC listed him at 199 pounds, and he came in at 201 at the school’s Pro Day on March 29. He’s a hair under 5’8.

So it's fair to question how his NFL team will use him on inside runs and early downs.

That said, Carter did well making himself smaller in tight spaces and using his low center of gravity to break tackles.

Make no mistake about it, though. Carter projects well in the pros because he can dodge tacklers with plus agility, vision, burst and acceleration...

Carter's pass-catching ability is perhaps even more essential. He primarily ran angle routes, wheel routes and swings at UNC. He fared well in both the short and deep passing game, dropping only 1 pass while showing more elusiveness post-catch.

Carter wasn't a textbook pass protector. Mike Renner of Pro Football Focus even admits there's "worry" about him in that area. Still, it's unwise to just write him off as an automatic liability. In 2020, Myles Gaskin, Darrell Henderson and Devin Singletary combined to allow only 6 pressures on 160 combined pass blocking snaps. All of those guys bring size that comps favorably to Carter.

Carter will always be a long-shot for RB1 value. Smaller backs like Austin Ekeler (5’10, 200) and Devonta Freeman (5’8, 206) have showed it’s possible in recent seasons, but they’re outliers.

Carter’s Dynasty League Football ADP isn’t in Round 1 (like it is for Najee Harris, Travis Etienne and Javonte Williams). He’s going late in Round 2 as the RB7. That’s a reasonable range to take a shot on someone who profiles as 1 of the top receiving backs in this class.