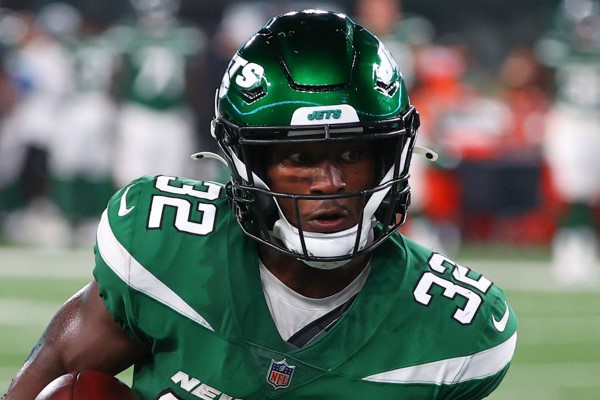 Carter’s college tape showed he was a player to get excited about.

While undersized, his diverse skill set looked beneficial for fantasy.

And we saw that in spurts last year for a Jets squad overrun by injuries and poor QB play.

2022 brought on the arrival of a potential workhorse back in Breece Hall. We believe Carter will retain a role, especially in passing situations. But this will certainly be a key battle to watch in training camp. And there's no doubt Carter's upside isn't what it was months ago.

For now, the 2nd-year back projects as an RB4.

Jets RB Michael Carter has been diagnosed with a low-ankle sprain, HC Robert Saleh said Monday. It's not considered a long-term injury, according to ESPN's Rich Cimini. Carter's availability for this weekend's game vs. the Vikings is uncertain, though. We'll monitor his status throughout the week.

Jets HC Robert Saleh said after Sunday's win over the Bears that RB Michael Carter has a sprained ankle but that the severity isn't yet known. We should have a better idea of Carter's status by the end of Monday.

Jets RB Michael Carter suffered an ankle injury in the 2nd half of Sunday's game vs. the Bears and is officially doubtful to return. With RB James Robinson scratched, New York is down to RBs Zonovan Knight and Ty Johnson.

Despite dealing with some injuries and a bad Jets offense, Carter averaged 4.3 yards per carry and caught 36 balls as a rookie. But the arrival of 2nd-round rookie Breece Hall figures to relegate Carter to change-of-pace duties.