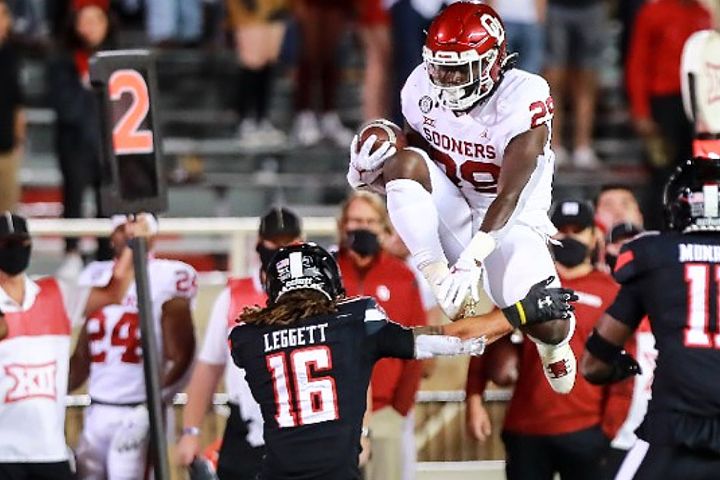 Stevenson was named Las Vegas Sun player of the year as a high school junior but then missed nearly all of his senior campaign with a broken foot. That contributed to him being a 0-star recruit -- and ultimately taking a year off from football after high school.

Stevenson then landed at Cerritos Community College in California but had to wait his turn behind a pair of sophomore RBs the coaching staff had already committed to. Once he climbed the depth chart in Year 2, though, Stevenson dominated. He ran for 2,111 yards and 16 TDs in 11 games. He averaged 9.5 yards per carry while going over 100 yards in every contest -- including 5 games of 200+.

After that 2018 season, 247Sports rated Stevenson a 4-start JUCO recruit (Rivals 3 stars). Oklahoma won out over 8 other offers, including USC, Texas, Kansas State and BYU.

Stevenson again found 2 incumbents ahead of him on the RB depth chart with the Sooners -- plus leading rusher and Heisman finalist Jalen Hurts. Kennedy Brooks would lead Oklahoma RBs that season, but Trey Sermon had a falling out with HC Lincoln Riley that afforded the new guy more opportunities. Stevenson still failed to reach 10 carries in any game and cracked 50 yards rushing just 3 times.

Sermon transferred to Ohio State after the season, though, and Brooks opted out for 2020. That should have left Stevenson to lead the way, but he spent the 1st 5 games completing a 6-game suspension for a single positive marijuana test. (Riley has decried the NCAA rule as “archaic” on more than 1 occasion since.)

Stevenson did take over upon his return and still wound up leading the team in carries, rushing yards and rushing TDs. His 6.6 yards per rush were most on the team for players with at least 10 attempts. His 3.0 receptions per game also ranked 4th on the team, less than half a catch behind leaders Marvin Mims and Theo Wease (3.36 each).

Unfortunately, I was only able to find 3 games available, but they lined up pretty well in what they showed of Stevenson.

You’d expect a back of his size to be useful in short-yardage situations, and Stevenson doesn’t shy away from contact.

He also appears to know his limitations, pushing a run like that through the middle rather than seeking to bounce it left.

Stevenson’s strength can make him hard to bring down away from the pile as well.

But he’s not just a thudder. Stevenson possesses nimble feet for a big RB.

And he loves to break out the spin move.

Stevenson does not boast top-shelf speed or acceleration. That limits his big-play ability, and it could become more of an issue vs. faster defenders and closing rush lanes in the NFL.

Here we see the urgency of knowing he can’t dance looking for a lane on 3rd-and-long, but we don’t see the burst or agility to turn it into an even bigger play.

But as I mentioned earlier, the reps I got to see pointed to a guy who knows what he is. Stevenson relies on his vision and follows his blocks to get what’s there.

And rather than bouncing around behind the line, looking for a lane, he seems to keep his momentum moving forward through his cuts and spins.

The only receptions I saw Stevenson make were of the swing-pass/checkdown variety. He split out wide twice and motioned to a slot position once in the Florida game but only saw 1 target among those 3 plays. (Even that was somewhat of a desperation heave by the QB.)

Stevenson looked comfortable enough in making the catches I did review, but we’ll have to see what his NFL team says about his receiving.

The Sooner RB didn’t stand out either way in pass protection, though he did at least look willing and aware while getting a fair number of reps.

Oklahoma listed Stevenson at 246 pounds, but he admitted on the Zoom interview after his Pro Day that he actually played at 235-236 last season. He still shed a little weight to get the 227 of that day, but the 4.63 time in the 40 remained basically identical to how he timed entering college. That’s OK speed for his size. The 40 time matches what David Montgomery ran at the 2019 Combine (at 5 pounds lighter). But it still puts Stevenson a little below average in speed score.

I expect Stevenson to land on Day 3 of the draft. He’s not going to be a special back, but he can be a helpful backfield member. Pro Football Focus’ Mike Renner compares him to Michael Bush, a 4th-round pick by the Raiders in 2007 who had 4 seasons of 120+ carries, a career 3.6% TD rate and 4.0 yards per rush over 7 years.

That makes sense. I also thought of D’Onta Foreman, who posted a huge final college season and went to the Texans in Round 3 but hasn’t accomplished much in the pros.

Stevenson isn’t quite as big as either Bush or Foreman. So perhaps Steelers RB Benny Snell (224 pounds, 4.66-second 40, 4th-round pick in 2019) is more appropriate.

The latest Oklahoma RB shouldn’t excite fantasy owners, but he sits amid a nebulous group of backs in this class whose landing spots and draft capital will be worth watching.