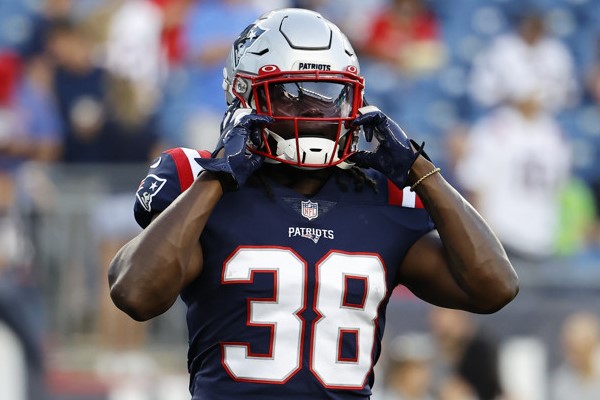 However, beyond carrying the inherent risk of being a Bill Belichick RB, Stevenson will deal with a crowded backfield. Damien Harris enters camp as the #1 back. And if James White — coming off hip surgery — can stay healthy, he figures to assume the primary passing-down role.

So Stevenson doesn’t project well. Still, he’s one Harris injury away from (likely) seeing lead-back touches in an offense that should be improved. There’s league-winning potential here if Stevenson gets the opportunity.

Patriots RB Damien Harris led the backfield in carries (18) and rushing yards (86) in Sunday's OT loss at Green Bay. That included claiming the team's only rushing score. Rhamondre Stevenson ran for 66 yards on 14 carries but also led the team in targets (5) and receptions (4). Stevenson's passing-game usage again found him leading Harris in snaps.

Has Stevenson taken the backfield lead?

Patriots RB Rhamondre Stevenson edged RB Damien Harris in carries (12-11) and touches (16-13) in Sunday's loss to the Ravens. He also outproduced his backfield mate, averaging 6.1 yards per rush to Harris' 3.7. Stevenson added 4-28 receiving (7.0 per catch) vs. Harris' 2-5 (2.5). Each scored a rushing TD. This marked the 2nd straight game in which Stevenson led Harris by more than 15 total snaps and more than doubled his route rate. Although Harris opened the game in the lineup, Stevenson looks like the 1st guy to use going forward. (Of course, it's Bill Belichick's team. So we'll watch to see if that changes.)

Patriots RB Damien Harris appeared to injure his left knee late in Sunday's win over the Steelers. He was able to hobble off the field but was in obvious pain. Stay tuned for an update. RB Rhamondre Stevenson would be the obvious beneficiary of Harris' absence.

The Patriots placed RB Ty Montgomery on IR. No word yet on the specific injury, but he's out for at least the next 4 games. Montgomery finished 2nd among Patriots RBs in snaps (36%) and tied Damien Harris for the RB lead in routes (31%) in Sunday's loss to the Dolphins, finishing with 2 carries and 4 targets. His absence opens up considerable opportunity in the passing game. It's uncertain whether Harris, RB Rhamondre Stevenson or possibly even RB Pierre Strong will capture it.

Patriots RBs Damien Harris and Rhamondre Stevenson each got carries on the 1st offensive possession of Sunday's loss to the Dolphins. They finished nearly even -- Harris 9, Stevenson 8 -- but Harris ran more efficiently. He averaged 5.3 yards per rush to Stevenson's 3.1 and added 10 receiving yards on 2 catches among 3 targets. (Stevenson caught both of his targets for just 2 yards.) Ty Montgomery played through his questionable tag and led the backfield with 4 targets but managed just 15 yards on 3 catches and lost 2 yards on his 2 carries. Expect this backfield to remain frustrating for lineup-setting.

New England reminded us how much it likes a crowded backfield by flirting with Leonard Fournette in free agency. That didn't go anywhere, so Stevenson figures to reprise his role as 1B to Damien Harris' 1A. Harris is set to hit unrestricted free agency in 2023.