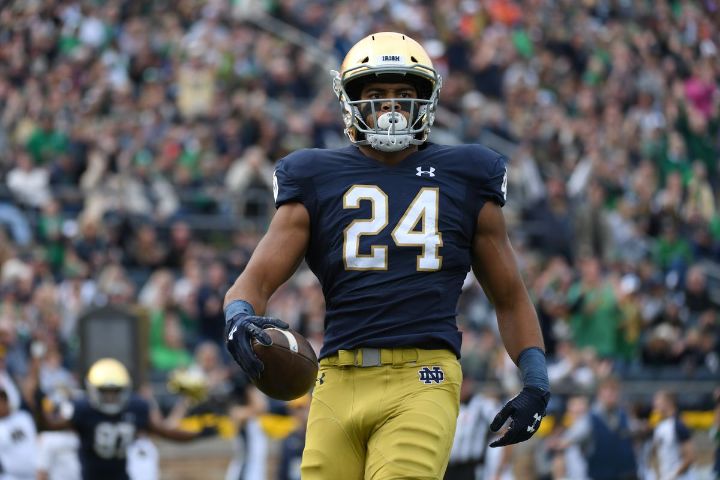 The son of Greg Tremble -- an All-SEC safety for Georgia who played a little as an undrafted free agent in the NFL -- Tommy Tremble began his Georgia high school career on defense. He moved from DE/LB to TE as a junior, though, and racked up a 43-979-6 receiving line. After transferring to a private school, Tremble lost all but 3 games to a senior-year ankle fracture.

The junior numbers proved enough to garner him 25 scholarship offers from both FBS and Ivy League schools, though. That included 7 SEC programs, UCLA, Michigan and, of course, Notre Dame.

Tremble spent his freshman season of 2018 working with the scout team. He emerged the following season to rank 4th on the team in receptions and tied for 3rd in TD catches. Tremble sat well behind WR Chase Claypool (66 catches) and TE Cole Kmet (43), though, as well as redshirt junior WR Chris Finke.

With Kmet and Claypool gone to the NFL in 2020, Tremble caught 3 more balls but actually slipped to 6th on the team in receptions. Star freshman Michael Mayer climbed immediately past Tremble on the depth chart -- at least as a receiver -- more than doubling Tremble’s catch total (42-19).

Despite catching only 35 passes over his 2 active seasons for the Irish, Tremble passed on 2 remaining years of eligibility to enter the NFL Draft.

There’s not a lot to go on here. If you want to see most of Tremble’s receptions, then click the “receiving highlights” link above. I counted 21 catches on that video, which would be 60% of his Notre Dame career total.

Most of those were fairly standard. Tremble doesn’t look like a misfit as a receiver. He looks as fluid moving through his routes as you’d expect from a TE with his athletic profile. And his catches looked clean.

Here’s a solid play at the sideline, where Tremble shows flexibility to turn back for an underthrown ball and then strong hands to secure the reception (even through a defender’s hand-fighting out of bounds).

Tremble was best known for his blocking, though. He often served as the lead blocker on running plays, doing so from a traditional FB set or out of motion in the samples I watched.

Tremble seems to show good awareness for who to block, as well as impressive strength and aggressiveness. Those become even more impressive when you realize he weighs just 241 pounds.

Just about every scouting report you’ll read on Tremble begins by praising his blocking. That’s good. It’ll help him find a team in the NFL. And if he proves strong enough to keep doing that in the pros, it’ll help him get onto the field earlier.

I’ll be curious, though, to see what his coaches say about his role. Will some team draft Tremble because it sees him in the Kyle Juszczyk role -- like Green Bay did with Josiah Deguara in Round 3 last year? That could certainly make sense for Tremble’s team. But it wouldn’t be great news for his fantasy upside. Juszczyk has averaged 1.9 receptions per game since becoming a starter with the Ravens back in 2014.

Tremble’s athleticism makes him worth watching amid a weak TE class. And his decision to come out suggests he was satisfied with his draft-round projection. But he’ll undoubtedly require patience from anyone who drafts him in dynasty.