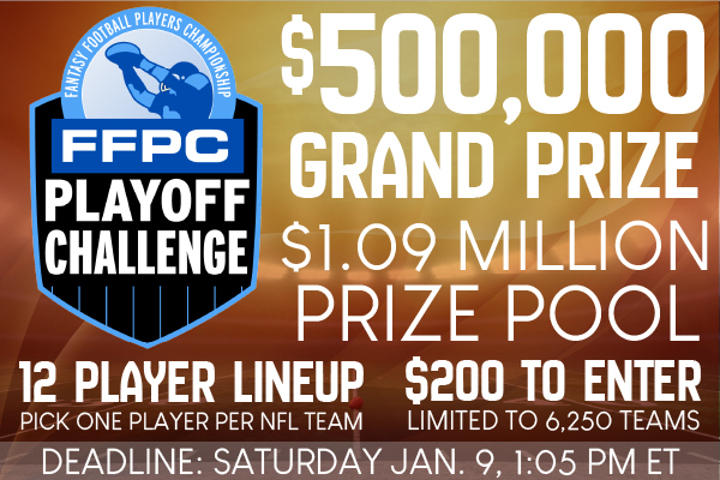 If you’re looking for the answers to the FFPC Playoff Challenge test, you’ve come to the wrong place. I don’t have the answers. And if I did, I’d just use them to win the $500,000 grand prize for myself.

This isn’t a picks article. It’s a strategy guide and data dump. It’s basically everything I’ll be using to put together my rosters.

You don’t need me to tell you that understanding the rules of the fantasy contest you’re entering is important. So I won’t. I’ll just leave the FFPC Playoff Challenge rules here.

I do think there are 2 crucial points to keep in mind when building your roster:

So, like in a DFS tournament, every move we make should be aimed at taking down that 1st-place prize. That might seem obvious, but lots of folks will build lineups that are far too chalky to have a realistic chance at winning.

Like in DFS tournaments, we should be prioritizing upside, taking some risks and getting contrarian with at least 1 or 2 picks.

Figuring Out Who Will Advance

Since we can only pick 1 player per NFL team in this contest, figuring out which teams will play the most games isn’t as important as it is in other playoff fantasy leagues. But we do need to nail the 2 Super Bowl teams. And we also need to predict which 6 teams — or more if a 1-seed loses its 1st game — will play only 1 game. (More on how that should impact player selection later.)

To help with that, here are the 12 teams playing on Wild Card Weekend, ordered from biggest favorite to biggest underdog.

Here are the chances that each team advances to each round of the playoffs, according to FiveThirtyEight.com's model:

We have 12 roster spots to fill. There are 14 playoff teams. So we’re chucking out 2 teams altogether. Those should be the teams you believe have the best chance to go one-and-done AND not have high fantasy scorers in that 1 game.

We’ll also need to pick players, Ks and/or DSTs from 4 teams that will go one-and-done. Two of them should be your K and DST since those are the lowest-scoring positions (and also most difficult to predict on a game-to-game basis).

Picking your 2 players from one-and-done teams is a bit tricky. You might want to hedge a bit and choose guys from the teams you think are most likely to spring upsets. For example, maybe you choose a Brown rather than a Bear because you believe Cleveland has a better chance to win this weekend than Chicago.

But you should also take Wild Card projections into account. In the Browns vs. Bears example, we have Allen Robinson projected for the most points among all skill-position players on those 2 teams. So maybe you go “all-in” on the Browns and Bears losing and go with Robinson instead of a Brown.

One final note: The goal is to have 8 position players still alive in the Divisional Round. That means you shouldn’t, for example, pick the Seahawks defense and no one from the Rams. That’d give you no shot at having 8 players remaining.

We’re looking to maximize the amount of fantasy points we get from every team, so matchups still matter. The tables below show the rankings in adjusted fantasy points allowed vs. every position for every playoff team. (Higher numbers mean a worse defense against that position.)

For your reference, here are the FFPC points per game scored by every player I believe is viable for this contest, sorted from highest to lowest by team. These, of course, don’t take into account current injuries or recent role changes.