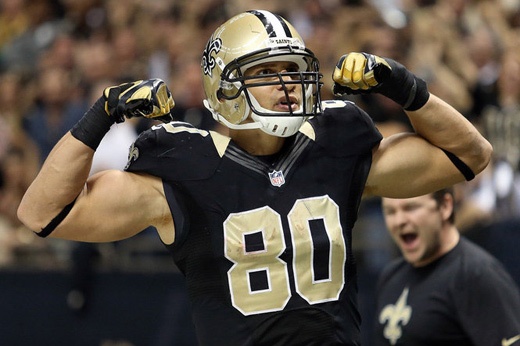 July 4th is the unofficial kickoff of fantasy-draft season. (What’s more American than a fantasy football draft?!?) We’ll be participating in lots of expert drafts over the next 2 months and sharing our picks and analysis for all of them.

Here are the full draft results.

Now for a look at all 16 Draft Sharks picks …

Having Graham is like getting to start an elite WR in your TE spot. His 303.5 PPR points last year ranked 6th among receivers. No other TE came within 85 points of Graham. That’s a massive 5.3-point weekly advantage.

It might feel weird, but don’t be afraid to take Graham in the middle or end of Round 1 in PPR drafts.

Nelson figures to end up on a bunch of Draft Sharks teams this year. We have him ranked 5th among WRs in PPR scoring. That’s 5 spots ahead of his WR10 ADP, which is huge when we’re talking about an early-round pick.

He’s well worth a mid-2nd-rounder and works well as a WR1. Nelson finished a solid 13th in PPR scoring last year but was a total stud when Aaron Rodgers was under center. In their 8 games together, Nelson totaled 810 yards and 7 scores on 49 grabs. That pace over 16 games would have made Nelson the #1 WR in fantasy football. With better injury luck, that’s the type of upside he presents in 2014.

Andre Ellington was the target here, but he came off the board at 3.01. We’ve noticed his ADP climbing over the past month. He may be a late 2nd-rounder by August.

Spiller carries just as much upside as Ellington, though. This guy was a top 6 PPR RB just a couple of years ago. A nagging ankle injury wrecked his 2013, but he finished with 420 rushing yards, 89 receiving yards and 1 TD over his final 5 games. Spiller was a top 18 PPR RB over that stretch.

He does carry significant injury risk, though, so we’ll need to account for that throughout the rest of the draft.

Floyd is one of our favorite 2014 breakout candidates. This is a big, talented former 1st-rounder coming off a 1,000-yard season. He scored just 5 TDs last year, though, a number that he’s capable of doubling this season.

We’ve seen Floyd creeping into the 3rd round lately, which is getting a little pricey. He’s a nice pick anywhere in the 4th, though.

On the strength of 53 catches and 8 TDs, Bell finished 14th among RBs in PPR scoring last year. His role could expand even further in 2014. OC Joe Lombardi brings a power-based running game to Detroit that better fits Bell’s game. And Reggie Bush is nearing the end of the line at 29 years old.

The 6th-round feels a bit early for Maclin, a guy who didn’t play at all last season and has never played in Chip Kelly’s offense. He’s certainly not a safe pick here.

But the ceiling is high. The Eagles were a fantasy-point factory last year, churning out a top 3 RB, a top 12 WR and a QB who ranked 3rd in points per game. Anyone getting significant playing time in this offense carries upside.

Maclin figures to emerge as the Eagles’ #1 WR this year. He’s not DeSean Jackson … but he might be a better all-around WR. He sports better career catch and TD rates than D-Jax. And he finished 2012 with better fantasy numbers.

Maclin could finish anywhere from 10th to 40th this year and we wouldn’t be surprised. But that type of risk/reward profile is fine as your WR3.

Here’s another guy that will be a staple on DS teams this year. Griffin isn’t necessarily cheap -- you’ll need to take him in the 7th if you want to make sure you get him -- but he’s still a big-time value.

We all remember his ugly 2013 campaign, which included just 16 passing TDs, 0 rushing TDs and a late-season benching. But that was gimpy RG3. Healthy RG3 ranked 5th among QBs in fantasy points per game in 2012.

By all accounts, Griffin is healthy heading into 2014. And he gets to work in an offense that made Andy freakin’ Dalton a top 3 QB last year.

Griffin has the potential to lead the position in fantasy points this season. At minimum, we like him to post top 5 numbers as long as he’s on the field.

Is he an injury risk? Sure. But it’s easy to find insurance at the ultra-deep QB position.

Sproles isn’t a guy we’re necessarily targeting in drafts because his role in Chip Kelly’s offense is a total mystery. But we needed a 3rd RB, and Sproles in the 8th is fine value.

We’re not expecting a major ball-carrying role because, well, why would Philly take touches away from LeSean McCoy? But Sproles should be busy in the passing game. And like we mentioned with Maclin, Kelly’s offense raises the ceiling on all Eagles.

Can Nicks stay healthy? Does he even have any gas left in the tank? How much action will he see in a passing game that also includes T.Y. Hilton, Reggie Wayne, Dwayne Allen and Coby Fleener?

Plenty of questions here. But here’s another question: What if Nicks stays healthy and regains the 2010-2011 form that saw him total 2,244 yards and 18 TDs?

That’s the ceiling here. And it’s well worth gambling on in the 9th round as a WR4.

Jackson serves 2 purposes here. He can be a standalone RB3 or flex option. And he’s also a C.J. Spiller handcuff.

Chris Johnson is going 7 rounds ahead of Ivory in average drafts and went 5 rounds earlier in this one.

That’s crazy. Sure, Johnson will get first crack at lead duties. But we’ll see how long that lasts. Ivory might be the better runner at this point.

Even if Ivory doesn’t pass Johnson in the pecking order, New York’s run-first attack could still net him 10 or so carries per game. And he figures to be the primary goal-line option.

Romo was just way too good to pass up in the 12th. He might even start over Griffin depending on matchups. OC Scott Linehan brings his pass-happy offense to Dallas. And Dez Bryant and Terrance Williams give Romo an explosive WR duo.

Douglas won’t approach last year’s numbers as long as Julio Jones and Roddy White are even halfway-healthy this season. But he’s not going to disappear either.

With Tony Gonzalez (finally) hanging up the cleats, the Falcons are expected to deploy more 3-WR sets this season. That means more playing time -- and more targets -- for Douglas.

He displayed impressive chemistry with Matt Ryan last year, hauling in 67.5% of his targets. If he can garner even two-thirds of Gonzalez’s 119 targets from 2013, Douglas could be a valuable bye-week fill in.

A little earlier than normal for a defense, but I figured my final 2 targets would be available in the 15th and 16th rounds. And this Rams defense has the potential to finish #1 in fantasy football this year.

They ranked #2 in most formats last year, finishing 3rd in sacks, 3rd in TDs and 8th in takeaways. They have a young core in DE Robert Quinn, LB Alec Ogletree and CB Janoris Jenkins that should be even better in 2014. And they added pocket-pushing DT Aaron Donald in the 1st round of May’s draft.

Tavon Austin is a dynamic threat in the return game.

We’ve been talking up McCluster for the past month. Evidently not enough to raise his ADP, though.

That’s fine with us. We’ll keep taking him at the end of drafts. McCluster is set to play a change-of-pace role in new HC Ken Whisenhunt’s offense. The same offense that just produced a 76-catch season from Danny Woodhead.

McCluster’s ceiling might not sit that high. But 50 catches are within reach.

Floyd continues to fly under the radar.

This guy was a top 36 WR in 3 straight seasons from 2010 to 2012. Then he racked up 149 yards in less than 2 games last year before suffering that season-ending neck injury.

Floyd has received full medical clearance and appears to be locked in as San Diego’s #2 WR this season. We like him as an upside bye-week option. 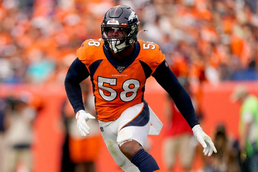 From Cowboys-Bucs to Ravens-Raiders, we're hitting every game to talk sleeper plays, guys to avoid and how to sort those rookie wideouts ...