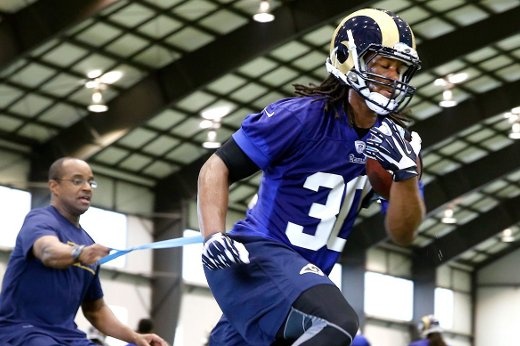 A 1-round move was a big deal back in June and July. But ADP is a different beast now. As the tidal wave of NFL news washes over us, players’ prices are making big swings.

The Mid-August ADP Report features 8 guys that have moved 20+ spots over the past couple of weeks. Keeping up with these changes is a key part of dominating your draft.

With that in mind, let’s take a look at 17 of the biggest ADP movers in the 1 st half of August.

Drafters are finally starting to catch on to the fact that Bradford is a good bet for QB1 production in HC Chip Kelly’s fast-paced offense. There’s still plenty of value at his current 11 th-round ADP. Bradford is the 15 th QB off the board in average drafts.

Fitzpatrick was picked in just 4 of 106 MFL10 drafts over the first 3 days of August. Since the Geno Smith news broke on August 11 th, Fitzpatrick has been selected in 93 of 222 drafts. A sneaky-good athlete with a promising history in OC Chan Gailey’s offense, Fitz makes sense as a 3 rd QB in best-ball leagues.

Abdullah shot up a full round over the first 2 weeks of August. He might appear on our late-August ADP Report, too. The rookie has been buzzing throughout training camp and ripped off a 45-yarder in the preseason opener. He still makes sense at this early-4 th-round price tag, but another big jump could make Abdullah overpriced.

Martin also appeared as a Riser in the July ADP Report. He climbed a half-round last month and almost a full round in the first 2 weeks of August. He might price himself off our radar if he climbs safely into the 5 th round. Martin has reportedly had an excellent offseason, but concerns remain about the offensive line in front of him.

Blue is the current favorite to serve as Houston’s lead back while Arian Foster is sidelined. He had a strong preseason opener, carrying 9 times for 59 yards. Blue isn’t a bad pick in the 9 th round, but we don’t see a ton of upside – and it’s still unclear exactly how long Foster will be out.

Royal was climbing draft boards even before we learned that Kevin White needed shin surgery. Since that news, Royal’s ADP has actually been at 120. That’s a fair price tag for a guy who could catch 60+ balls as Chicago’s #2 WR.

Crabtree has had a strong training camp and hauled in 2 of 3 targets in limited action in the preseason opener. We’re still not banking on a big bounce-back season, but Crabtree is a fine shot to take in the 12 th or 13th round.

Marqise Lee’s continued durability problems and Hurns’ impressive offseason have him looking like Jacksonville’s #2 WR. As a rookie last year, Hurns averaged 13.3 yards per catch and led the team with 6 receiving TDs. He’s a nice late-rounder, especially in best-ball drafts.

A healthy Eifert has dominated in camp and hauled in both of his targets for 30 yards in the preseason opener. There’s breakout potential here – and still value at his current 10 th-round price tag.

Foster figures to be 1 of the most volatile players in drafts over the next few weeks. Since we learned of his groin injury, he’s gone as early as the 5 th round and as late as the 11 th. His RB1 potential when he returns makes him worth a shot at some point. How early you’re willing to draft him depends on the makeup of your roster and your risk tolerance.

Drafters have reacted to the negative news on Gurley over the past couple of weeks. It doesn’t look like the rookie will be a fantasy asset early on, but he could still emerge as a must-start later on. He’s more fairly priced now than he was at the beginning of August.

Coleman missed about a week-and-a-half with a hamstring injury. He returned to practice on Monday, August 17 th and still has 3 preseason games to make a run at the starting job. Coleman’s price drop into the late 6 th round makes him a much more intriguing pick.

After buzzing all spring, Johnson has missed most of training camp with a hamstring injury. That’s lowered his price in drafts. Neither Isaiah Crowell nor Terrance West has impressed in Johnson’s absence, though, so the rookie still has a chance to claim a significant role.

Ajayi struggled with pass protection and ball security early in camp and then missed the preseason opener with a bum hamstring. He’s still 4 th on the depth chart and isn’t worth rostering in standard-sized fantasy leagues right now. We’ll see if the rookie can make up ground over the next few weeks.

Since dislocating his fingers on August 5th, Floyd’s ADP has settled in the late 9th/early 10 th round. That’s a 2-round discount from where he went in July drafts. Floyd still has plenty of upside as a 25-year-old, 6’2, 220-pounder with 4.4 speed.

Lee has missed the past 2 weeks with a hamstring injury, and there’s no timetable for his return. Meanwhile, Allen Hurns has taken hold of the #2 WR spot. Lee isn’t even getting picked in some 20-round MFL10s.

Ertz’s ADP dropped from the late 7 th round to the mid-8 th in July. It’s dropped by another round-and-a-half through the first 2 weeks of August. Ertz has quickly gone from overvalued to undervalued – even with his recent groin surgery.